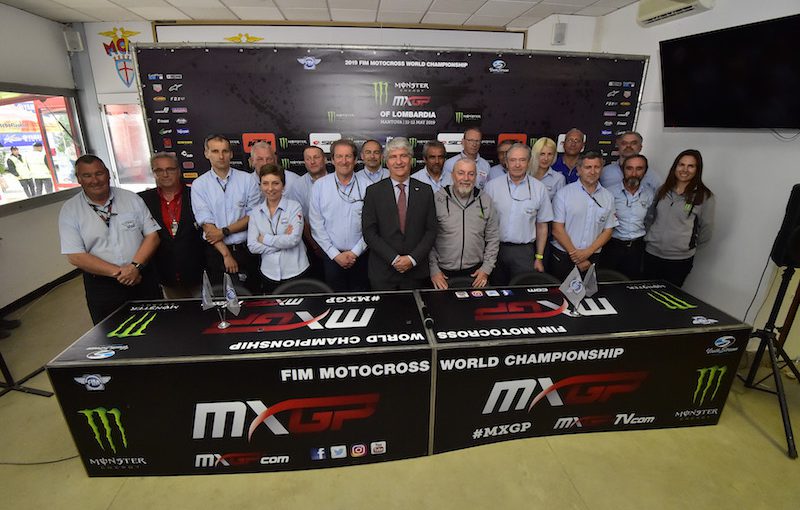 Following on from the ground breaking presentation made during the opening MotoGP event in Losail, Qatar back in March, FIM President Jorge Viegas has now used the occasion of the fifth round of the 2019 FIM Motocross World Championship in Mantova, Italy to again highlight and reinforce the important role that the International Federation plays within another highly successful series.

The FIM President addressed a large gathering that included members of the International media, plus other invited guests in the form of Youthstream President Giuseppe Luongo, Youthstream CEO David Luongo FIM Board Member / FMI President Giovanni Copioli and Monster Energy MXGP of Lombardia Organizer Giovanni Pavesi plus representatives from both FIM Europe and the Mantova Circuit.

The new FIM President explained that it is his aim to champion the role of the FIM to the outside World, and to clearly show how its function is fundamental to the safe and fair running of the championship through the services, support and staff that it provides.

Mr Viegas set out the FIM’s mission within MXGP is to create the rules together with the Promoter and to apply the rules and the relevant sanctions issued by the FIM Stewards panel. The FIM is also in charge of circuit homologation, safety including all medical aspects and the antidoping programme. The FIM’s remit also covers the training of the officials, including the race director, clerk of the course, marshals, the technical and environmental stewards. This important training is conducted through FIM seminars delivered by FIM instructors around the World to teach the 100 to 120 track marshals needed during a MXGP weekend.

Particular attention is being given to the transformation and consolidation of investment to the championship in order to improve the safety and design of the circuits. This is being done by employing permanent staff to take care and oversee any changes that are required. Another area of focus is to provide medical recuperation and assistance where needed post-accident.

Having clearly set out the position of the FIM, the FIM President then invited each member of the FIM staff who were in attendance to present themselves and to explain their role within the MXGP structure. The invited speakers included:

Following the presentations of each of the FIM staff, the FIM President Jorge Viegas added his own closing comment. “After my election, one of my goals was to expose the FIM to the outside World and to explain the fundamental role it plays in each championship, to ensure the safe and fair running of the championship through the services, support and staff that it provides. To do this, I am fortunate to have the support of a team of highly motivated professionals and it is for this reason that I wanted to organise this press conference to present them to you. Through our close collaboration with Youthstream the promoter of the Championship since 2003 and all the other stakeholders, together we will continue to work closely to maintain MXGP as the top class amongst the off-road disciplines.”