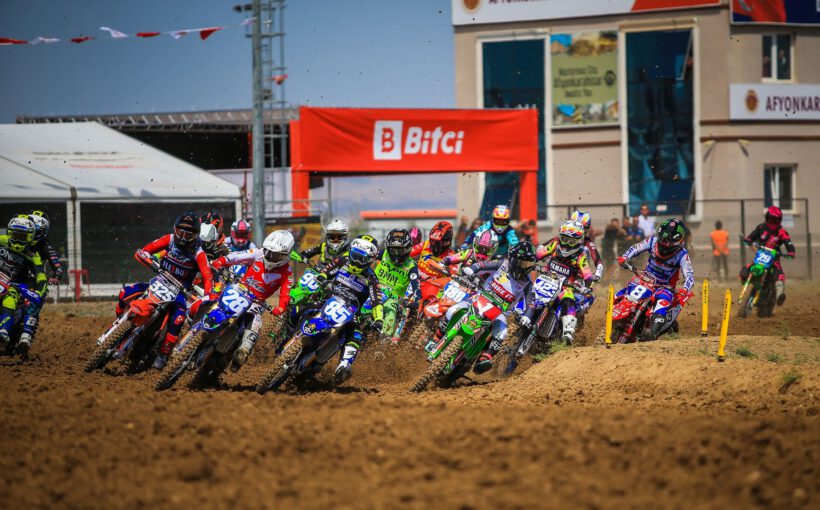 Fontanesi takes a hard-fought victory at the round of Afyon.

Round four of the FIM Women’s Motocross World Championship has concluded with MX Fonta Racing GasGas’ Kiara Fontanesi taking an emotional and hard-fought overall victory to claim her first 1-1 result since 2018.

Both races saw incredible battles between Fontanesi and Bike IT MTX Kawasaki’s Courtney Ducan as we were treated to a race fight to the flag.

In race one, it was Larissa Papenmeier of Yamaha Racing 423 who grabbed the holeshot ahead of Duncan, Fontanesi and Ceres 71 Racing’s Nancy Van De Ven. Papenmeier then dropped out of the lead as Fontanesi was quick to make moves on the opening lap as she moved into first place.

Van De Ven then took fourth from Papenmeier, as Duncan set the fastest lap of the race and was looking to close in on Fontanesi. The Kiwi then took the gap down to 0.948 and kept the pressure there until the end of the race.

Amandine Verstappen then got around Shana Van Der Vlist for fifth after several attempts, as the two leaders started to pull away from Van De Ven. Further down the field, Sara Andersen and Daniela Guillen of RFME WMX Team battled for seventh position. Andersen eventually was able to get the job done and she finished the race in the same place.

Duncan then set the fastest lap of the race as she once again brought the gap down to under a second and then it was a drag race to the end.

The final two laps were intense to say the least as Duncan gave it her all as she pushed on the final corner to race Fontanesi to the flag. Though it was Fontanesi who secured the race victory by just 0.050 seconds.

While Fontanesi led the way, Papenmeier found herself under pressure from Van De Ven who was keen to get around the German. Van De Ven made several attempts though could not make it happen. Andersen was also right there in sixth position.

Fotnanesi then stretched her lead to 3.256 seconds with Duncan second and Van Der Vlist still third. Though as the race progressed it was clear that Duncan was not going to let the race leader get away as she upped her pace.

Papenmeier then found herself on the back wheel of Van Der Vlist as her and Van De Ven were coming in fast. Both riders set their personal fastest laps of the race as Papenmeier got around Van Der Vlist for third.

Drama struck Duncan who went down as she fought for the win. Though determined to not let the win slip away, the Kiwi gave it her best show as she managed to whittle down the gap from almost 14 seconds to 1.4 seconds within just a couple of laps.

With three laps to go Duncan was all over Fontanesi and we saw a repeat of the first race. Both riders fought hard, as Duncan sprinted for the finish, but it was Fontanesi who held onto the win to go 1-1 and finish her Turkish trip on a high.

Fontanesi stood on the top step of the podium, while Duncan was second and Papenmeier third.

Duncan continues to lead the WMX championship, 11 points ahead of Fontanesi and Van De Ven who moves up in the standings.

Kiara Fontanesi: “I am really happy for many reasons because a victory is always a victory. Coming back from pregnancy a year off, I had to really worked hard to be back to the podium. I knew I was competitive to be fighting for the victory and I’ve seen it already from the first round here, I knew it already from the beginning of the championship. But things were just not going well, I always believed. It is also very special for me because it’s another goal achieved, winning an overall GP as a mom. To see yourself first from the beginning to the end is something very special and I think I will keep this victory inside myself for a very long time!

For sure, it’s also good points for the championship. I did not really think about this because it is what makes you do mistakes and I just want to enjoy. If I can enjoy then I can ride good, and if I ride good, then I can win. And if I win, then I can take good points. So, this is the way I think”.

Courtney Duncan: “It’s frustrating. But hats off to Kiara, she was better on the day and she deserves the victory. Silly mistakes, it was not from a lack of trying, I pushed till the finish line but that’s the way it goes sometimes. I still keep the red plate and it is all positive moving forward, so I am looking forward to the next race. Now I will just continue to work. The speed is good, everything is working good… I just need to keep on these ways and keep doing what we are doing”.

Larissa Papenmeier: “My speed for the first two races was not enough. Not on Saturday and not today, but I knew that I had the speed for the top three and to finish on the podium. Saturday was really frustrating, but I had to do better today. First race was not great but I made some changes for the second one to finally be back on the podium. We have kind of a big break now. Also, the track in Spain is new for everybody, so I am really looking forward to it”.