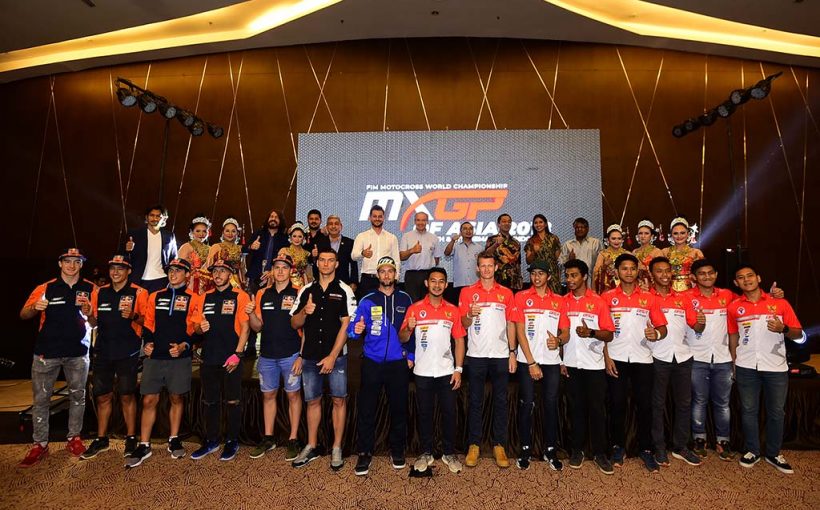 MXGP of Asia Events Start Up in Semarang.

The 2018 MXGP of Asia is less than 24 hours away from racing and the first events of the weekend have already taken place. The beautiful Semarang, Indonesia is the welcoming host venue of round 13 and today was the focus of 2 media events.

Home to nearly 2 million people the tour first headed through the city with a dedicated tour guide to points of interest and explaining the history of the area. The guests were given traditional food and drink of Semarang as a welcoming gift.

Marking first stop of the tour was the Chinese temple Sam Poo Kong also known as Gedung Batu Temple. The Temple is the oldest of its kind in the area originating from the early 13th century. Though now a major tourist attraction the location is still a sight of worship. MXGP’s Tour members first took in the sights of the temple before watching a traditional Chinese lion dance (Barongsai) and Reog an Indonesian traditional dance. Joining together the riders took family photos before receiving a parting gift and continuing the tour.

From Sam Poo Kong the trip drove through China Town and continued to the Old Town of Semarang from its time as a Dutch Colony. Stopping in the heart of Old Town riders and guest walked through the streets to a creative gallery before a group photo in front of a landmark Protestant church founded in 1753 to close the tour.

he evening carried on and for the second event of the day the paddock headed to an upscale Semarang hotel for a welcoming meet and greet. The ballroom of the Gumaya Tower Hotel hosted an opening dance performance in traditional form with a video presentation and speeches from the officials in attendance such as Youthstream Vice President Mr. David Luongo, FIM Asia President Mr. Stephen Carapiet, FIM/CMS Director Mr. Tony Skillington, Mayor of Semarang Mr. Hendrar Prihadi, S.E. M.M, Chief of the IMI Mr. Sadikin Aksa and Executive Director of KTM/Husqvarna Mr. Selvaraj Narayana.

To close the event all the riders and notable figures took the stage for a family photo before taking in a specially prepared dinner. The riders, teams, media, and thousands of welcoming fans now gear up for tomorrow’s highly anticipated Qualifying races at the new circuit of Semarang for the inaugural MXGP of Asia.