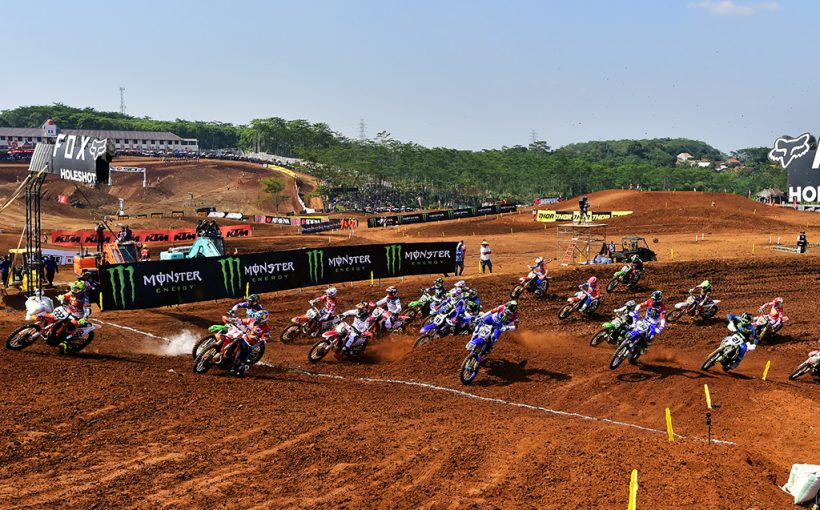 MXGP onto Semarang for the MXGP of Asia

The FIM Motocross World Championship is ready to race this weekend for the second of the two Indonesian rounds and for the second year in a row the MXGP of Asia is going to be held in Semarang, Indonesia. The area of Semarang, which is very similar to the one of Palembang, home of 1.5 million people but on a different island, central Java, will welcome the MXGP and MX2 riders this weekend on his amazing red dirt.

Last weekend at the MXGP of Indonesia when the 2019 FIM Motocross World Championship visited Palembang it was Team HRC’s Tim Gajser and Red Bull KTM Factory Racing’s Jorge Prado who walked away with the victories in MXGP and MX2.

In MXGP it is Team HRC’s Tim Gajser who is in complete control of the MXGP championship, he has momentum on his side after winning the last six GPs and seven in total this season and now that Red Bull KTM Factory Racing’s Antonio Cairoli announced he is out after a surgery on his right shoulder the championship chase is wide open for new histories.

While Monster Energy Yamaha Factory MXGP team’s Romain Febvre and Jeremy Seewer are looking at making life hard for the red plate holder in Semarang this weekend, they both are looking forward for a GP win. Both made the podium last weekend and expect them to be in amongst the points this coming weekend. Febvre won his first race in Palembang after the MXGP of Sweden in 2017 and he looks confident to repeat it, while Seewer, who now stands third in the championship, 9 points ahead of Paulin, doesn’t have a fantastic memory from Semarang as in 2018 he had a big crash but he keen on line up for a better result.

Also, Gautier Paulin and Arnaud Tonus from Monster Energy Wilvo Yamaha Official MXGP teamwill line up not only to try to return to the podium, after missing it last weekend but for a round win as well. Both love the Semarang circuit and it suits their styles.

Rockstar Energy Husqvarna Factory Racing’s Pauls Jonass and Arminas Jasikonis will also be looking to work a little harder and get within the top five. Both are well placed in the championship points with Jasikonis sixth and Jonass eight in the standings. Pauls Jonass experienced already the clay track of Semarang in MX2 class in 2018, he felt confident for the whole GP and reached the second step of the podium.

The pair from Standing Construct KTM, Max Anstie and Glenn Coldenhoff have also shown good form in recent time but will want to improve on their championship positions with good performances in Semarang after the 4th and 5th overall results in Palembang. Coldenhoff is the leading privateer rider in MXGP at the moment.

In the MX2 class Red Bull KTM Factory Racing’s Jorge Prado dropped one of his very few races last weekend in Palembang, when he was beaten in the second race by Rockstar Energy Husqvarna Factory Racing’s Thomas Kjer Olsen. Of course, Prado still goes into the 12th round of the championship as a heavy favourite to win and add to his already impressive list of victories in 2019 and his 2018 MXGP of Asia win.

Monster Energy Kemea Yamaha Official MX2’s Jago Geerts and Ben Watson have had up-and-down results lately, but both are more than capable of not only finishing on the podium, but actually winning a GP. Attendance of Watson at the MXGP of Asia is anyway yet to be confirmed.

In Palembang last weekend it was obvious that a number of MX2 riders are loving the Asian temperatures and atmosphere, as several showed brilliant speed. Red Bull KTM Factory Racing’s Tom Vialle, Rockstar Energy Husqvarna Factory Racing’s Jed Beaton, Team SM Action Yamaha Maxime Renaux and F&H Racing’s Henry Jacobi will go into this coming weekend knowing that they can battle with Prado, as most of them did last weekend.

Calvin Vlaanderen from Team HRC made his long-awaited comeback and showed class and resilience when he finished seventh overall and scored a strong fourth place in the opening MX2 race. Expect him to again shine this weekend as he finished top three at Semarang in 2018.

Honda 114 Motorsports’ Mitchell Evans has to withdraw from the MXGP of Asia this weekend as he was struggling in Palembang last week. Evans will be lining up again at the 13th round of the FIM Motocross World Championship in Loket, Czech Republic.