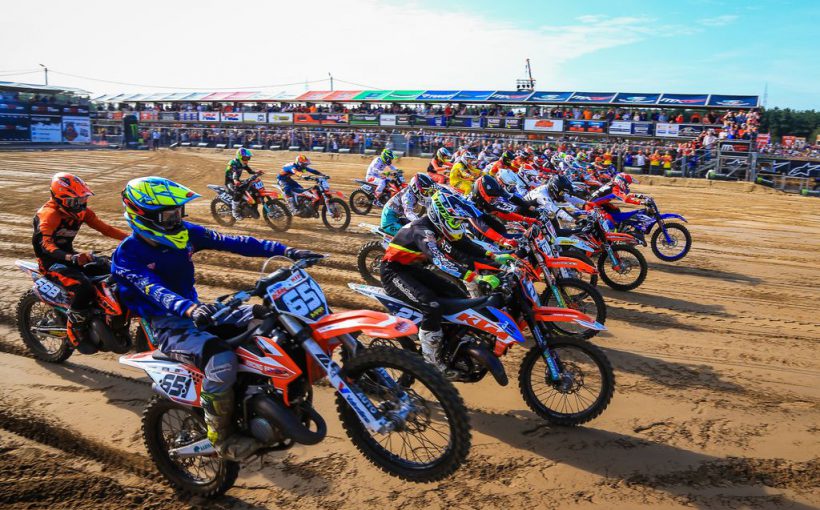 The EMX250 and EMX125 presented by FMF Racing continued their championships stories in Lommel at the MXGP of Belgium, and once again it was the sand masters who came out and showed amazing skills around one of the toughest circuits in the World.

F&H Racing Kawasaki’s Roan van de Moosdijk is the king of the sand in the EMX250 class, going 1-1 and taking the points’ lead in the series standings heading to the next round in Sweden. The Dutchman was a level above his competition as he clocked lap times bunch of seconds quicker than the other EMX250 riders, Creymert Racing’s Kevin Horgmo was second overall and Rockstar Energy Husqvarna Factory’s Mikkel Haarup third.

In the EMX125 presented by FMF Racing it was WZ-Racing’s Simon Laengenfelder who scored 2-1 results to win the overall, ahead of series leader Maddii Racing Husqvarna’s Mattia Guadagnini and Team VRT’s Tom Guyon. Guadagnini continues to lead the series by 20 points over Guyon.

In the second EMX250 race it was Van De Moosdijk who led early from Horgmo, Raivo Dankers, Bastian Boegh Damm and Rene Hofer. Rubini was down in seventh place. After just one lap the lead was already more than five seconds as the Dutchman was showing off his sand skills. A lap later the lead was nearly 10 seconds.

Forato moved into second place when he passed Horgmo, and Rubini crashed and dropped to 10th place. Not a lot changed with Van De Moosdijk moved to 30 seconds ahead of Forato on lap eight, then came Horgmo, Dankers and Boegh. Rubini remained in 10th place.

With a 32 second lead Van de Moosdijk slipped over in a corner, but still had an easy lead when he got up and just to make matters even better for the leader, Rubini dropped out of the top ten and was in 13th. Van De Moosdijk won race 2 from Forato and Horgmo and getting is double race win of the season and the Red Plate for the first time in his career. The Dutch rider got in the Belgian round in thirst position in the series and will head to Switzerland leading the series with 11 point over Rubini.

Roan Van De Moosdijk: “I didn’t know I had the points lead until the end of the race. The start today was good, and I controlled the races even if at the end I got tired. It’s been always a dream to have a red plate and now I have it, and close to home with all my family and friends here to see it. I want to thank my team and my trainer”

RFX KTM’s Joel Rizzi took the holeshot in the opening EMX 125 race but it was Maddii Racing Husqvarna’s Mattia Guadagnini who took the lead quickly and just walked away from the field. Second was WZ-Racing’s Simon Laengenfelder, and third Team VRT’s Tom Guyon. INI KTM Junior Pro Team’s Mike Gwerder finished in fifth and lost ground on the two front guys in the points race.

The second EMX125 presented by FMF Racing race proved a surprise as Laengenfelder took the lead on Guadagnini and Guyon on lap 3. After five laps the lead was five seconds as the German rider showed amazing sand skills. Rizzi was also looking good in fourth position ahead of fifth placed Kay De Wolf. Laengenfelder rode brilliant to remain in control and winning from Guadagnini and Guyon.

Simon Laengenfelder won his first EMX125 Presented by FMF Racing round of his career with his 2-1 and he stands third in the championship while Mattia Guadagnini keeps the red plate.

Simon Laengenfelder: “I had the holeshot and Guadagnini passed me then I passed him back.  I am so happy with the victory. I want to thank my team. This is unbelievable.”