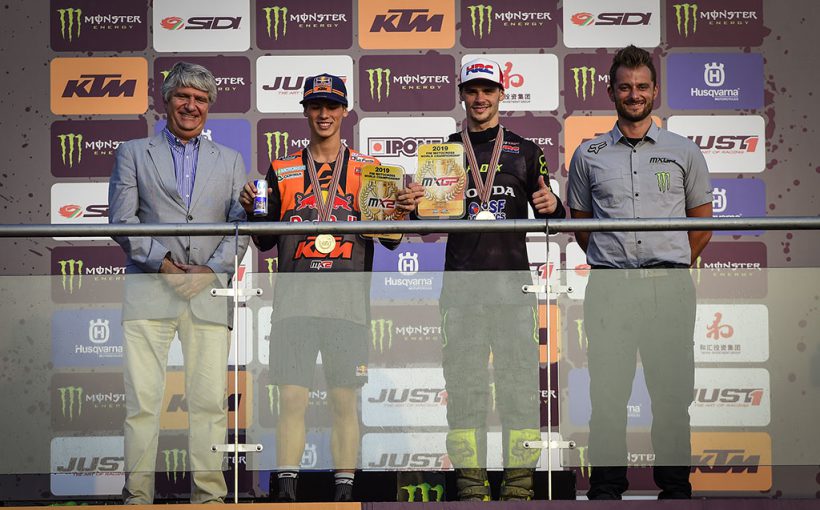 Outstanding End to the 2019 Season in Shanghai.

Seewer had passed Coldenhoff but was repassed and then crashed in a corner as Herlings moved into second place. Seewer again crashed as he dropped to seventh place. Coldenhoff continued to control the race, although after five laps the lead was down to just over two seconds and Gajser was five seconds back in third place while the two Rockstar Energy Husqvarna Factory Racing’s Arminas Jasikonis and Pauls Jonass filled the remaining top five positions. Seewer was sixth, Standing Construct KTM’s Ivo Monticelli seventh, Honda Motoblouz’Jeremy Van Horebeek eight, Monster Energy Wilvo Yamaha Official MXGP’s Gautier Paulin ninth and Team VRT’s Jordi Tixier in 10th.

After nine laps Herlings was just over two seconds behind Coldenhoff and made a move for the lead. 11 laps in and Paulin dropped back to eight while Tixier moved into ninth place.

Herlings was suddenly all over Coldenhoff as the race heated up and to make it even more exciting, Gajser joined the party. For a couple of laps the big three battled for the top spot, and the pace clearly went to another gear.

The second MXGP gate dropped and Seewer took the FOX Holeshot, but got passed by Coldenhoff who lead again, Gajser was in third, then was Van Horebeek, Herlings, Bogers, Jonass, Paulin, Monticelli and Jasikonis who rounded up the top 10. Herlings quickly passed Van Horebeek and was onto Gajser for third.

After a lap Coldenhoff was a second and a half ahead of Seewer who was fighting off Gajser, with Herlings fourth and Van Horebeek fifth. Tixier had worked his way into 10th place as Jasikonis dropped to 12th.

After three laps the lead remained a little over a minute while Gajser miscalculating a jump ran off the track, having to pull the board from his machine and lost places to Herlings, Van Horebeek and Jonass as he dropped to sixth position. On lap nine Gajser passed Jonass for fifth, and Seewer was still a second and a half behind Coldenhoff.

Herlings was all over Seewer for second place as he tried to get an overall victory while Coldenhoff continued to ride in cruise control and at the pace he was comfortable. Herlings made a move to take second place from Seewer and the race of the Dutchman would continue.

Coldenhoff remained calm and continued to lead Herlings, with Seewer third, Van Horebeek fourth and Gajser fifth. After 14 laps Coldenhoff was nearly three-second lead over Herlings and seemingly did enough to win the race and the Grand Prix while Gajser passed Van Horebeek for fourth position. Herlings turned it up in the final three laps and caught Coldenhoff, then he pulled into the lead on the last lap as he won the Grand Prix with 2-1 results.

While Team HRC’s Tim Gajser climbed again the MXGP Podium to be awarded with the Gold Medal, Monster Energy Yamaha Factory Racing’s Jeremy Seewer celebrated the 18th round of the Championship with a silver media ensured just after race 1 and Standing Construct KTM’s Glenn Coldenhoff clinched the bronze medal after an unpredictable season.

Tim Gajser: “I am very happy to win my third World championship title. We had a great off-season, the beginning was just amazing and then I won seven rounds in a row which was so special. Now at the end of the season I am struggling and not finding the flow unfortunately. Coming to this weekend I felt good, yesterday I was fast on the track and enjoyed it. In the qualifying race I had the holeshot and then made a mistake and hit my neck and I was sore. From 11th gate pick today I took two solid starts and we were close to Jeffrey and Glenn. Second race I was feeling good but jumped off the track and unfortunately I just missed the podium”

Jeremy Seewer: “I felt really good all weekend on the track, and it was a really nice dirt today. I wasn’t going for the championship but I was pushing in the first race because I felt amazing, but things happen. I got a rock in my eye and then cut my chin when I crashed and I was fighting hard to get third position. I didn’t want to risk too much anymore. That’s amazing to get second in the championship. A big thank to my team for this season.”

Glenn Coldenhoff: “I feel like we did a great job this weekend. It was a solid start in the second race and I was second and led all the races, I started making mistakes and I was looking at the bigger picture that is the bronze medal and I got a podium, which was good. First race was great. I am so pumped, I knew I needed a great gate pick and I was able to hold of Jeffrey (Herlings) and Tim (Gajser).

Overall winner Jeffrey Herlings: “The first race I just couldn’t make to win but I am very thankful to win the last two races of the season and I am looking forward to next year. I wanted to save some energy in the first race, but the second race I missed the start a bit and it was a bit tricky. I managed to win it at the end, and I am pretty happy. I want to thank the team and my personal sponsors.”

On lap two Geerts passed Van De Moosdijk and set out after Vialle, around the same time Olsen also passed Renaux. Rockstar Energy Husqvarna Factory Racing’s Thomas Kjer Olsen moved up to third place, followed by Vialle and then Vialle passed Olsen for third place, Geerts was also pushing the Danish rider, with Van De Moosdijk not that far back in sixth place. Geerts passed Olsen on lap 11, and the top five was Prado, Vlaanderen, Vialle, Geerts and Olsen.

After 13 laps Prado led Vlaanderen by four seconds, with Vialle third, Geerts fourth and Olsen fifth. Van De Moosdijk exchanged positions for a few laps, with the Dutchman finally making a mistake and dropping back outside the top ten, in fact way back in 16thplace and seemingly out of the race. Prado won the first race in Shanghai from Vlaanderen and Vialle.

Prado led the second MX2 race taking the FOX Holeshot with Vialle second and Geerts third. Just behind Geerts was Olsen and Moreau, while Vlaanderen was back in sixth place. After a lap Prado was one and a half seconds ahead of Vialle, then Geerts held third, Olsen fourth and Vlaanderen fifth.

Four laps in and Prado wasn’t pushing too hard as the lead was still just over a second, with Vialle second, Geerts third, Olsen fourth and Renaux moved into fifth. After seven laps it was Prado leading by two seconds, and Vialle a further three seconds ahead of third placed man Geerts. Olsen was fourth and Vlaanderen in fifth.

Vialle started closing up on Prado as the two KTM riders controlled the race up front while Geerts was in third. Vlaanderen passed Renaux, as Van De Moosdijk did. On lap four Vlaanderen passed Olsen but was seven seconds behind third placed Geerts with three or four laps remaining.

Suddenly Vialle was all over Prado for the lead and the GP wins, as the two teenagers fought for the victory. Once again it was Red Bull KTM Factory Racing’s Jorge Prado whohas won the MX2 class at the JUST1 MXGP OF CHINA presented by Hehui Investment Group with another perfect day and 1-1 results. It was Prado’s 31st Grand Prix win in his MX2 career as he now starts to prepare for the Monster Energy FIM Motocross of Nations and his MXGP debut at Assen, The Netherlands in two-week’s time. Second overall was Red Bull KTM Factory Racing’s Tom Vialle with 3-2 results and third Team HRC’s Calvin Vlaanderen with 2-4.

Red Bull KTM Factory Racing’s Jorge Prado made a statement at his last race in MX2 going on the Podium not only as GP winner but to collect his Gold Medal, while Rockstar Energy Husqvarna Factory Racing’s Thomas Kjer Olsen stood in the second position of the podium after a consistent 2019 season and Monster Energy Kemea Yamaha Factory Racing’s Jago Geerts managed to collect the bronze medal.

Jorge Prado: “I’m happy to finish my MX2 career this way. I want to thank everybody from my team and everyone who helps me. It was an incredible season, many race wins and Grand Prix wins, and it is exciting to move to the MXGP class, we will work hard for that.”

Thomas Kjer Olsen: “It was a consistent season, the first part of the year was just amazing, the second part of the season was not as I wanted but overall I’m happy with my second position. I’m already thinking of how to improve next season “

Jago Geerts: “I arrived in China with a few points and I managed to win, my season had some ups and down but I’m very happy about my third position. I’m looking forward to the Monster Energy FIM MXoN now and I hope Team Belgium can be again on the podium.”