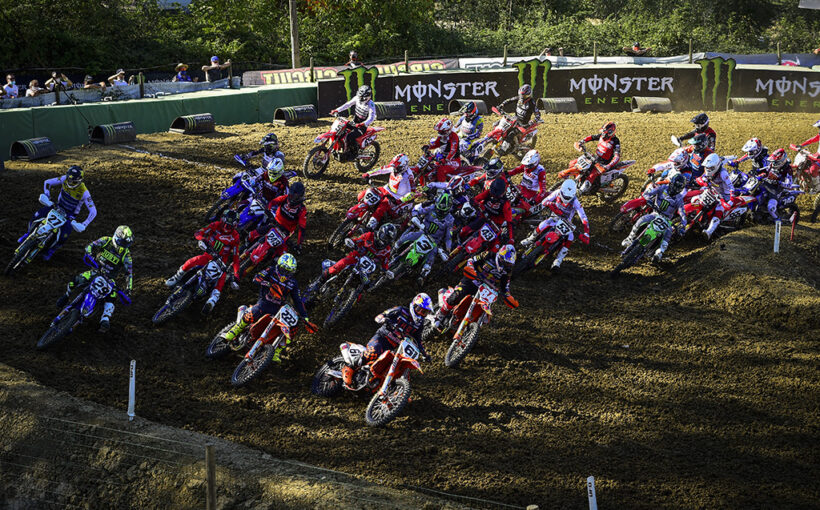 MXGP set for more action for the MXGP of Città di Faenza!

Six rounds down, 13 to go – as the FIM Motocross World Championship continues its run in Faenza for the first Italian triple-header of the season.

A new Grand Prix will hand the riders a brand-new opportunity to repeat their success and for others the chance of redemption following some unlucky moments. Though with the races we witnessed yesterday, a clear winner is hard to predict.

Tomorrow things will kick off with European championship races, with the EMX2T Presented by FMF Racing riders taking to the track first.

Verde Substance KTM rider Brad Anderson will no doubt be looking to add another podium and extend his championship lead as early on in the series as he can, following a 2-1 result at the previous round here in Faenza. Though chances are, it won’t be that simple, as he will have the likes of Loris Freidig, Federico Tuani of Husqvarna Junior Racing Maddii and Manuel Iacopi from JK Racing Yamaha, just to name a few, who will be keen to challenge for top results.

While in the EMX125 Presented by FMF Racing class, Fantic Racing’s Andrea Bonacorsi will be pushing for another double race victory as he aims for the top spot of the podium. The championship also hangs in the balance, with Bonacorsi and Liam Everts of KTM Liamski tied on points. And with Everts out due to an unfortunate injury, it leaves the door open for Bonacorsi to take the lead.

Though he will without a doubt come under threat from the likes of Guillem Farres and David Braceras of the RFME GasGas MX Junior Team, Constantin Piller, among others.

In MXGP, Jeffrey Herlings of the Red Bull KTM Factory Racing squad will be keen to carry the momentum from the previous round and repeat his double race success and add another GP win to his growing record.

Though he is not the only one keen to win and having seen how hard Jeremy Seewer from Monster Energy Yamaha Factory Racing was pushing in the two races yesterday, a good start could be all the Swiss needs to finally get sought after win. His team-mate Gautier Paulin was also looking strong in the races as he battled in the top 5, though an unfortunate crash in race two cost the Frenchman a good overall result. But a new GP is another opportunity for Paulin to shine.

Of course, Antonio Cairoli of Red Bull KTM Factory Racing will be looking to continue his positive run at home, following a third overall yesterday. The Italian showed great speed in the races, though a couple of mistakes early in the races cost him a bit of time. Nonetheless, from what we have seen so far, Cairoli has what it takes to continue battling with the top runners and fight for top podium positions.

Fellow Factory KTM rider Jorge Prado was impressive yesterday, leading the majority of both the MXGP races, though running out of steam towards the end which allowed Herlings to take full advantage. It is also worth to remember that this is the Spaniard’s rookie season in the premier class, and with his injuries early on in the season, it could take a little longer before the young KTM rider can push with the intensity required throughout the entire race. Though anything can happen, and it could be sooner rather than later that we see him back on the MXGP podium.

Team HRC’s Tim Gajser has shown that he is really fighting hard to stay in contention of the title this season. He finished 8-5 in the races during the MXGP of Italy, so this time around will be looking to pick up some more championship points and keep close with Cairoli and Herlings in the championship. With it being difficult to pass around the tight Italian circuit, a good start is key and will be exactly what the HRC needs to get out in front.

His team-mate Mitch Evans will also be looking to carry on with his momentum, having finished the races yesterday in 9th and 7th positions, after some strong battles inside the top 10. This is the Australian’s fourth GP back from injury but is already looking promising as he edges closer to the top 5.

Italian rider Alessandro Lupino of Gebben Van Venrooy Racing will be looking to improve his results after finishing 14th overall, though having got the feel for the circuit, and with a better result in race two, it is likely that we will see him battle in the top 10 once again, as he aims for success at his home GP.

Previous round winner, Maxime Renaux of SM Action M.C Migliori Yamaha J1 Racing will be pushing to add more podiums to his run here in Faenza, following a career first GP victory yesterday. The Frenchman took well to the track, having shown awesome speed as well as strong mentality as he successfully defended the lead during the intense MX2 race two.

With a second-place finish and a win in race two, it is clear that Renaux was really enjoying the track and now as we continue with round seven at the same circuit, the confidence he built up yesterday will be an advantage.

Though Red Bull KTM Factory Racing rider Tom Vialle will be looking to respond and finally take a win here in Faenza, after a mistake in race one yesterday which cost him the victory. Though he showed that he is capable of making a good recovery and push hard, as he really applied the pressure to Renaux in the second race, but perhaps ran out of time to make a move.

As three points separate 1st and 2nd in the championship, Monster Energy Yamaha Factory Racing’s Jago Geerts will be keen to win more races this time around. Having rode strong in both MX2 races yesterday, he took the win in the opening heat, while in the second, after pushing hard for the majority of the race, made the wise decision to play it safe and take a 3rd place finish.

Having proven that he has the speed and good starts, all Geerts needs to do is stay out in front and avoid any trouble – though it’s not always that simple.

Mathys Boisrame of F&H Kawasaki Racing had another positive day during the MXGP of Italy, finishing 3-4 in the races, just two points shy of another podium. Boisrame has always been predominantly stronger in the hard pack, all going back to his French roots, and his riding yesterday proved that he is a threat for race wins once again.

Back on the rise are the Rockstar Energy Husqvarna Factory Racing duo Jed Beaton and Thomas Kjer Olsen. After some bad luck in Latvia, it seems that the two factory Husqvarna riders have made a good recovery as they battled within the top 10 to finish 5th and 6th overall yesterday. Now with another GP ahead, it would be great to see them challenge the leaders for even higher positions.

Another rider to look out for this time around could be the Hitachi KTM fuelled by Milwaukee rider Conrad Mewse who had some great battles in the opening MX2 race. Mewse was locked in a battle with Boisrame for 3rd/4th places for the majority of the race, not letting the Frenchman relax at any point. The second race was a lot tougher for the Brit who only managed a 17th place finish, though having verified that he can run easily in the top 5, it will be interesting to see if he can put together a more consistent and get a solid overall result.

Italian riders Mattia Guadagnini of Husqvarna Junior Racing Maddii and Morgan Lesiardo from steelsdrjack finished the first Italian GP in 10th and 11th becoming the highest placing MX2 Italian riders in the class. Following an unlucky start to the opening race, Guadagnini was able to make a decent recovery to 15th place, while finishing in a much better 8th place in the second heat. Meanwhile Lesiardo finished the races 10-13 yesterday, so it will be good to see if the two Italian’s can improve upon their results and place inside the top 10 once again.