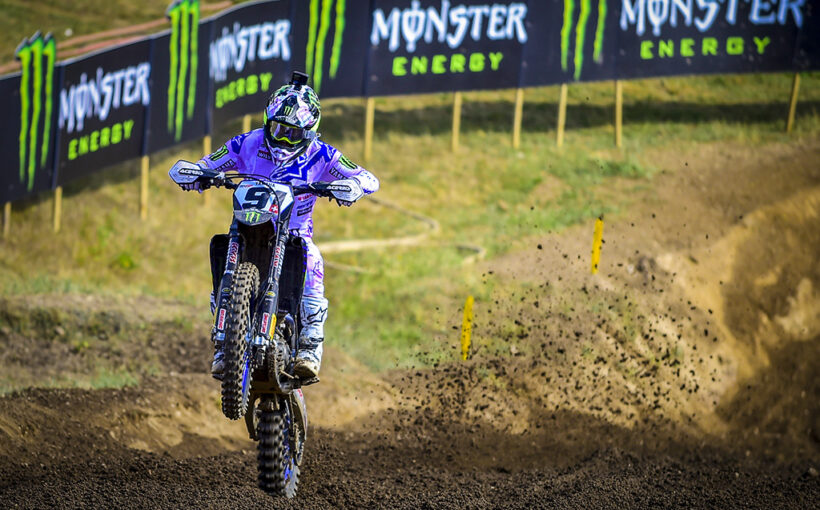 The qualifying sessions, along with action from the EMX65, EMX85, EMX2T and MXE concluded the first day of racing in Loket as excitement begins to build for the main racing tomorrow, along with the title crowning of the European classes.

In the first few laps, Gajser was able to find his way past Coldenhoff and then Guadagnini, as he began to set his sights on the leaders. Prado was pushing Seewer, who made a couple of mistakes as he tried different lines.

Kawasaki Racing Team MXGP’s Romain Febvre had a tough qualifying race, as he started in 14th and only managed one position by the chequered flag.

Gajser then closed right in on Prado, though it took the Slovenian around three or four laps to squeeze by the Spaniard and move into second.

Standing Construct Husqvarna Factory Racing’s Pauls Jonass was looking fast, as he set the fastest lap of the race from seventh position as he chased down Monster Energy Yamaha Factory Racing’s Maxime Renaux who made his return to racing.

Renaux passed Guadagnini for fifth on lap eight, with the Italian losing another spot to Jonass by the following lap, which allowed the Latvian to stick with Renaux. Jonass was able to pass Renaux for fifth on the final lap.

In the final few laps, we watched Gajser apply the pressure onto Seewer who had a few sketchy moments. Though managed to keep it on two wheels to bring it home and secure his first qualifying race win of the season. Gajser was forced to settle for second ahead of Coldenhoff, Jonass and Renaux.

Jeremy Seewer: “It’s my first pole position of this year. So, I’m happy about that. I didn’t came here thinking I’m able to do that because the week was horrible, but yeah, it’s good to start on pole. I mean, tomorrow’s a new day, it’s just the qualifying race so I used this to try different lines and some things. Like you said, I had a few little moments trying different things because Tim was behind me, but I’m happy to get away with the win”.

“Yeah, that would be cool. I know I’m in shape and ready to do all of that. It just takes a good start in both races and stuff. I’m confident and you know, I won’t put too much pressure because on this track, you need to stay relaxed to be fast. It’s slippery, sketchy, so I’m definitely going to plan on winning a bit more in the future”.

Vialle then crashed on the opening lap, as did Geerts with the duo picking themselves quickly to stay within the top 10.

Gianluca Facchetti of KTM Beddini MX2 started well and was among the leaders before he dropped back to ninth and later finished the race in 20th. It was the Italian’s first race since Argentina.

Geerts then passed Kay de Wolf of Nestaan Husqvarna Factory Racing for fifth as he made his way back up the order. The Belgian then set his sights on Vialle who was ahead of him and looking to make a move on Adamo.

While Vialle was focused on Adamo for second, Geert was able to make the most of this opportunity and caught the Frenchman off-guard as he stole third. At this point Benistant was more than nine seconds ahead of the field and looking comfortable for the win.

In the end, Benistant secured his second qualifying race win of the season. He won ahead of Adamo, Geerts, Vialle and Red Bull GasGas Factory Racing’s Simon Längenfelder.

Thibault Benistant: “It’s my second win of this season. I feel good on the bike and I’m enjoying the riding and when I have this feeling I can be quite fast. For sure, tomorrow I’m looking forward to take a good start for some good races”.