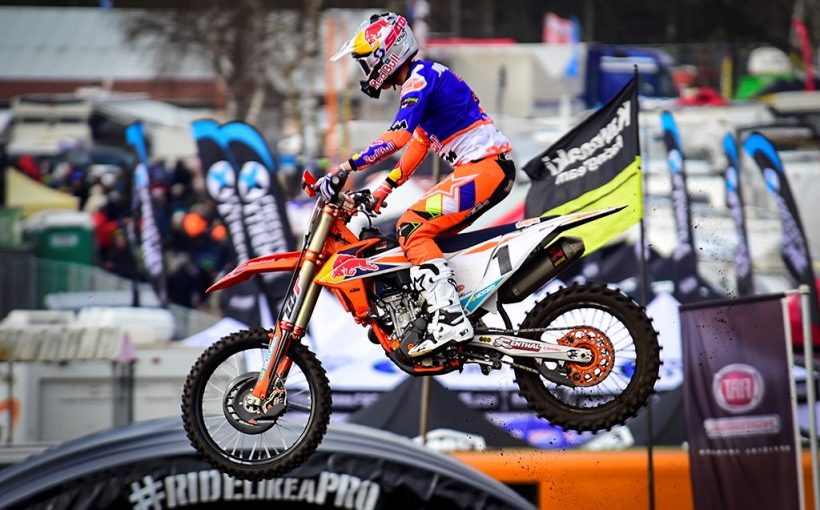 HERLINGS AND JONASS PERFECT IN VALKENSWAARD.

The 2018 MXGP of Europe at the famous Eurocircuit in Valkenswaard has finished in epic fashion. The dark Dutch sand was as unforgiving as it was testing for the top MXGP and MX2 riders in the world. While the conditions were vastly different from the season opener in Patagonia Argentina the result was much the same with Red Bull KTM Factory Racing’s Jeffrey Herlings and Pauls Jonass taking the overall wins and maintaining their Red Plates.

After a quick pass on Coldenhoff, Herlings switched his focus over to the Belgian, Jeremy Van Horebeek. As Herlings chased Van Horebeek, Team HRC’s Tim Gajser was passed for 5th by the other Monster Energy Yamaha Factory MXGP bike of Romain Febvre.

Gajser then threw away his goggles and soon after came under pressure from the pair of Rockstar Energy Husqvarna Factory Racing riders, Max Anstie and Gautier Paulin. Just after Anstie and Paulin made their way past Gajser, Jeffrey Herlings moved into the second spot.

Cairoli then started to lose time to Herlings as Anstie and Paulin passed Febvre. As Jeffrey inched closer to Cairoli the Italian lost balance in a rut and went down. From there Herlings took the lead and never looked back as Cairoli took second and Van Horebeek third.

Herlings then started his charge to catch the distant Cairoli. Cairoli’s lead was near 13 seconds but dropped lap after lap, at one point Herlings gained 4 seconds in a single lap. As Herlings came closer Cairoli sensed the #84 looking back on several occasions. When the time finally came Herlings made the pass look easy as he out braked Cairoli into the turn just after the finish line. Cairoli tried to retaliate but would cross the checkered flag 3.8 seconds after Herlings.

Team HRC’s Tim Gajser’s return to MXGP was a challenging one as he crashed twice in race 2, even so he managed to finish 9th overall.

Red Bull KTM Factory Racing’s Jeffrey Herlings in the press conference said: “We can back strong and we managed to win both races today. It is a little bit of a shame from yesterday that we didn’t have such a good start position but it’s ok. I’m looking forward to Red Sand next weekend, I have been there a lot during the winter so I kind of know the track!”

Red Bull KTM Factory Racing’s Antonio Cairoli in the race press conference stated: “The weekend was good, we knew that at this race we would struggle a little bit because it has been a long time since I’ve trained in Belgium or Holland. Jeffrey was very fast and we knew that on this track he would be, but we managed to finish on the podium and a second place is good for the championship.”

Finishing on the podium was Gautier Paulin who also took third overall after tying with Coldenhoff in points while Febvre scored his 2nd top 5 of the season.

Rockstar Energy Husqvarna Factory Racing’s Gautier Paulin in the press conference admitted: “We managed to have a good setup on the bike and I was really happy with the bike and I put myself in the right position. That’s the first podium of the season, we are working hard but the speed wasn’t there today so we need to continue because I want to battle with those guys.”

Red Bull KTM Factory Racing’s Pauls Jonass is showing everyone exactly why he was MX2 World Champion in 2017. Jonass admitted that he wasn’t riding or feeling his best but nevertheless the #1 took double race wins today.

Race 1 started with the Red Bull KTM Factory Racing bikes of Pauls Jonass and Jorge Prado at the front with a Fox Holeshot from Jonass. Behind the KTM’s was another Austrian made bike, the Rockstar Energy Husqvarna Factory Racing #19 of Thomas Kjer Olsen.

The local MX2 rider from the LRT KTM team, Davy Pootjes was followed by Honda 114 Motorsport’s Hunter Lawrence. Later when Lawrence tried to pass Pootjes on the outside he instead had the door closed and clipped the back of the KTM sending him to the dirt. Pootjes later dropped to 8th while Lawrence got back up to 6th just behind Hitachi KTM UK’s Conrad Mewse. Meanwhile Jonass took the win followed by Prado, Olsen, and Geerts.

Race 2 started just as did race one with a FOX Holeshot from Jonass just ahead of Prado and a Husqvarna. However this time the Husqvarna in 3rd belonged to the STC Racing Husqvarna rider Henry Jacobi. Jacobi ran in third for 8 laps before crashing and then pulling of the track.

Assuming third was again Olsen as Jorge Prado was doing everything he could to catch his teammate Jonass. Prado would gain time on Jonass one lap and the Jonass would reply with his own gains the next.

At the finish Jonass crossed the line only 0.38 seconds ahead of Prado while Olsen was another 37 seconds back in third.

Red Bull KTM Factory Racing’s Pauls Jonass in the press conference said: “It is nice to go 1-1 again, today both races went perfect, I got 2 FOX Holeshots and led every single lap which is pretty nice.”

Red Bull KTM Factory Racing’s Jorge Prado in the press conference stated: “I felt great the whole weekend since free practice so it was fun to ride. I was riding good but I just could pass him (Jonass), we were pushing hard the whole race but I’m pretty happy with the first podium.”

Rockstar Energy Husqvarna Factory Racing’s Thomas Kjer Olsen in the race press conference: “I’m happy to be on the podium for the second week in a row. I am really satisfied with my riding and fitness right now.”