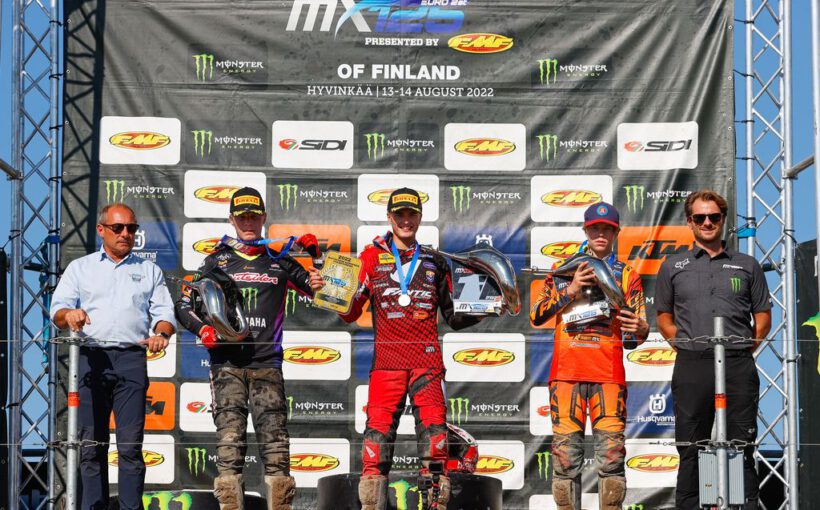 Finland made a memorable comeback to the World and European Championship racing calendar this weekend, with title celebrations from Fantic Factory Team Maddii’s Cas Valk who after the first race was crowned the EMX125 Presented by FMF Racing Champion.

Yamaha Europe EMX125 MJC’s Ivano Van Erp was the overall winner of the class, after a perfect 1-1 scorecard, which was also repeated by Lucas Coenen of Jumbo Husqvarna BT Racing in the EMX250 class, while in EMX Open the overall winner was Estonian Gert Krestinov.

In the opening EMX125 Presented by FMF Racing class, it was Yamaha Europe EMX125 MJC’s Ivano Van Erp who got himself quickly into the lead ahead of Maximilian Werner of Diga Procross KTM Racing Team. While Fantic Factory Team Maddii’s Cas Valk started in seventh.

Karlis Alberts Reisulis of Yamaha Europe EMX125 MJC started down in around eighth, while his brother Janis Martins Reisulis was 12th. K. Reisulis had a very strong lap and quickly found himself in third before getting around Werner to move into second by the second lap.

Alm dropped to seventh as Valk climbed his way into fourth and was looking to take third from Werner. He managed to do that just a couple of laps later.

Meanwhile, Van Erp was already more than seven seconds ahead of K. Reisulis who also had a steady seven second gap to Valk in third. J. Reisulis was also making good progress as he took away fourth from Werner on the sixth lap.

In the end, Van Erp took the victory ahead of K. Reisulis and Valk, with Valk celebrating his title victory as he crossed the line! At the beginning of the race, Alexis Fueri of Fantic Factory Team Maddii was his closest rival in terms of the championship but only finished 9th.

In race two it was Werner with the holeshot ahead of Van Erp, Hindersson and Maximilian Ernecker of F4E GasGas Racing Team. Lotte Van Drunen started in fifth ahead of Valk who was seventh.

K. Reisulis started in 13th while his brother J. Reisulis was 15th on the opening lap.

By lap two, Van Erp was in the lead, as K. Reisulis worked his way into fourth after a couple of very strong laps! Valk was in second at the time, as Werner dropped a position.

Further down the order, Julius Mikula got by Ernecker for fifth, while moments later the Austrian dropped to seventh after being passed by J. Reisulis, who was looking to pick up vital championship points!

Fueri then crashed out of ninth, which handed more points to the Reisulis’ brothers who were closing in on him in the championship standings.

Van Erp though was no match for anyone this weekend as he secured his first double race win victory ahead of Valk, K. Reisulis, Mikula and Werner.

A 1-1 result put Van Erp on the top step ahead of Valk and K. Reisulis. Though it was Valk who was awarded the gold plate and medal and was officially declared the 2021 EMX125 Presented by FMF Racing Champion! K. Reisulis finished second in the standings with 314 points, just 13 points ahead of his younger brother J. Reisulis.

Cas Valk: “I pushed hard all season, tried to avoid any big mistakes. I took good points in every race. For sure I was pushing hard in that final race to get the win but came up a little short. But overall, I am super happy and big thanks to my team for all of this, I wouldn’t have been able to do it! I will enjoy this moment”

In the first EMX250 race, Fantic Factory Team Maddii’s Haakon Osterhagen continued to assert himself as a holeshot king in the category after getting off to another strong start, leading the likes of Lucas Coenen of Jumbo Husqvarna BT Racing and Mike Gwerder of WZ Racing Team. Gwerder then tagged L. Coenen on the opening lap which saw him crash out of third.

9MM Energy BUD Racing Kawasaki’s Quentin-Marc Prugnieres was one of the riders who got unlucky at the start and crashed. The Frenchman got going eventually and finished the race in 26th.

By the end of the opening lap, series leader Rick Elzinga of Hutten Metaal Yamaha Racing was already third, while L. Coenen took the lead from Osterhagen. The Belgian then clocked the fastest lap of the race to extend his lead.

On lap two, L. Coenen lost the lead as he dropped back to fourth, which meant that Osterhagen was back in first place. Elzinga was promoted to second as TBS Conversion’s Camden McLellan was right there in third, looking to get around the Yamaha rider.

L. Coenen was pushing hard and was keen on making up for his earlier mistake as he got onto the rear wheels of McLellan and Elzinga. He managed to pass Elzinga during lap six, while it took him a few more laps to get around McLellan, but he did eventually on lap 11 as he went straight into the lead. Osterhagen dropped to third.

In race two, the holeshot went to L. Coenen who was keen on getting out in front early on ahead of Hutten Metaal Yamaha Racing’s Andrea Bonacorsi, Team VRT KTM Veritise’s David Braceras, Gwerder, Osterhagen and Toendel, while Elzinga started in 10th.

Elzinga found himself quickly in sixth, while Tondel began to push Braceras for third and eventually managed to take away the position from the Spaniard.

Osterhagen climbed into fourth but was coming under pressure from Prugnieres who was keen on taking away the position from the Norwegian. By lap seven he was able to do just that.

As the race went on, Osterhagen then got caught by McLellan who was trying everything to get around the Fantic rider for fourth. After several attempts he managed to make the pass stick four laps from the end.

L. Coenen was fully in control from start to finish and ended up winning the race an impressive 21.885 seconds ahead of Bonacorsi and Toendel.

There was no doubt about who the winner was as Coenen stood on the top step proudly after winning both races ahead of McLellan who secured his second podium finish on the bounce and Bonacorsi who was third.

Lucas Coenen: “It was a perfect weekend. First place in both races. The track was rough in the second race, but I kept my rhythm, made a big gap and controlled my race. Whereas first race was more difficult because I made a small crash, but I came back to win. Two wins, we will see what happens in St Jean”.

In the first EMX Open of the weekend, the holeshot went to the championship leader Jose Butron of JD Gunnex KTM Racing who got comfortable in first position from the get-go. Second was Michael Ivanov ahead of Pekka Nissinen, Domantas Jazdauskas and Tomas Kohut of Osicka MX Team.

Michael Sandner of Raths Motorsports started in around sixth place and was looking to close the gap down to Kohut but a small mistake saw him drop back to ninth. Gert Krestinov was 10th at that point and was keen to move up the order.

Jazdauskas was second by the second lap but ended up crashing and did not carry on with the rest of the heat.

Butron opened up a steady 10-second gap fairly quickly as Krestinov made progress after getting around Sander and then Juuso Matikainen for fifth. The Estonian then got around John Adamson a few laps later and then Kohut to eventually make his way up to second position by the eighth lap.

By that point, Butron was too far in front for Krestinov to be able to do anything about it and in the end, the Spaniard won the race and extended his championship lead while Krestinov was second ahead of Matikainen, Kohut and Andero Lusbo who worked his way into fifth on the final lap after Erki Kahro dropped two positions.

In race two, it was home hero Matikainen with the holeshot ahead of Krestinov, Butron and Sandner. Kohut started in around sixth place.

Matikainen was looking solid in the lead ahead of Krestinov, with Butron keeping an eye on both in third. Krestinov was able to close the gap after setting the fastest lap of the race. The Estonian was eventually able to get the job done in lap three to take control of the race.

At the same time, Butron was passed by Kohut as Sandner crashed out of sixth. The Spaniard had another mistake a couple of laps later that saw him crash but he managed to get going quickly and stay ahead of John Adamson who was applying the pressure.

In the final few laps, Kohut put in the work to get by Matikainen to second place from the Finnish rider and also solidify his spot on the podium! Krestinov won the race ahead of Kohut, Matikainen, Butron and Adamson.

A 2-1 result gave Krestinov his first overall win in the EMX Open class ahead of Butron who was forced to settle for second ahead of Kohut who joined the pair in third.

The next round of the EMX Open class will take place in Turkey where the title will be decided. Butron heads into the final round of the series with a 26-point lead over Kohut.

Gert Krestinov: “The weekend was really good. It’s a short trip for us to come over. I like the sand tracks which makes it easier. First race, I had a bad start and came through to second. Second race, I got a good start, made a pass and took the lead and made a gap. Thanks to everyone that helped me to get here”.