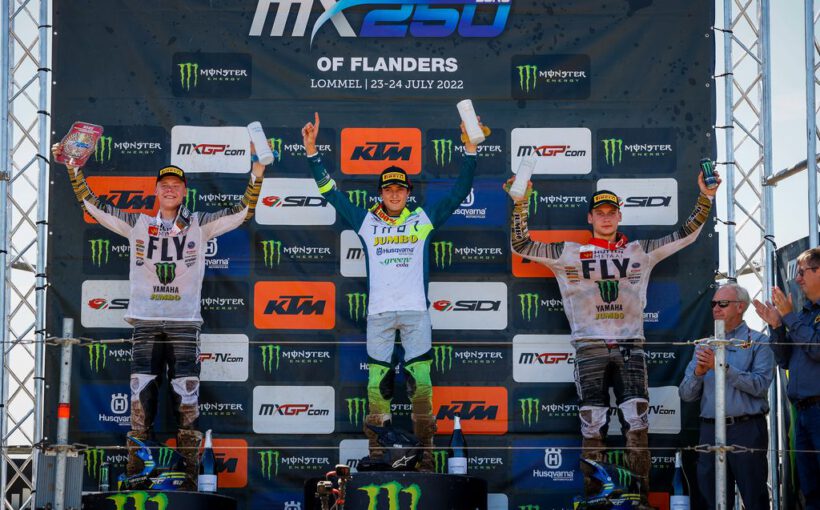 L. Coenen and J. Reisulis Master the Sand at the round of Flanders.

Round seven of the EMX250 and EMX125 Presented by FMF Racing Championships have concluded at the round of Flanders that saw Jumbo Husqvarna BT Racing Team’s Luca Coenen and Janis Martins Reisulis victorious in the deep and sandy conditions of Lommel!

Hutten Metaal Yamaha Racing’s Rick Elzinga and Cas Valk of Fantic Factory Team Maddii remain as the series leaders and have a comfortable gap to their closest rivals.

In the first EMX250 race, it was Sacha Coenen of Jumbo Husqvarna BT Racing who took the holeshot from Hutten Metaal Yamaha Racing’s Rick Elzinga and Andrea Bonacorsi.

Elzinga made a quick move into the lead, as Bonacorsi followed through and moved into second as S. Coenen got pushed down to third. Guillem Farres of Raths Motorsports fought his way up the order as he eventually passed Dave Kooiker of Hutten Metaal Yamaha Racing for third.

By the fourth lap, Farres also managed to get ahead of Bonacorsi, though the Italian fought back immediately to take back his position. Farres then crashed and did not carry on with the race.

Meanwhile Lucas Coenen of Jumbo Husqvarna BT Racing caught both Elzinga and Bonacorsi by surprise as he made his way from seventh and into the lead on lap nine. The trio battled closely for the next several laps as Bonacorsi got by his teammate to move into second.

Bonacorsi pushed L. Coenen until the final moments of the race, as the pair crossed the line separated by just 0.549 seconds as L. Coenen took the race win in front of his home crowd. Bonacorsi was second ahead of Elzinga, Quentin Marc Prugnieres of 9MM Energy Drink BUD Racing and S. Coenen.

In race two, it was once again S. Coenen who was the leading rider into the first corner, though it took no time at all for his brother L. Coenen to take over first position. Elzinga was right there ahead of Farres and Maxime Grau of Nestaan Husqvarna Factory Racing.

A couple of riders went down in the first corner too, as Bonacorsi started down in 13th.

S. Coenen then dropped to fifth as Farres and Prugnieres went by. Meanwhile Bonacorsi was making good progress as he fought back to seventh, though as the Italian made the pass, he crashed moments later and had to do the work all over again.

By that point, L. Coenen had a very impressive 18.925 second lead over Elzinga as S. Coenen struggled with what looked like a bike issue and did not carry in with the rest of the heat.

Out of nowhere, Bonacorsi found a second gear as he began his pursuit for the podium after making some quick passes. The Italian went from 14th to eighth, then passed Kooiker and Cornelius Toendel of Fantic Factory Team Maddii and eventually Camden Mc Lellan of TBS Conversions Racing Team on the final two laps to secure fourth.

But no rider was a match for the home hero L. Coenen who win the second heat with a 37.187 second advantage over Farres, Elzinga, Bonacorsi and Mc Lellan.

A 1-1 result put L. Coenen on the top step of the box in front of his home fans, while Elzinga finished second and Bonacorsi third. As it stands, Elzinga continues to lead the EMX250 Championship standings, 30 points over Toendel and L. Coenen who is third.

Lucas Coenen: “It was a perfect weekend! Second race, I quickly passed Rick and my brother because I knew they were fast and then I made a big gap and controlled my race. I am so happy. I want to thank all the fans; they were really amazing. 1-1 and now we keep going and see how the next race goes”.

In EMX125 Presented by FMF Racing heat one, it was Julius Mikula who took the holeshot ahead of Nicolai Skovbjerg, Mads Fredsoe, Maximilian Werner of DIGA Procross KTM Racing and Janis Martins Reisulis! J.M Reisulis then found his way into third, while his brother, Karlis Alberts Reisulis of Yamaha Europe EMX125 MJC fought through the field in the first lap to move up to fourth.

J.M Reisulis then got himself up to second, as Yamaha Europe EMX125 MJC’s Ivano van Erp fought his way through the field, after a mid-pack start to move into sixth. Van Erp was on a charge as he quickly pushed inside the top five and was looking to close in on K.Reisulis.

Mikula was the leading rider from the get-go but was coming under pressure from J.M Reisulis, who was riding well under pressure.

Further down the field, series leader Cas Valk of Fantic Factory Team Maddii had a tough beginning to his race as he started down in 20th. After making some nice passes, Valk got caught up with another rider who crashed in front of him, but was able to get going again and made some really good progress to end the race in sixth position.

K. Reisulis and Van Erp then battled closely, as the Dutchman made the pass for third as Mikula stretched his lead to over six seconds. Van Erp then crashed, as did the leader Mikula, but was able to get going quickly and stay ahead of J.M Reisulis.

In the final few laps it was an all-out battle between Mikula and J.M Reisulis for the win but the rider from Czech Republic was able to keep calm and secure his first EMX race victory ahead of J.M Reisulis, Van Erp, K. Reisulis and Skovbjerg.

In race two, the holeshot went to Fredsoe, though J.M Reisulis wasted no time to make the pass and get himself into the lead. Laban Alm got by too, as Lotte Van Drunen got off to a very strong start in sixth. Mikula was right there in the mix too as he got up to second place, while Valk was down in fifth as Van Erp struggled in 28th.

On the opening lap, Mikula fell out of second, as Valk made some fast passes to get by Alm for second. Mikula was looking to recover down in the top 10, as K. Reisulis passed Alm also after making up two positions in a matter of a couple of corners.

By that point J.M Reisulis was around three seconds in the lead as Valk worked hard to close down that gap after setting the fastest lap of the race.

Meanwhile Van Drunen had Mikula applying the pressure, though held him off for a while as she showed her strength in the sandy conditions. Van Drunen continued with her impressive performance and ended up finishing 10th.

As Mikula worked his way back up to fourth, J.M Reisulis made a mistake which allowed Valk to get within touching distance of the leader. The two fought intensely for the win, though Valk was able to find his way through on lap 11, but his time in the lead was short as he threw it away moments later.

Valk crashed which allowed J.M Reisulis back in the lead, though the Dutchman got going quickly and held on to second.

Despite missing out on a top three overall finish, Valk leads the championship standings with 289 points over K. Reisulis who moves up to second on 254 points while Alexis Fueri of Fantic Factory Team Maddii drops to third after a tough weekend in the sand.

Janis Martins Reisulis: “I can’t describe the feeling right now. Finally, a first place. The starts made it easier and I’m really happy to get the overall win at this track. I had pressure from behind in the races, but I’m happy about the victory”.