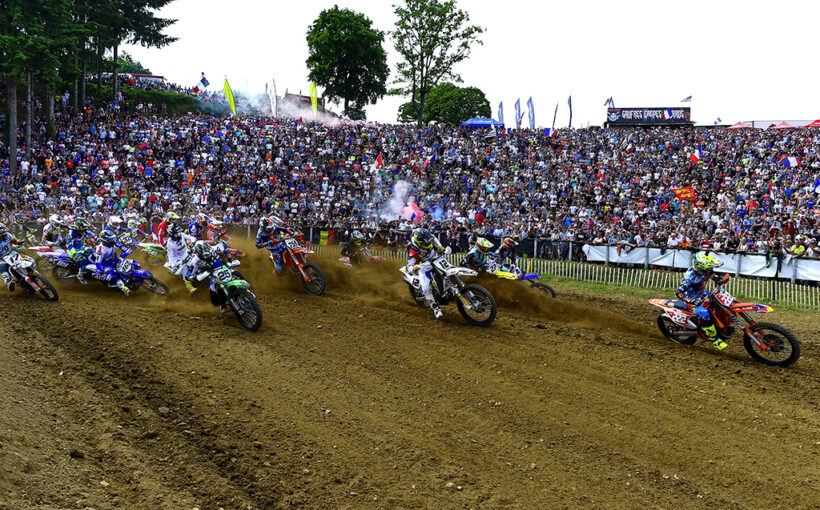 Next on the FIM Motocross World Championship calendar is an old favourite among the paddock, as this weekend Ernèe is set to host this year’s Monster Energy MXGP of France.

It has been a while since MXGP visited the legendary venue, in fact the last time a Grand Prix race took place in Ernèe was back in 2017 which featured Clement Desalle, Antonio Cairoli and Gautier Paulin on the premiere class podium.

Over the course of the last three decades, Ernèe has hosted MXGP numerous times, the first being in 1990 when American Donny Schmit won the 125cc GP on his Suzuki.

This year big things can be expected from the French Grand Prix, as the ‘Circuit Raymond DEMY’ has always provided some of the biggest races in motocross history, take for example the epic 2015 Monster Energy FIM Motocross of Nations that saw Team France top the podium in front of tens of thousands of passionate French fans who proudly sang the ‘La Marseillaise’, along with the legendary 2003 Grand Prix that saw the ten-time World Champion Stefan Everts become the first ever rider to win the triple crown (winning three classes on the same day).

Alongside the regular MXGP and MX2 action, we will also see rounds of the EMX125 Presented by FMF Racing and EMX250 which are currently led by Fantic Factory Team Maddii’s Cas Valk and Cornelius Toendel.

There is no doubt that all eyes will be on last weekend’s Grand Prix winner Maxime Renaux of Monster Energy Yamaha Factory Racing who is heading into his home race as the favourite to win. Securing his first ever overall victory in the MXGP class is no doubt going to be a big confidence and motivation boost for the Frenchman to put on his best performance in front of his home fans.

In addition, he is also in the title fight with Team HRC’s Tim Gajser who is 66 points ahead of Renaux. Gajser has struggled in the last two GP’s and has failed to make it onto the podium on both occasions. The French GP will be an opportunity for the Slovenian to get back to winning ways that he showed in the first half of this season and put his illness behind him. For Gajser, it will be the first time that he will race in Ernée since the Monster Energy FIM MXoN in 2015 when he won the B final, as in 2017 he was injured and did not line-up for the Sunday races.

Also needing to make up some valuable points and looking to get back on the box will be Red Bull GasGas Factory Racing’s Jorge Prado who missed out on the top three at the Spanish Grand Prix. Prado was looking strong in both races, running at the sharp end before a couple of mistakes and a crash in race two took him out of the running for the overall victory. Prado remains fourth in the standings but we’re still at the halfway stage and there is still time for the Spaniard to claw back some points and get back in the title fight.

Monster Energy Yamaha Factory Racing’s Glenn Coldenhoff and Standing Construct Husqvarna Factory Racing’s Brian Bogers had a good weekend in Spain as they finished second and third on the podium. Both riders now have two podiums each this season and hopefully they can continue in this direction this weekend and deliver another solid result. Colenhoff was also the qualifying race winner, making it his second this season (Portugal and Spain) and he is clearly showing that he is strong also on the hard-pack tracks.

Looking back at the previous results in 2017, Standing Construct Husqvarna Factory Racing’s Pauls Jonass and Monster Energy Yamaha Factory Racing’s Jeremy Seewer were on the box back when they were fighting for the MX2 title. Jonass won the GP, while Seewer finished third, with Benoit Paturel of Team Ship to Cycle Honda SR Motoblouz separating the pair as he finished second on the podium. Jonass and Seewer have some podiums under their belt this season already and this could be another opportunity for them to get back on the box. Meanwhile, for Paturel this will also be a weekend to deliver strong result!

Other names to look out for this weekend include JT911 KTM Racing’s Jordi Tixier, Riley Racing’s Christophe Charlier and Pierre Moine who will all look to put on their best performance at their home round.

In MX2, the favourite will no doubt be Red Bull KTM Factory Racing’s Tom Vialle who was victorious last weekend with the perfect 1-1 score card. Vialle also won the French GP last season in Lacapelle Marival, so pressure will be on the Frenchman to deliver his home fans the top step of the podium.

Vialle also enters the 10th round of the series with the red plate and a 10-point advantage over Monster Energy Yamaha Factory Racing’s Jago Geerts who had a couple of big crashes, which made for a difficult weekend in Arroyomolinos last week. Though Geerts is known to bounce back when he needs to, so of course we can expect him to be a serious threat for the win this time around.

Team Ship to Cycle Honda SR Motoblouz’s Stephen Rubini is a rider to look out for this weekend, as the Frenchman has a real shot of finishing on the box at his home GP. Rubini already has a podium under his belt which he achieved in Maggiora and was close again last weekend in Spain after an impressive third in race one. There is no doubt that Rubini is strong in hard-pack conditions, so Ernèe should be a track suited to him and it will be interesting to see what he can deliver this weekend.

Another favourite for the podium this weekend is Red Bull GasGas Factory Racing’s Simon Längenfelder who finally got back on the box in Spain with a consistent 2-3 result in the races. It was his first podium since his mega performance in Matterley Basin where he won the qualifying and both races, so should give him a confidence boost heading into the weekend and hopefully we will see more of the German at the sharp end.

Diga Procross KTM Racing’s Liam Everts turned some heads at the Spanish Grand Prix as he delivered two very solid results to finish fourth overall and just one point shy of the podium. Everts has been building his confidence this season, during what is his rookie year in the MX2 class. It’s been nice to see him build-up his results and hopefully a podium will soon be coming for the young rider.

F&H Kawasaki Racing’s Kevin Horgmo and Big Van World MTX Kawasaki’s Mikkel Haarup both showed promise in Spain, but some mistakes and crashes proved to be costly for a top overall score. Both riders can be expected to be fast this weekend and it will be interesting to see whether they can challenge Vialle and Geerts who are currently the front-runners of the field.

Of course, Monster Energy Yamaha Factory Racing’s Thibault Benistant will be looking for top scores at his home round and will be fighting for a chance to stand on the box again, as will Pierre Goupillon and Tom Guyon of Team VRT KTM Veritise who will once again line-up for the MX2 races this weekend.