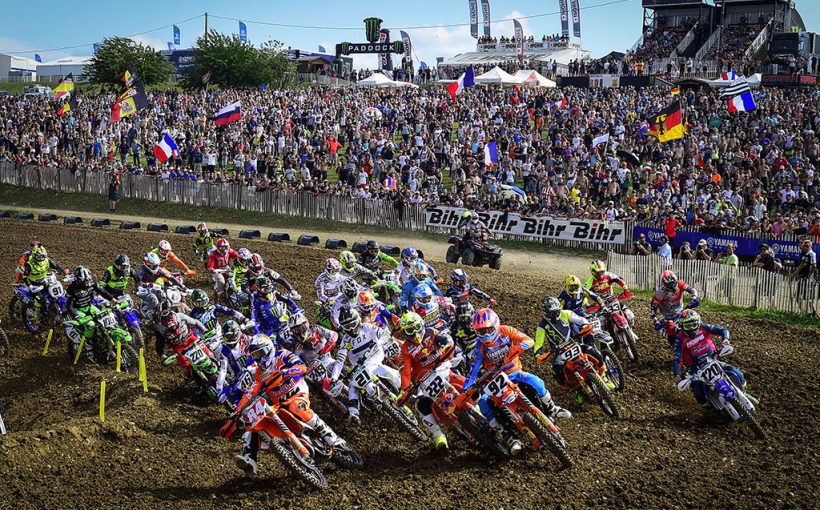 As the third round in a three week-three GP stretch MXGP returns to Saint Jean d’Angely this weekend to host the MXGP of France for the 2nd consecutive year. The French GP is sure to impress with its amazing atmosphere as the nation hosts some of the most enthusiastic motocross fans in the world.

On the West of France, the circuit of Saint Jean d’Angely is one of the best venues on the calendar for spectating with a beautiful hillside layout and this weekend will host not only the FIM MXGP and MX2 World Championships but also the European Championship classes of EMX250 and EMX125 presented by FMF Racing.

In EMX250 it is Team Maddii Racing Husqvarna’s Alberto Forato dominating the class so far with 4 race wins and two overall victories from the first two rounds in Great Britain and Trentino. This week we may see the two French riders, Stephen Rubini and Pierre Goupillon both from Honda Redmoto Assomotor, and 2ndand 3rdin the points step up in front of their home crowd.

EMX125 presented by FMF Racing returns for its 4th round of 2019 and just as in EMX250 the 125 championship is led by a Team Maddii Racing Husqvarna rider, the young Mattia Guadagnini. Guadagnini just like his EMX250 teammate has dominated his category so far this year with 5 of 6 race wins. Over 90 others have entered into this weekend’s competition though and whether it’s a French rider like Team VRT’s Tom Guyon or one of the other young rippers Guadagnini well surely have his hands full.

The 2019 MXGP action continues to bring surprises, only one week after a difficult 6th overall in Lombardia, Italy, Team HRC’s Tim Gajser rode to a perfect 1-1 finish in Portugal just days ago. Gajser’s French resume puts him with 2 podium finishes, a 3rd in 2018 and a 2nd in 2016.

Meanwhile Red Bull KTM Factory Racing’s Antonio Cairoli made the best of costly mistakes to take 2nd and maintain his championship points lead but it was Monster Energy Wilvo Yamaha Official MXGP’s Arnaud Tonus making his long-awaited return to the podium. Cairoli has reached the podium 6 times of his 9 visits to Saint Jean d’Angely including 2 overall wins and has never missed the top 10. Tonus on the other hand hasn’t raced in Saint Jean d’Angely since 2014 when he took 2nd.

Monster Energy Wilvo Yamaha official MXGP team’s Gautier Paulin currently holds third in the points but will be looking for his best result of the year this weekend for his home GP. Paulin has been on the French podium in Saint Jean d’Angely twice, once in 2012 on the 450 and once the year before in the MX2 category but last year only came away with a 7th.

Fellow Frenchman Romain Febvre from the Monster Energy Yamaha Factory MXGP team will be back in action on home soil this weekend after returning from injury just last week in Portugal. Febvre won this event in 2016 and has made the top five two other times with his worst result in 2012 still being a top ten. After showing he hasn’t lost the pace with 8th overall last weekend Febvre may be an unlikely podium contender this Sunday.

Other riders to look out for include Monster Energy Kawasaki Racing Team’s Clement Desalle and Monster Energy Yamaha Factory MXGP’s Jeremy Seewer. Desalle has a strong track record here with an overall win in 2014 in addition to 2 other podium finishes and 3 more top 5 results including 4th last year. Seewer on the other hand was in the top ten here during his rookie MXGP season last year along with his MX2 podium in 2016, not to mention both him and Desalle were fighting in top 5 positions last weekend.

Both Olsen and Prado were on the podium here last season but Prado again was the better of the pair taking the win while Olsen came away 3rd. The perfection seen by Prado’s racing performances so far this year leaves many to question how long he can maintain it and whether Olsen or someone else will end his winning streak.

F&H Kawasaki Racing Team’s Henry Jacobi is showing both speed and consistency that in seasons past was hit or miss. As the third place rider in the championship it will be interesting to watch the German this weekend seeing he has two results on record here and both leave much to be desired, 28th in 2018 and 15th in 2016.

Riding in his first ever home GP is Red Bull KTM Factory Racing’s MX2 rookie Tom Vialle who holds 5th in the standings behind Monster Energy Kemea Yamaha Official MX2’s Jago Geerts. Vialle suffered a heavy hit in Mantova two weeks ago and was 7thin Portugal last weekend but with the home crowd behind the already impressive rookie the French GP could provide him with the best result yet.

One more rider to follow this weekend is the Team Honda 114 Motorsport rookie, Mitchell Evans. Evans reached the podium for his 2nd time last week and though he is Australian he will consider this his home GP as him and his team is now based in France.