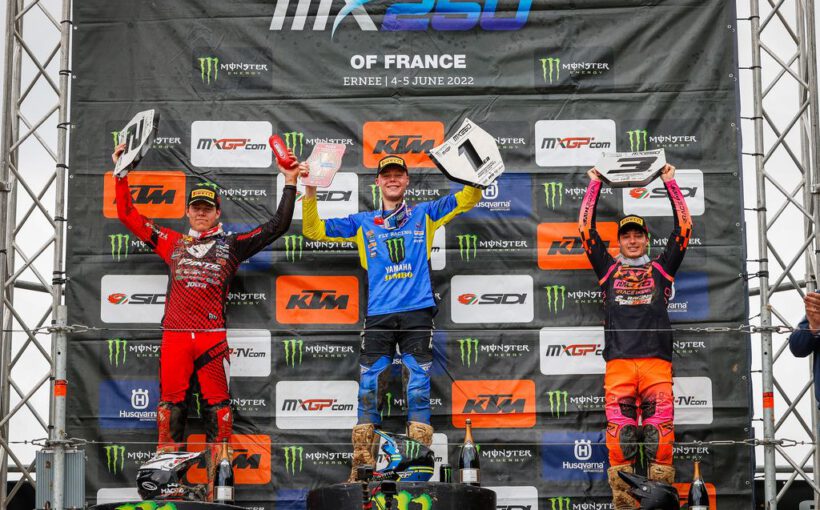 Elzinga and Valk Secure EMX Overall Victories at the French Round.

In EMX250 race one, it was Lucas Coenen of Jumbo Husqvarna BT Racing who led the way ahead of Mike Gwerder of WZ Racing Team and Fantic Factory Team Maddii’s Cornelius Toendel.

Gwerder briefly found himself in the lead, before being passed back by the Belgian, who led for three laps after that. Coenen then crashed which allowed Toendel into the driving seat after he got around Yago Martinez who was second at the time.

Meanwhile Hutten Metaal Yamaha Racing’s Rick Elzinga had to fight through the field as he started in around the top 10. At that point of the race, he was fifth behind his teammate Dave Kooiker who he passed on lap four.

Toendel looked solid in the lead, though made a slight mistake once, but with a big gap managed to hold on to first place. But he crashed once more on lap 10, which allowed Martinez to benefit and take over control of the race as the series leader dropped to ninth.

Martinez managed to bring it home and secure his first EMX250 race victory ahead of Elzinga who fought back to second, while Jorgen-Mathias Talviku of Sahkar Racing crossed the line in third. Toendel finished ninth.

Wade then crashed moments later which allowed Toendel to move up to second as he also got around L. Coenen.

Further down the order, Elzinga was once again buried among the pack and had to work his way through. Though he did this fairly swiftly as he took sixth from Maximillian Spies of Schmicker Racing, then fifth from Martinez and by the fourth lap was already ahead of Osterhagen in third.

L. Coenen was another rider to pass Osterhagen, who was looking like he was struggling, as Elzinga set the fastest lap of the race and was focusing his attention on catching the leaders.

At the halfway stage, a three-way battle for the win began between Toendel, L. Coenen and Elzinga. A couple of mistakes crept in among all three, though Toendel was able to hold on, despite immense pressure from Coenen as Elzinga lost some ground to the leaders.

In the end, it was a photo finish between Toendel and L. Coenen, as the Fantic rider crossed just 0.221 ahead of the Husqvarna rider, while Elzinga finished second, as Osterhagen held on to fourth ahead of Spies.

A second and a third-place finish gave Elzinga his third overall of the season, ahead of Toendel and Martinez who celebrated his first podium in the EMX250 category.

Heading into round six of the championship, Elzinga now holds the red plate once again, though by a very slim margin as he is just one point ahead of Toendel in the standings. Meanwhile Bonacorsi is third.

Rick Elzinga: “Finally cancelled out my poor weekend in Maggiora. Since then, I think I’ve been doing pretty well, won the first few rounds and then Maggiora was unlucky and then second in Sardegna and here the overall, so I think I’m doing pretty well. Happy with my riding, was a bit tough coming from Spain as I was a bit ill… I’m getting back into the books for school too. But of course I’m going to enjoy this moment and thanks to my crew”.

In the first EMX125 Presented by FMF Racing heat, it was Toni Giorgessi who took the holeshot ahead of Yamaha Europe EMX125 MJC’s Ivano Van Erp and Fantic Factory Team Maddii’s Alexis Fueri, as a number of riders went down in the first corner.

Van Erp briefly took over the lead, though Giorgessi responded immediately before the Dutchman was able to find his way to the front for good by the end of the opening lap. Further behind, Fantic Factory Team Maddii’s Cas Valk was making progress up to the top three and by the third lap was leading the way with Karlis Alberts Reisulis of Yamaha Europe EMX125 MJC just behind him.

Van Erp crashed, as Valk also dropped a few positions, while K. Reisulis began to come under pressure from Fueri and by the seventh lap there was a new rider in the lead. The Frenchman stretched the gap out immediately and was looking solid for the next several laps.

As the rain intensified and track conditions became more challenging mistakes began to creep in amongst the field and with two laps left to go, we saw a change for the lead once again as Valk moved into first place.

In the end, Valk crossed the line 27.086 seconds ahead of Fueri who finished second, while K. Reisulis was third ahead of Van Erp and Mathis Valin.

In the second race, it was Van Erp who led the way ahead of K. Reisulis, Tom Brunet of Team CRT KTM Veritise, Fueri, Valin and Valk.

Reisulis was not looking to waste time as he made several attempts in the first half of the race to get around Van Erp. He really had to work for it but finally on the ninth lap got around the Dutchman and took over the lead.

Giorgessi then crashed out of ninth, as Valk progressed through the field. The Fantic rider made his way up to fourth and then after setting the fastest lap of the race was all over the rear wheel of Fueri. The two teammates battled, with Fueri eventually making a mistake and crashing which allowed Valk through into third and then up to second as Van Erp crashed with four laps to go.

In the end, K. Reisulis won the race with a 2.980 second advantage over Valk, Van Erp, Fueri and Marc-Antoine Rossi of Tech 32.

A win and a second gave Valk his third overall victory of the season, as he topped the podium ahead of K. Reisulis and Fueri. As it stands, Valk extends his championship lead to 212 points, while K. Reisulis now occupies second with 180 points, just two points ahead of Fueri who drops to third.

Cas Valk: “It was a nice weekend, track was though all weekend, but I managed to do solid two races, second and first for first overall. I’m really happy and a big thanks of course to my team, without them it’s not possible. I’m really excited for next week”.