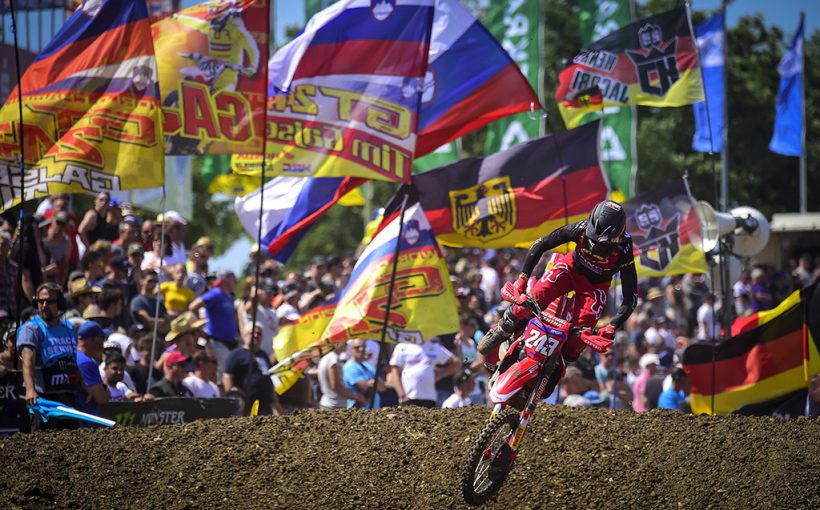 The MXGP of Germany saw some of the brightest actions from the 2019 FIM Motocross World Championship whereTeam HRC’s Tim Gajser and Red Bull KTM Factory Racing’s Jorge Prado were dominant in front of thousands of German fans who were cheering from the German hillsides.

The Talkessel circuit has been on the FIM Motocross World Championship calendar since 1971 and always provides the perfect conditions and atmosphere for a ‘one to remember’ racing weekend.

Gajser was clocking big lap times as he was five seconds ahead of Seewer on lap two, when the Slovenian crashed and suddenly Seewer was right on him. While going to pass the HRC rider the two collided and Gajser kept his lead. Gajser might have gone down, but he quickly made up a four seconds lead on Seewer. The two Frenchman Paulin and Febvre were in a great battle for fifth place.

Febvre, who was still on the gas, moved past Paulin and set his sights on Tonus, who was looking ahead to Lieber. While Gajser though had an eight-second lead, Febvre closed in and passed Paulin for 5thand Lieber turned it up, caught and passed Seewer for second. After 11 laps the lead was more than eight seconds, with Lieber second, Seewer third, then Tonus, Febvre, Paulin, Anstie, Coldenhoff, Bogers and Van Horebeek.

Later in the race Lieber, while he had one of his season’s best crashed, suffering a fracture on the left elbow, and Seewer managed to take the second position but he made a mistake on the final lap allowing Tonus to go through and finish second. Gajser won after 18-lap lead from Tonus and Seewer.

The gate dropped in race 2 and Gajser took the FOX Holeshot in an epic MXGP race start while both Yamaha’s Febvre and Seewer crashed in the opening lap. Rockstar Energy Husqvarna Factory Racing’s Pauls Jonass was second, followed by Tonus, Anstie and Paulin. Seewer dropped down in 14th and Febvre in 23rd. After two laps Gajser held a 2.6 second lead over Jonass, with Tonus a further three seconds back in third, and Standing Construct KTM’s Max Anstie all over the back wheel of the Yamaha rider.

Five laps in Gajser was up front four seconds ahead of Jonass, and Seewer had moved up to 12th and then to 9th position.

In total control Gajser remained in a handy lead over Jonass and Tonus, with the charge by Anstie and Paulin, while Seewer being in 8th place would assure podium finish. The Top 5 lead would never changed during MXGP Race 2 until the very last lap when Gautier Paulin went through Anstie stealing a position and finishing 4th.

With another 1-1 performance, Gajser extended his series points lead over Red Bull KTM Factory Racing’s Antonio Cairoli to 83 and is without question the fastest man at this moment. Second overall in the MXGP class was Monster Energy Wilvo Yamaha Official MXGP’s Arnaud Tonus with 2-3 scores and third was his teammate Gautier Paulin with 5-4 scores. The pair of Monster Energy Wilvo Yamaha Official MXGP made history being for the first time on the podium together and tied on points.

Tim Gajser: “I am very happy and I had a lot of fun. I made the races easier with the starts, because I took holeshots in both heats and today I couldn’t wait for Indonesia already. What I was missing in the first half of the season was the starts but now they’re better, the start was great in the first race. I took the FOX Holeshot and made a gap but made a mistake and I crashed, but then I managed to make a gap again and I looked forward to the second race. I am enjoying racing very much now. The weekend couldn’t have gone better.”

Arnaud Tonus: “First race was crazier even if I could finish second when I passed Seewer at the last lap, then in the second race I needed to push at the end to keep the third position but then also Gautier made the podium on the last lap passing Anstie, and this is super cool for the team and for the great job they do for us.”

Gautier Paulin: “It has been a long time since my last podium, I had a crash in Portugal, not a lot of luck in France and in Latvia I needed to pick it up, but I was really tired about this crazy period, eventually now I’m back on the box and I am so thankful to be on the podium with Arnaud Tonus. We are back in the game.”

Red Bull KTM Factory Racing’s Jorge Prado proved to be strong in the hard pack circuit of Teutschenthal. The Spanish took the FOX Holeshot and led on teammate Tom Vialleand F&H Kawasaki’s Henry Jacobi for the whole race. Monster Energy Wilvo Yamaha’s Jago Geerts and Honda 114 Motorsports’ Mitchell Evans followed in 4th and 5th until Evans on lap 3 dropped to seventh, and after working his way back to fifth place, he crashed and exited the race.

Rockstar Energy Husqvarna Factory Racing’s Thomas Kjer Olsen had started in seventh place and lap by lap he made his way into fourth position, a position he would hold until the end of the race. Hitachi KTM fuelled by Milwaukee’s Bas Vaessen also looked strong, starting 9th, and finishing with a fifth place for the second weekend in a row. American Mitchell Harrison from BUD Racing Kawasaki also rode well on the Teutschenthal hard pack, starting in 12thand finishing in eighth.

Jacobi closed in to Vialle with the sound of his home crowd cheering but he could not manage to pass the French who set for the first time in his career the fastest lap of the race. Prado won 11 seconds ahead of Vialle and 19 seconds in front of Jacobi.

Once again it was Prado who took the Fox Holeshot, the 14thof the season, followed by Vialle, Olsen, Geerts and Boisrame, who rounded the MX2 start top 5. Jacobi was in 10th place and even further back was Harrison in 17thposition. Beaton rode smooth in sixth place after passing Vaessen and Jacobi moved into eighth place getting past Sanayei and Renaux.

While Olsen was all over Vialle for second place on lap four, BIKE IT DRT Kawasaki’s Darian Sanayei was out of the race with bike problem. Olsen and Geerts both went past Vialle, who slipped over in a corner. Later in the season Olsen also crashed and then Geerts made a mistake, so all of a sudden Vialle was second again while Olsen dropped back to sixth place just behind his teammate Beaton.

After five laps Prado was nearly eight seconds ahead of Vialle while Jacobi, who was looking for his way to pass Vialle, crashed and it cost him a bunch of positions ending up in 14th place and missing the awaited podium.

Prado was majestic as he pushed the lead to nearly 10 seconds over Vialle, while Geerts was forced to stop due to some problems with his bike. Boisrame managed to go through Vialle moving into second place for his best race finish of the season.

On lap 14 Jacobi collided with Sterry and the British rider went down hard, the accident also saw Harrison move into 10thposition. Prado won his 17thrace of 2019 over Boisrame and Vialle.

Jorge Prado: “I started the weekend a bit weak and didn’t have a good feeling, but today I turned it around and I felt better in the second race. It was a tough track but it was cool to race here. The second race was another great one for me. I felt very good compared to the first race, and I am very happy about it. Another 50 points and I’m very happy with the weekend.”

Tom Vialle: “This second place is good for me and for the whole team. I felt good all weekend. Training with Joel Smets has also helped me a lot.”