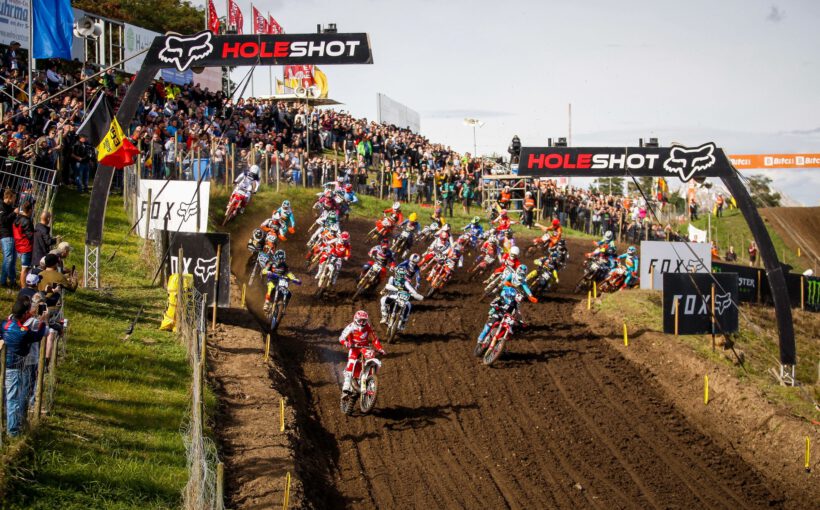 Lapucci and Van Erp win the EMX rounds in Teutschenthal.

While Lapucci extended his championship lead by 32 points over SM Action Racing Team YUASA Battery’s Kevin Horgmo in the EMX250 class, in the EMX125 Presented by FMF Racing category we saw a brand-new championship leader as Fantic Factory Team Maddii’s Haakon Osterhagen did not take part in the races due to a broken leg he picked up in late August, which allowed MRT Racing Team KTM’s Valerio Lata to take the red plate.

The first EMX250 gate drop saw Lapucci lead the way as he took the holeshot and got himself ahead of the rest of the field from early on. Jeremy Sydow of Hutten Metaal Yamaha Racing was right there in second followed by Horgmo, Camden McLellan of No Fear/Jumbo BT Racing Team and Rockstar Energy Husqvarna Factory Racing’s Maxime Grau.

Horgmo then got himself into second, as Sydow dropped from second to fourth in a single lap as McLellan also went through. Horgmo was looking to keep things close and not let Lapucci run away with it, as Rick Elzinga of TBS Conversions Racing Team joined in on the battle after making some good passes on the opening laps.

Liam Everts of Liamski KTM was one of the riders to go down as he dropped down to 22nd, while Eddie Jay Wade of Team VRT Nordpesca Holland went out of the race in the early stages of the race as he rode back to pitlane.

Back with the leaders, Elzinga was able to find a way through past Horgmo on lap five as the top three remained within 2.727 seconds.

Then it was on between Lapucci and Elzinga, as the Dutchman actively searched for every advantage over the Fantic rider. He made several attempts to pass but Lapucci was quick to react, keeping his 250 2-stroke out in front.

This fight for the win carried out until the chequered flag fell, with Lapucci securing the win as Elzinga crossed the line second just 2.511 seconds behind with Horgmo third and Hutten Metaal Yamaha Racing’s Andrea Bonacorsi having a great ride to finish the race fourth.

In race two, it was once again Lapucci with the holeshot ahead of Horgmo and Sydow. Elzinga once again started further down the field but was already up in fifth position by the end of the opening lap.

Tom Guyon of Team VHR KTM Racing started the race much better than the opening race where he hit the gate. This time he was up in third as Lapucci and Horgmo battled for the race win.

Elzinga was pushing to get with the leaders but ended up on the ground and dropped back down to sixth place as Everts started to chase him down.

Haakon Fredriksen of Riley Racing got himself into third after passing Guyon. Though the focus was on the leaders as just 1.2 seconds separated Lapucci and Horgmo, as the Norwegian tried his best to find a way through. The gap then came down to just 0.640 seconds, but Horgmo could do nothing about it.

Bonacorsi then got himself into fourth after taking the position from Guyon, as the Frenchman dropped further down the field. Fredriksen was then forced out of the race as he pushed his bike back to pitlane, while Elzinga was searching to get around Everts for fifth.

In the end, a mistake from Horgmo cost him the chance to keep fighting for the win as Lapucci secured a 1-1 result, with Horgmo crossing the line second and Bonacorsi finishing third.

With two race wins, Lapucci took to the top step of the podium, while Horgmo occupied the second step and Bonacorsi making his first EMX250 appearance with third overall.

As it stands, Lapucci continues to lead the championship as we head into round six in France, while Horgmo remains 32 points behind.

Nicholas Lapucci: “I think today was a nice one. I was feeling a lot of pain on my foot. I was not sure I was going to be here because it is really painful and big. I have no words to describe how I feel now because a 1-1 is really good given those conditions. I felt relieved when Kevin made a mistake because I could breathe a little bit. Overall, it was fun, and I am really happy with the outcome. My mindset is still the same. I take it race by race. I still don’t think about the championship, all I want is to do my best in all the races. Of course, I will think more about the championship towards the last races but for the moment I stay focused on each race”.

Kevin Horgmo: “Yeah for sure, in the first race I was also pushing hard but I did not have such a good flow like in the second race. Then I made a mistake and Rick passed me. So, I finished third, which was also okay. In the second race, I felt good from the beginning. I had some good lines and I saw that in some places I was faster than Nicholas. I was close once or twice then one small mistake led to a gap of 5-6 seconds. At that point, it was impossible to catch up. So, I was taking it easy afterwards. Overall, I am really happy with how I could push hard”.

Andrea Bonacorsi: “It was really nice to get my first podium in the second half of the season here in Teutschenthal. The first part was a little bad for me due to some problems, but now we are back stronger than ever. First race and first podium from that second half let’s say. We’re really happy and I want to thank all of my team who are really putting a lot of effort in everything. This podium is for them for sure”.

In the first EMX125 Presented by FMF Racing heat it was 9mm Energy Drink Bud Racing’s Sacha Coenen who led Cas Valk of Husqvarna SKS Racing NL, Van Erp and Lata as a few riders got tangled up in the first corner.

Coenen immediately stretched out his lead to a couple of seconds as Van Erp kept close in second with Lata hanging back in third and watching the battle right in front of him.

Bobby Bruce of ASA United GasGas Racing was making his way up the order as he chased Kay Karssemakers of Husqvarna SKS Racing NL.

Then there was drama at the front of the field as Coenen crashed out of the lead. He did get going again but was down in 17th position. Van Erp inherited and was quick to edge out by 3.629 seconds over Valk and Lata.

Bruce was then finally able to get around Karssemakers for sixth place, while Lata was able to get around Valk to move into second place. The Italian then started to push for the lead as he got all over the back of the Yamaha of Van Erp.

In the final few laps of the race, we saw Lata trying everything to get around Van Erp and after several failed attempts he was forced to settle for second as Van Erp took his first ever EMX125 Presented By FMF Racing race victory.

In race two, it was once again Sacha Coenen who got the holeshot and was ahead of Ferruccio Zanchi of Team Yamaha Europe MJC, Valk and Lata.

Lata then went down out of fourth and re-joined the race down in 17th position. Several laps later the Italian crashed once again and eventually finished the race in 13th.

Back with the leader, Coenen was leading Zanchi, Bruce, Van Erp, Valk and Andrea Viano. Viano was having a great ride in sixth, though not long after crashed out of the position.

Then we saw another Coenen, this time Lucas Coenen of 9mm Energy Drink Bud Racing making his way up the ranks as he started to apply the pressure onto Valk, with the Kawasaki rider eventually taking fifth place from the Husqvarna rider. He then set his sights on more, as he was looking to pass Van Erp, who was pushed onto the back of Bruce.

Meanwhile at the front of the lead Sacha Coenen had a 13 second lead over Zanchi. Zanchi then dropped several positions as Bruce moved into second. Van Erp and Coenen followed.

On lap eight we saw Lucas Coenen take third from Van Erp and then he started to push to catch Bruce. With two laps to go Sacha Coenen had a comfortable lead over Bruce who was being pushed by Lucas Coenen, but the Brit managed to hold on to the position.

In terms of the podium, Van Erp took to the top step of the podium with a 1-4 results, while Bruce finished second with a 3-2 result with Lucas Coenen celebrating his first podium finish with third overall.

With Osterhagen not taking part in the race, Valerio Lata has taken over the EMX125 Presented by FMF Racing championship lead, with Bruce just 3 points behind him as we head into round four in France next weekend.

Ivano Van Erp: “The last two months have been really difficult times for me. I also broke my wrist a few weeks ago, so I am happy that I could be here and get the first overall. I would like to thank my team and everyone who has supported me”.

Bobby Bruce: “We’re not really focusing on the championship too much right now. We’re only 3 rounds in. So, we will just keep taking it race by race and see where we end up. But I feel like we’re in a good position. The team and my trainer Brian are really putting in a lot of hard work, so I am happy where we are at and hopefully, we can keep progressing and get on the top step”.

Lucas Coenen: “It was a good day for me. I was not off to a good start, but I could fight back to fourth, I think. It was a good race. The gap between me and Bobby was not so big. Second race, I also did not have a good start, but I made a pass and almost got around Bobby, but I couldn’t. So, I finished third overall, which is also good and enough to make it on the podium. So, I am really happy”.

Valerio Lata: “I had a good start in the first race and was able to finish second. Second race was not good. I was off to a good start but then I crashed twice. Now we are looking forward to the end of the season with the red plate. Finally, I want to thank my team, my family and sponsors”.