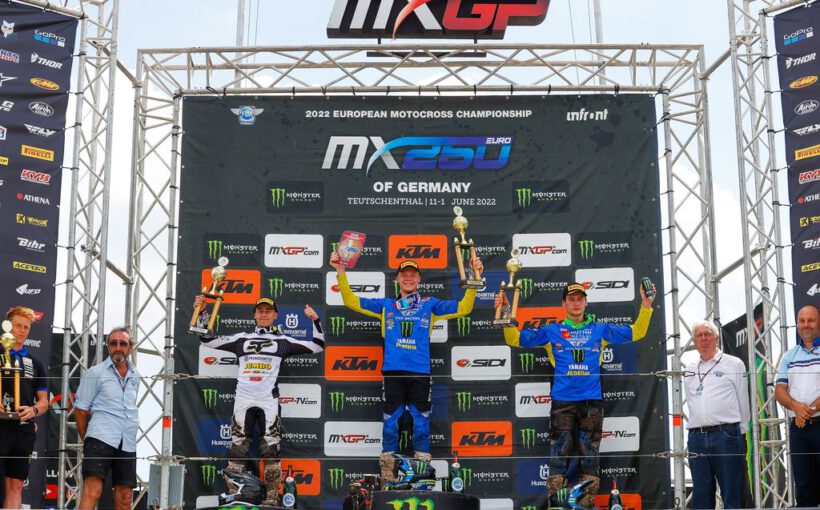 Elzinga and Fueri Top the EMX Podium at the Round of Germany.

Rounds six of the EMX250 and EMX125 Presented by FMF Racing have concluded in Teutschenthal at the Round of Germany that saw Hutten Metaal Yamaha Racing’s Rick Elzinga and Fantic Factory Team Maddii’s Alexis Fueri stand on the top step of the podium in their classes!

Immediately, Talviku took over first place and began to push in order to open up a comfortable gap from the rest of the field.

Mc Lellan caught onto the rear wheel of Elzinga and was looking to launch an attack to take second place from the Dutchman. Though the pass that Mc Lellan to execute saw Elzinga stay firm as the two banged bars which left Mc Lellan down on the ground.

Fantic Factory Team Maddii’s Cornelius Toendel was down in ninth and manage to climb a couple of positions by the end of the race to eventually finish in seventh place.

On lap four, Elzinga was back in the lead as he got around Talviku, though the Estonian was not making it easy for Elzinga as he looked to fight back. Eventually, Talviku was also caught by S. Coenen who moved up to second.

As the race progress, Talviku dropped down to seventh and then eighth by the chequered flag as Elzinga was slowly pulling away from S. Coenen. Though Coenen crashed on lap nine and while it looked like Elzinga was going to have an easy win in the bag, his teammate Andrea Bonacorsi had other ideas.

In the latter stages of the heat, Bonacorsi set the fastest lap of the race after making his way up to third behind Team VRT KTM Veritise’s David Braceras and then passing, before pushing onto the rear wheel of Elzinga and passing him on the very last lap with only a few corners from the finish line.

Nestaan Husqvarna Factory Racing’s Maxime Grau  also made a late charge as he climbed his way up the order to third after a nice battle with Quentin Marc Prugnieres of 9MM Energy BUD Racing Kawasaki.

In the end, Bonacorsi was the winner ahead of Elzinga, Grau, Prugnieres and Braceras.

In the second race, it was S. Coenen who took the holeshot and led Elzinga, Grau, Haakon Osterhagen of Fantic Factory Team Maddii and Mc Lellan, while Bonacorsi crashed and was way down the order on the opening lap.

Toendel was running well in seventh in the early moments of the race before crashing down to 14th. He did manage to fight back to seventh though by the end of the race.

Back with the leaders, Grau dove down the inside of Elzinga for second. A few laps later he had to ride defensive as Elzinga was looking to take back his position and did so by the end of lap four.

Braceras then got passed by Mc Lellan for fourth place, as Bonacorsi made a few more passes further down the order which put him on the podium, provisionally at the time as this change a couple more times before the end of the race.

All while S. Coenen was looking solid in the lead and was on his way to his first race victory in EMX250. All was looking good until he crashed big and ultimately placed in 36th. This of course gifted Elzinga the lead as Grau pushed him in second place.

In the end, Elzinga won the race ahead of Grau, Mc Lellan, Braceras and Lucas Coenen of Jumbo Husqvarna BT Racing Team.

A 2-1 result gave Elzinga his fourth overall of the season, as Grau celebrated his first ever podium with a 2-3 scorecard ahead of Bonacorsi who secured his spot on the box ahead of Mc Lellan who missed out by just one point.

After six rounds Elzinga continues to lead the championship, 20-points ahead of Toendel and then Bonacorsi who is third.

Rick Elzinga: “For me, this overall was the best of the season. It was the hardest one for sure, my body was just giving up, mentally I was there, I just tried to hang on. I was a bit lucky, did my laps and that was the most important thing of the weekend. It paid off, second and first in the races, another overall, good points, so I’m happy”.

In the opening lap, Valk dropped back to fourth and then fifth as his teammate Fueri passed him. Meanwhile further down the order, Karlis Alberts Reisulis of Yamaha Europe EMX125 MJC was making up for his poor start as he began to push inside the top five.

He quickly passed both Valk and Fueri and was in fourth, as Van Erp also got by Mikula to get himself into second position.

By the second lap, K. Reisulis was all over the rear wheel of Van Erp and by the fourth lap was ahead of the Dutchman. Then just one lap after that he also managed to fly by Zanchi and take over the lead.

Fueri then passed Mikula and then Zanchi by the 10th lap, as K. Reisulis was already more than eight seconds ahead of the rest of the riders.

Mikula needed to be careful as he had a hard-charging Valk urging him on, as he looked to make up for the slow start and maximise points.

In the closing stages, Fueri was also pushing hard as he managed to take a lot of time out of the leader and whittle the gap down to less than a second as he urged him on for the win.

In the end, K. Reisulis was able to hold on and win the race, Fueri crossed the line 0.862 seconds behind in second ahead of Zanchi, Valk and Janis Martins Reisulis.

In race two, Fueri was the leading rider out of the gate with Valk, Simone Mancini of KTM Racestore MX2, Maximilian Werner of Diga Procross KTM Racing, Zanchi and K. Reisulis just behind.

K.Reisulis then crashed on the opening lap and got going again just inside the top 20, while Fueri looked like he was settling into the lead. Van Erp crashed early on too.

Edgar Canet of RFME GasGas MX Junior Team passed Mancini to take fifth as Zanchi set the fastest lap of the race while he remained third behind Valk and Fueri. The top three were close and the battle was intense.

Further down the order, Van Erp and K. Reisulis banged bars as Van Erp moved past his teammate to get into 12th. That’s when K. Reisulis also looked like he was having issues with his bike and eventually could only salvage 10th, while Van Erp continued his assault further up the field.

In the final laps, Valk began to push his teammate as the two worked through traffic, though Fueri was able to stay mistake free and keep Valk behind him until the chequered flag. Fueri won the race, Valk was second ahead of Zanchi, Van Erp and Canet.

Valk continues to lead the EMX125 Presented by FMF Racing Championship with a 27-point advantage over Fueri, while K. Reisulis remains third ahead of his brother J. Reisulis who is fourth in the standings.

Alexis Fueri: “I try to do my best every race and every weekend. Finally, I am back on the top, it was good for me, I am happy but I need to work for Lommel”.