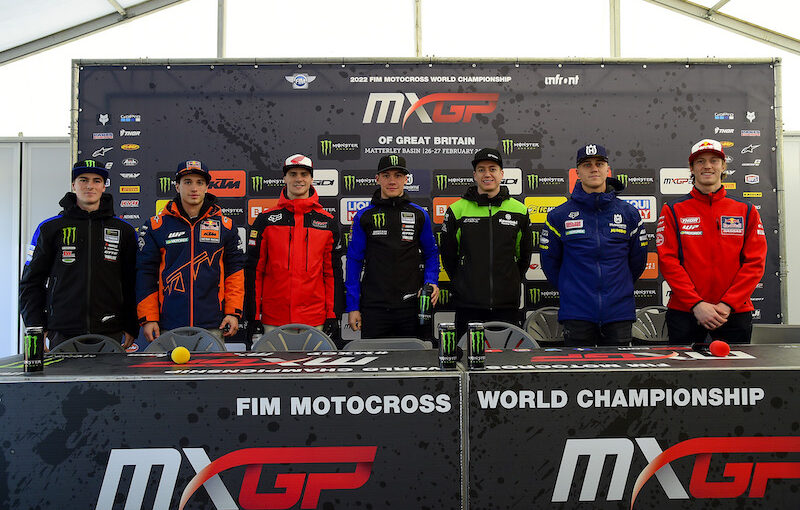 MXGP is ready for race action, following a day full of media activities that welcomed the start of the 2022 season of the FIM Motocross World Championship in Matterley Basin for the MXGP of Great Britain.

Today’s activities started the Opening Press Conferences where Infront Moto Racing CEO David Luongo, FIM/CMS Director Antonio Alia Portela and the Organiser of the MXGP of Great Britain Steve Dixon welcomed everybody to Matterley Basin. The press conference started with a video showing some of the best moments from the historic 2021 season and also looked at some of the statistics of the previous year, showcasing the success of MXGP on social media, the increase of TV coverage and the numbers reached with the MXGP Magazine as well as MXGP.com and MXGP-TV!

Infront Moto Racing CEO, David Luongo: „Welcome everybody to the opening Press Conference of the 2022 MXGP season, we are all very happy to eventually be in Matterley Basin with a sunny weekend. Looking back, the end of last season that was really intense and impressive for everybody with an epic ending in Mantova. Despite those times that were really challenging we managed to deliver two strong seasons in 2020 and in 2021 and also having the Monster Energy FIM Motocross of Nations back was a really great experience. With the help of TV and social media we were able to cover everything and show those amazing championship worldwide. Finally, we’ll be back with a full calendar including overseas like Argentina, Indonesia and the USA with the Monster Energy FIM Motocross of Nations that will take place in RedBud and this was our biggest goal as promoter, as well as to be able to welcome back the full crowd as we used to do. Despite the difficulties we are able to start the season here this weekend and I want to thank the FIM and Steve Dixon with all his crew that made this event possible and I wish a great 2022 season to all of the riders and all the people in the paddock.”

FIM/CMS Director, Antonio Alia Portela: “It is with great pleasure that we, at the FIM, are looking forward to really kicking off the 2022 season because this is what has brought us all here to Matterley Basin. First of all, I am happy to see that the paddock collective have withstood the storm Eunice in spite of the damage that it has caused. I’m very thankful to Steve Dixon and his crew for all the work that has been carried out to present a venue in perfect racing conditions. Secondly, I would also like to thank Infront Motor Racing and in particular David Luongo, for the hard work they have put into providing a solid calendar for this season and giving us all the opportunity to return to places like Argentina or Indonesia and the USA for the MXoN. Finally, I would also take the opportunity, on behalf of the FIM, to wish all the riders and teams all the best for the season. Thank you very much”.

MXGP of Great Britain Organiser, Steve Dixon: “Thanks again to everyone for coming back to England this weekend. As a team owner I know how hard it was for everyone last week. Together with Infront Moto Racing and the FIM it was a tough decision to postpone the event. It would have been devastating to not have this chance and I am blessed to have the opportunity to run it again because it takes so much adrenaline from everyone to hold this race and as everyone knows it’s my passion as well. This week has been unbelievably tough, the FIM and Infront Moto Racing have been fantastic in supporting me and that’s enabled us to come to this. Pre-sales have been good, and we look forward to a good crowd. Like everyone said it’s a nice calendar, it’s nice to start travelling again, I hope you have a nice race and enjoy the British sun this weekend”.

Following the press conference, the usual FIM briefing took place with the Team Managers of the world championship teams, to go through the rules and regulations for the upcoming season.

The day concluded with a special edition of the Studio Show with MXGP’s Paul Malin and Lisa Leyland along with an impressive 13 guests, which included Maxime Renaux, Tim Gajser, Jago Geerts, Tom Vialle, Jorge Prado, Mattia Guadagnini, Glenn Coldenhoff, Kay De Wolf, Brian Bogers, Jed Beaton, Ruben Fernandez, Ben Watson and Conrad Mewse. The Studio Show was broadcasted on MXGP-TV.com and MXGP’s YouTube and Facebook channels. If you missed it, you can watch the replay HERE!

Now with the opening events done and dusted, it is time to focus on tomorrow’s qualifying races and the action from the EMX support classes as we begin another exciting season of racing!