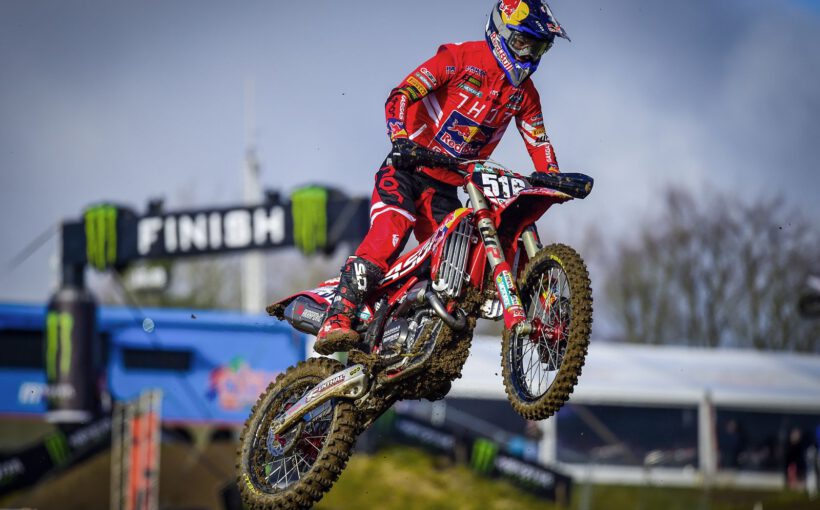 Renaux and Längenfelder Rule the Qualifying Races in Great Britain.

The conditions were perfect here for the first day of the MXGP of Great Britain with fantastic track conditions, sunshine throughout and great support from the British crowd which was topped off with great races too.

Before heading into the qualifying races of MXGP and MX2, the European classes took to the track for their first races of the weekend.

In the EMX125 Presented by FMF Racing class we witnessed some intense battles and big crashes, especially that of Karlis Alberts Reisulis of Yamaha Europe EMX125 MJC. The Latvian was leading much of the race and was looking in control until a big off caused him to lose a lot of valuable time that he had against his opponents. Eventually Ferruccio Zanchi also of Yamaha Europe EMX125 MJC was able to make a pass stick and take over the lead. Reisulis tried to fight back but had another big crash and did not finish the race. Zanchi went on to claim the first victory of the season.

Meanwhile in EMX Open, former Grand Prix rider Jose Butron put on an incredible performance as he took the win ahead of Michael Ivanov and Michael Sandner. The defending champion, Davide De Bortoli finished down in fifth ahead of Brits Dan Thornhill, Liam Knight, Brad Anderson and Tom Grimshaw, who had some nice battles up until the end of the race.

In the MXGP qualifying race, it was Monster Energy Yamaha Factory Racing’s Jeremy Seewer with the holeshot but his new teammate and MXGP rookie, Maxime Renaux, was able to slip past and take over the lead. Team HRC’s Tim Gajser move into second too, with Seewer leading his other teammate, Glenn Coldenhoff.

Red Bull GasGas Factory Racing’s Jorge Prado was able to find a way past Coldenhoff to move into fourth. Honda 114 Motorsports’ Ruben Fernandez was also running well just behind the #292.

Much of the qualifying race was a battle between Renaux and Gajser, with the Slovenian making several attempts to get by the young Frenchman. But his attempts never came to fruition as Renaux was able to hold off the four-time world champion.

While things seemed to be going well for one rookie, it was not the same for another one as Mathys Boisrame who was filling in for the injured Jeffrey Herlings of Red Bull KTM Factory Racing had a big crash in the qualifying race and did not finish the session. There is no update yet whether he will start the races tomorrow.

As the race progressed, it looked like Prado was within striking distance of Seewer, but the Yamaha rider was quick to respond, and Prado lost ground.

With two laps to go, Gajser was still not giving up on Renaux, as Fernandez was able to get by Coldenhoff for fifth place.

In the end, Renaux went on to win his first ever qualifying race in MXGP, with Gajser second, Seewer third, Prado fourth and Fernandez rounding out the top five.

Maxime Renaux: “It’s really good to start my MXGP rookie season like that. I managed to lead all the laps of the race even with Tim behind me pushing hard to catch me. I tried to manage the lead and don’t make any mistakes. I wasn’t expecting to do so good but I knew I had good potential, I wasn’t really sure about the start because the 450 is a new bike so I didn’t know what to expect from the starts. I feel confident even with the power increase and for sure tomorrow will be really important to make a good start, get the front row and make the same thing I did today”.

In the MX2 qualifying race it was Simon Längenfelder with the holeshot ahead of Red Bull KTM Factory Racing’s Tom Vialle and Kay De Wolf of Nestaan Husqvarna Factory Racing.

While the majority of the field were clean into the first corner, unfortunately one of the riders that was caught out was Liam Everts of DIGA PROCROSS KTM Racing. He did not continue with the race.

Längenfelder continued to control the field, as Vialle was looking to get by De Wolf for second. Further down the field was Monster Energy Yamaha Factory Racing’s Jago Geerts and Nestaan Husqvarna Factory Racing’s Roan Van de Moosdijk, who was making his debut on Husqvarna inside the top five.

Geerts then set the fastest lap of the race as Längenfelder started to get comfortable in the lead. De Wolf then crashed out of second and dropped down to fifth. He quickly started to come under pressure from Andrea Adamo of SM Action GasGas YUASA Battery, but was able to hold the position.

Längenfelder went on to win his first ever MX2 qualifying race with a 2.555 second advantage over Vialle and Geerts. Moosdijk finished fourth and De Wolf fifth.

Simon Längenfelder: “I had a really good start and after I managed to lead every single lap of the race. I did only a small mistake that you could see from MXGP-TV, but despite that I managed to do all properly. Being in the De Carli team is a big change for me also moving to Italy but I have to say that having so many great people around me in the team is amazing and I’m so happy to be in this team”.

Conrad Mewse: “It was a difficult and steady qualifying for me because I didn’t have a good start and I couldn’t do the passes that I wanted in the first lap. I had some problems with my goggle lens with the sun. In the end I managed to finish 8th that is not so bad, and I will try to keep some energy for tomorrow. Starting from the 8th gate is good for me and tomorrow for sure I’ll go for two solid starts and be there with the guys in front”.

With a great first day of racing, it’s all looking even better for tomorrow as we look forward to the second EMX races and the main action from MXGP and MX2 as we will see the first podiums of the 2022 season.