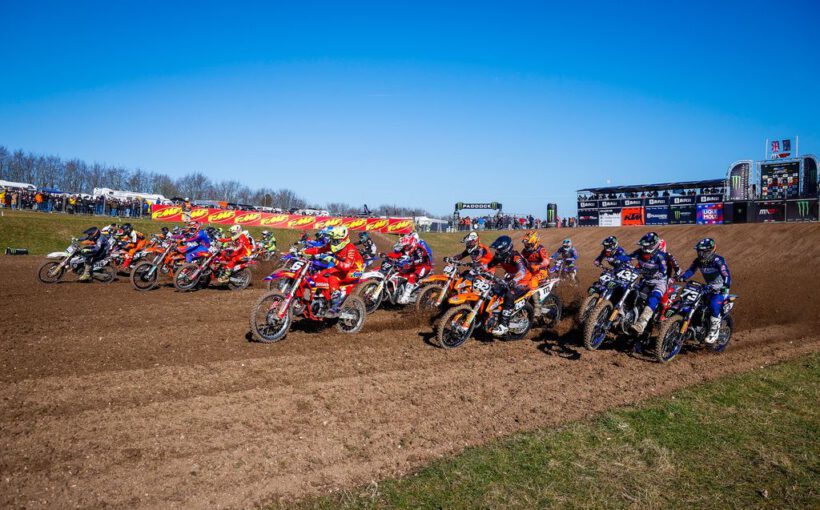 Valk and Sandner Top the EMX Podium in Great Britain.

The opening rounds of the EMX125 Presented by FMF Racing and EMX Open categories have concluded with overall victories from Fantic Factory Team Maddii’s Cas Valk and Michael Sandner of Raths Motorsports.

The European Championship riders were treated to two days of perfect conditions which made for some great racing that featured plenty of excitement and close battles.

A couple of corners later the running order was a little different with K. Reisulis still in the lead as Brit Joe Brookes moved into third and Yamaha Europe EMX125 MJC’s Ivano Van Erp into fourth.

Van Erp then took third from Brookes, as Ferruccio Zanchi of Yamaha Europe EMX125 MJC was making his way up the order but made a mistake and was off the track as he looked to get around Cas Valk of Fantic Factory Racing Maddii.

K. Reisulis then led Van Erp by 6.629 seconds after the Dutchman passed Maximilian Werner from KTM Kosak Team. But it was Valk who was pushing hard as he set the fastest lap of the race and moved himself into third, pushing Werner further down the order.

Brookes was looking strong in the opening stages of the race but then went out of the race after a crash. The Brit rode into pitlane holding his shoulder.

Janis Martins Reisulis was also having a good ride in fifth and eventually finished in third. But his brother Alberts crashed hard out of the lead and re-joined just ahead of Zanchi. Clearly shaken by the crash, K. Reisulis lost the position to Zanchi who became the new race leader on lap eight.

3 laps from the end there was another shake up as K. Reisulis crashed big again and did not re-join the race. Zanchi went on to claim the first race win of the season ahead of Valk, J. Reisulis, Fueri and Escandell.

Doing it for the girls in the EMX125 Presented by FMF Racing class was Lotte Van Drunen who made the move up to the 125cc bike for the 2022 season. She placed in a strong 30th place.

In race two, it was Fueri with the holeshot ahead of Marc-Antoine Rossi of Tech 32, Escandell and Van Erp. Van Erp was quick to make moves and got himself into second by the end of the opening lap.

Race 1 winner Zanchi was also making his way up the order as he sat in seventh behind Antonio Gallego of RFME GASGAS MX Junior Team.

Fueri was doing a great job of keeping Van Erp at bay, as the Yamaha rider went off the track but managed to keep his position.

J. Reisulis was doing great again in the second heat as he was fifth ahead of Zanchi and Valk who were closing in.

Van Erp then set the fastest lap of the race as he closed the gap down from the leader and it didn’t take him long to get by Fueri and move into first place. Rossi then started to apply the pressure onto Fueri too and moments later squeezed down the inside to take second.

Meanwhile Valk continued his charge to the front as he had both J. Reisulis and Fueri well in his sights.

While Fueri looked like he was on his way to a potential podium finish, disaster struck as the Italian went down hard. It took him a couple of minutes to get back on the bike, but he did and rode back to pitlane to DNF the second race.

Rossi then crashed out of second position as he chased Van Erp and a lap later Van Erp crashed himself. This meant that Fueri was the new race leader.

In the final laps we witnessed an intense lap between Fueri and Valk, as Valk pushed his teammate for the win. In the end he was able to make a pass stick to secure the race win and the overall victory. Fueri was second, Rossi third and J. Reisulis was fourth ahead of Escandell. Van Erp eventually came back to sixth.

Valk was the overall winner, with Fueri joining him on the podium on the second step and J. Reisulis making his first ever podium appearance in EMX125 Presented by FMF Racing.

The next round of the EXM125 Presented by FMF Racing will take place in Pietramurata on the 9th/10th of April for the round of Trentino.

Cas Valk: “Perfect weekend, not the best starts but the riding was super good. I enjoyed the track all weekend, it was really difficult, especially yesterday with a lot of arm pump but I kept pushing in the second race, made some little mistakes but I had some nice battles, also with my teammate so it was a good weekend for me, and I am super happy”.

During the first EMX Open race, it was Jose Butron who took the holeshot ahead of Davide De Bortoli, Michael Ivanov, Raf Meuwissen of Raths Motorsports and Dan Thornhill.

Ivanov then passed De Bortoli, as Butron extended his lead to 3.053 seconds. Multi-time EMX2t Champion Brad Anderson was running well in 11th as he made a wildcard appearance in the EMX Open class for the British round.

Butron continued to chip away at the lead as he extended the advantage to 5.147 seconds, as Brit Tom Grimshaw of Chambers Racing got by his fellow Anderson to take his spot in 11th.

Michael Sandner of Raths Motorsports then made his way up the order and eventually passed De Bortoli for third. Meanwhile Anderson was looking to respond and pass back Grimshaw. Ando managed to do just that and by the end of the race finished eighth.

Thornhill then closed in on Meuwissen but eventually dropped down to sixth where he finished the race, ahead of another Brit Liam Knight.

Butron went on to win the race ahead of Ivanov and Sandner. Meuwissen finished fourth ahead of De Bortoli and Thornhill.

In race two, it was Ivanov who took the holeshot ahead of Sandner and Knight. Race one winner, Butron, started outside the top 15.

It didn’t take long for Sander to get past Ivanov, as he moved into first position, all while Butron fought hard further down the field to have a chance of a podium finish.

Anderson and Grimshaw found themselves together once again as they battled for fifth and later the pair came under pressure from a hard charging Butron who was making his way through the field. Butron was actually the fastest rider on track despite being down in eighth, but that just showed how fast he was making progress.

Less than halfway through the second race we saw Anderson, Grimshaw and Butron locked in a battle for fifth. Grimshaw was trying his best to get around the #60 of Ando while also fending off Butron. Micha-Boy De Waal shortly joined the trio, applying even more pressure.

Butron first made the move on Grimshaw, as De Waal crashed out of eight to finish the race 10th.

Meanwhile, De Bortoli struggled in the second race as he was just outside of the top 10 for most of the heat. Things then became worse as his bike began to smoke. He finished 12th in the end.

Towards the closing stages of the race Anderson and Butron both got by Knight who was ahead of Meuwissen and then a few laps later Butron was able to get Anderson and Meuwissen, with the pass on the Raths Motorsports rider taking him from the third to the second spot on the podium.

In the end Sandner was able to keep Ivanov at bay for the entire race to win the second heat with a 2.199 second gap. Butron was third, Meuwissen fourth and Grimshaw got by Anderson for fifth.

A third and a win gave Sandner his first ever overall victory in the EMX Open category, as Butron took to the second step of the podium and Ivanov celebrated in third.

The next EMX Open round will take place in Pietramurata on the 9th/10th of April for the Round of Trentino.

Michael Sandner: “I’m really happy about my speed today. Yesterday I was struggling a little bit at the beginning of the race but today was really good”.