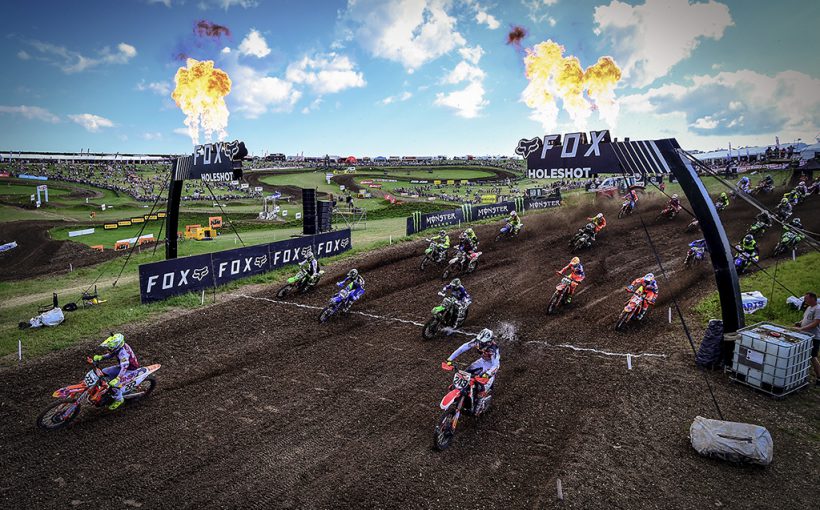 MXGP Back in Britain and Ready for Racing.

The 2019 FIM Motocross World Championship is ready for round 2 this weekend at the famous circuit of Matterley Basin! The MXGP of Great Britain will be the first round on European soil this year following the spectacular season opener in Patagonia-Argentina 3 weeks ago where Red Bull KTM Factory Racing’s Antonio Cairoli and Jorge Prado took wins.

The green and grassy hillsides of Matterley Basin are known around the motorsport world and have hosted MXGP races year after year since 2006. This famous setting for motocross is the exclusive host of only one race per year and will again come to life this weekend with the world’s best fighting for the top spots along with the always passionate British motocross fans!

Aside from the new riders who will join the FIM Motocross World Championship this weekend is a large group of European riders in the EMX250 and the new EMX2T Championship presented by FMF Racing. FIM Europe racing includes a massive entry list of 90 riders in EMX250 and another 42 in the EMX2T category. The field of riders is not only large but deeply filled with talent including former European Champions such as Thibault Benistant from MJC Yamaha Europe who steps into EMX250 and Great Britain’s own Brad Anderson on his Verde Substance KTM in the 2t class.

The MXGP of Great Britain has long been on the MXGP calendar and the Matterley Basin circuit has hosted the event for the past years with some of the most intense racing of the championship taking place here time and time again. Last year the MXGP racing was one of the most memorable all year as Red Bull KTM Factory Racing’s Jeffrey Herlings went head to head with Antonio Cairoli in dramatic fashion.

This year Cairoli returns to Matterley Basin without the threat of Herlings but while the Dutchman recovers a swarm of other riders look to make their mark at the British venue. Among these top riders are the Brits themselves including BOS Factory’s Tommy Searle, Standing Construct KTM’s Max Anstie, and RFX KTM’s Shaun Simpson.

Cairoli’s track record at Matterley Basin is by far one of the most impressive with 4 overall victories in the 8 GPs he has contended here with his worst finishes being 7th in 2013 and 6th in 2016 while the other two occasions he finished 2nd. Searle has raced here nearly as many times including 7 GPs and the 2017 Monster Energy FIM Motocross of Nations where he and Anstie took team GB to the podium for the first time in years. While Searle has only won here once in MX2 he has been on the podium 2 other occasions and in the top 5 twice as well.

Max Anstie is the true hometown hero however and although he has only reached the top 5 twice in the seven GPs he raced at Matterley the most impressive performance in his career came here in 2017 when he went 1-1 at the prestigious Monster Energy FIM Motocross of Nations.

Aside from the Brits and the current point leader, Cairoli, the traditional list of podium competitors remains consistent with the addition of Honda SR Motoblouz rider Jeremy Van Horebeek. Van Horebeek’s performance at the MXGP of Patagonia Argentina was like that of David vs. Goliath as he made the last-minute privateer effort pay off for 3rd overall. Van Horebeek has also been on the MXGP podium in Britain once before during the 2014 season.

The threats for the win at Matterley Basin are endless but other riders to watch are the always strong Monster Energy Kawasaki Racing team rider Clement Desalle and Team HRC’s Tim Gajser, who is currently second in the championship after being the closest to Cairoli throughout the season opener. Desalle was 4th last year and has been on the podium 3 times including his win here in 2013 while Gajser was 5th last year but won the overall in 2016.

Additional riders of interest include Monster Energy Yamaha Factory Racing’s Dean Ferris who fills in for the injured Romain Febvre plus the Rockstar Energy Factory Racing’s Arminas Jasikonis and Pauls Jonass. Ferris has been confirmed in MXGP for the next three rounds and raced the Matterley Basin track in 2017 for team Australia in the Monster Energy FIM Motocross of Nations event while Arminas Jasikonis had a strong debut of 6th in Patagonia and Jonass, was the 2018 MX2 winner here.

Between the two classes of MXGP and MX2 80 riders have entered into the weekends racing with both classes having a full gate of talented professionals. MX2’s younger line up is headlined by Red Bull KTM Factory Racing’s Jorge Prado after taking both last season and this year’s MX2 season opener by storm.

Prado was second here at Matterley in 2018, the 2nd place was however only to his teammate at the time, Pauls Jonass, who since moved into the MXGP category with Rockstar Energy Husqvarna.

The competition is hungrier now than ever though, with Jonass gone and Prado as the main protagonist, each of the remaining 39 riders on the gate want to make this weekend their time to shine.

Taking the spotlight in Patagonia was Honda 114 Motorsports Mitch Evans where he, as an MX2 rookie, made the podium. Evans’ speed surprised many including himself on a circuit which varied vastly from those in his native Australia or back in Europe where he has trained this off season. As the newest podium contender Evans will be looking to back up his first performance with another strong ride in Matterley.

Barely missing out on the podium at the first round to Evans was F&H Racing Team’s Henry Jacobi as he put on a strong showing after a long list of changes in the offseason from team and bike, to trainer Marc de Reuver. Jacobi was 6th here in 2018 but if his Patagonian performance was any indication of what is to come, improvement is likely this Sunday.

Rockstar Energy Husqvarna Factory Racing’s Thomas Kjer Olsen is expected to be the thorn in Prado’s championship defense this year and in Patagonia he showed blistering speed but lacked on the starts. This week’s long starting straight leads into another sweeping left turn just like Argentina, but if the Dane can start well he will be focused on not just a podium but the win as well.

While fellow riders such as Evans and Jacobi where impressive at Neuquen Monster Energy Kemea Yamaha Official MX2’s Ben Watson was left with a less than stellar ride. The Brit will be under pressure as one of the most watched this weekend, expected by many to contended for the title and in addition, he is the home favorite.

Adding to list of British riders for the local fans to cheer for is F&H Racing Team’s Adam Sterry and Hitachi KTM UK’s Conrad Mewse. Mewse has shown his speed many times before and Sterry was battle for the top five in Argentina prior to a fall setting him back. In 2016 Mewse was inside the top ten with a 7th overall but last year took 19th while Sterry has finished 17th both of the last 2 GP’s at Matterley.

Another rider not to forget is Team HRC’s Calvin Vlaanderen who was one of the few riders to win a GP in 2018, he also took his Honda to the British podium following Jonass and Prado last season.