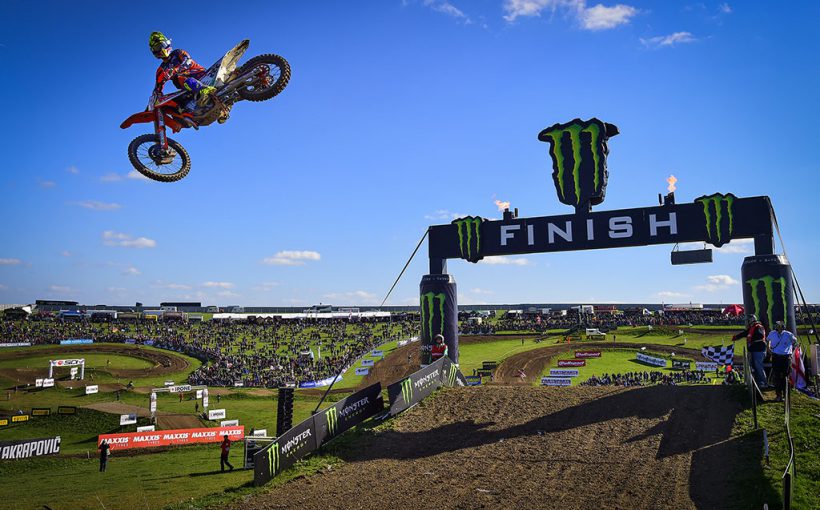 Cairoli and Olsen Master Matterley Basin at the MXGP of Great Britain.

The 2019 MXGP of Great Britainat Matterley Basin is completed after an amazing Sunday of racing! A full weekend of racing was topped off by the astonishing performances of overall GP winners, Red Bull KTM Factory Racing’s Antonio Cairoli in MXGP and Rockstar Energy Husqvarna Factory Racing’s Thomas Kjer Olsen in MX2.

The famous Matterley Basin circuit provided epic conditions and great weather to match its beautiful hillsides. The atmosphere was added to by the always vocal and enthusiastic British Motocross fans. Over the weekend a combined 10 races took places apart from practice sessions in the 2 World Championship and 2 addition European Championship classes. The full schedule left the fans plenty of action to cheer for at what is one of the best motocross tracks in the world in not just riding terms but also as a spectator.

Yesterday’s MXGP Qualifying race put Team HRC’s Tim Gajser at the top of the standings yet when the gate dropped it was Red Bull KTM Factory Racing’s AntonioCairoli who had the Fox Holeshot and lead.

Cairoli soon had the lead taken away by none other than the Slovenian. Gajser then put in a blistering pace to create a gap. Behind the former World Champions, it was at first Honda SR Motoblouz’s Jeremy Van Horebeek, but he was passed by Monster Energy Wilvo Yamaha Official MXGP’s Gautier Paulin and then made a mistake which allowed Standing Construct KTM’s Ivo Monticelli and Monster Energy Kawasaki Racing Team’s Clement Desalle through.

Only a lap later Gajser took a violent high-speed crash while leading Cairoli but miraculously sprung back to his feet and rejoined the action on his damaged Honda in 3rdposition barely ahead of Desalle. Surprisingly Gajser wasted no time putting in more fast laps even as his broken front number plate dangled on the bent bars. Gajser instead of stopping or even slowing won over many fans as he pulled away from Desalle and closed in on Paulin.

Race 2 started in similar fashion when Cairoli took the holeshot and Gajser took the lead but this time Gajser’s gap was bigger. Paulin was the third veteran who found himself at the front but the rider in 4thwas new Rockstar Energy Husqvarna Factory Racing recruit Arminas Jasikonis who had Seewer giving chase.

Jasikonis’ teammate Jonass was 6thbefore being passed by Van Horebeek but then held 7thuntil fading 4 positions in the last 5 laps. The top five however never changed positions during the race. Cairoli made a late charge in an attempt to catch Gajser, but it was too late, and the Slovenian claimed the race 2 win 1.7 seconds ahead of the Sicilian and a massive 54 ahead of Paulin in third.

The overall win went to Cairoli for his 87thtime, who later revealed a shoulder injury but Gajser ride was remarkable when considering his rebound from the race 1 crash. Paulin’s 2-3 gave him third overall as Desalle took 4thand Van Horebeek placed 5thleaving the top five riders shuffled but unchanged since Patagonia.  The series will now head to Valkenswaard for the MXGP of the Netherlands next weekend.

Antonio Cairoli, “It was a great weekend and this track is for sure one of my favorites but, today it was very difficult to push from the begging. I couldn’t really push because I am stiff on my right shoulder and neck which gave me arm pump right away. Hopefully I can be 100% again for the next race but overall I’m really happy, of course for the championship everything is going well and this is my goal.”

Tim Gajser, “Today was a special day for me and I’m really happy to finish on the podium. The first race I had a good start I was behind Tony and managed to pass him quickly but made a little gap then I made a mistake … thankfully I could continue. I was really happy to win the second race and I’m looking forward to next weekend. We can see that we are going to the right direction so we will continue pushing hard with the team and everybody I’m just happy that the pace and everything is finally back.”

Gautier Paulin, “It’s been a great weekend, it always is when we’re on the box. We improved a lot compared to Argentina, we will keep working very hard and I’m really happy with the Monster Energy Wilvo Yamaha MXGP team.”

MX2 action was filled with battles in both races as the field fought to stake their claim at the top and gain championship points. Race 1 started with Red Bull KTM Factory Racing’s Tom Vialletaking the Fox Holeshot for the second time this season.

Watson however made an unfortunate error dropping the bike early in the race which in turn dropped him 4thback to 9th. Watson teammate Jago Geerts also suffered from mistakes while running inside the top ten putting the two Kemea Yamaha’s in a difficult position.

By the second lap was Olsen though as the Dane took the spot from Vialle. Vialle then lost out to the moves of Jacobi as well when the German passed him on the outside. Local hero Conrad Mewse made moves on his Hitachi KTM UK bike from 11thto 4thbefore a mechanical issue on the last lap.

Olsen’s lead then started to be chipped at by the #29 of Jacobi but the title hopeful kept his cool and held the spot through to take the checkered flag and his first race win this season. Mewse’s 4thposition was taken by Watson, but Mewse managed to limp his bike across the finish in 6thjust behind Yamaha SM Action MC Migliori’s Michele Cervellin.

Race 2 proved that KTM and Vialle made the right choice as he took his 3rdof the 4 Fox Holeshots so far in 2019. Vialle again had Walsh just behind along with Olsen, Jacobi, and Team HRC’s Calvin Vlaanderen.

Olsen took 2ndaway from Walsh before the first lap was complete while 2018 EMX250 champion Mathys Boisrame fought in the top five on his Honda RedMoto Assomotor CRF250. A mistake from Jacobi allowed Vlaanderen to get past who then took 3rdaway from Walsh.

Jacobi then recovered and found his form to get past Walsh as well. Jacobi’s speed allowed him to catch the front runners and Vialle who dropped a spot to Vlaanderen. With less than 2 laps to go Jacobi flew past Vialle which moved the German into 3rdin the race but 2ndoverall.

Olsen’s dominant weekend continued winning race 2 by 9.9 seconds over Vlaanderen. In the overall it was Olsen’s 1-1 taking first, Jacobi’s 2-3 took 2nd, and Vialle’s 3-4 put the Frenchman on the podium in his second ever MX2 race.

Thomas Kjer Olsen, “It was amazing to go 1-1 for the first time and it was even better when I was on the podium and they gave me the red plate because I didn’t realize I would be leading the points. Overall I had a great weekend, I felt really good out on the track, I had great energy and I felt really comfortable, we even made improvements every time I was out so I was really happy with that and how the whole team is working.”

Henry Jacobi, “I had some special lines that I was seeing and nobody else took. 2nd overall is really good for us, the team, you know we are not a factory team, but we made some really good steps over the winter with F&H Racing.”

Tom Vialle,“I am really happy, it was a really good weekend, I rode well through all the sessions and races. It was a fantastic weekend and I am really happy about my starts. I feel really good on the bike and I feel that today I made a huge step, it was 2 tough races but both went very well.”