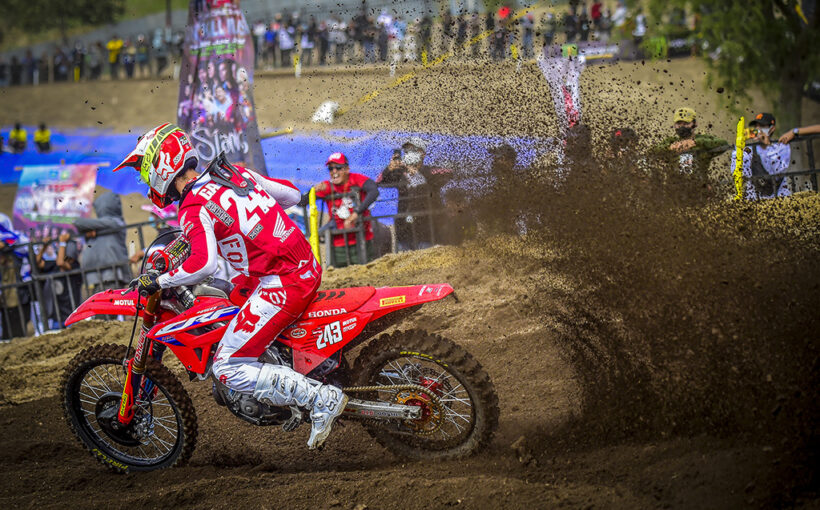 It was the first opportunity for the riders to get to grips with the brand-new Samota-Sumbawa circuit here in Indonesia. The riders looked to be enjoying the track with Kawasaki Racing Team MXGP’s Romain Febvre among one of the only riders to jump the impressive triple during the races, which left the local fans stunned.

The 12th round of the FIM Motocross World Championship taking place in Sumbawa is the first international motorsports event to be welcomed on the island, with many fans joining for the occasions of the race and the concert taking place this evening at the track!

In the MXGP qualifying race, it was Team HRC’s Tim Gajser who led the way into the first corner after a flying jump out of the gate ahead of Standing Construct Husqvarna Factory Racing’s Pauls Jonass who was quickly passed by Kawasaki Racing Team MXGP’s Romain Febvre.

Gajser was looking solid in the lead, though could not afford to relax with Febvre hot on his heels. Further behind, Jonass was coming under immense pressure from Fernandez who was looking to take third from the Latvian.

On lap six, Jonass crashed out of third and got going again in 11th just behind Kawasaki Racing Team MXGP’s Ben Watson and Nicholas Lapucci of Fantic Factory Team Maddii. By the following lap, Jonass was able to pass both as he continued his climb up the order, to eventually finish eighth.

In the closing stages of the race, Febvre was looking fast as his lap times were quicker than Gajser’s. Though Gajser was able to stretch it out to 8.724 seconds by the chequered flag to secure his second qualifying race win on the bounce.

Tim Gajser: “It was a good day. I was enjoying a lot the track, it was fun… I had a good start in the qualifying race and then I was able to make a comfortable gap immediately, but Romain was pushing, he had good lines and good pace, so in the end he started to get me, I kind of lost the rhythm a little, especially when he closed in. But in the end, I could put it together and it’s good to have first gate pick for tomorrow. I’m looking forward to it”.

Benistant then made a mistake and got passed by both de Wolf and Geerts as he dropped back to fourth. Just behind Benistant, Red Bull GasGas Factory Racing’s Simon Längenfelder began to come under pressure from F&H Kawasaki Racing’s Kevin Horgmo, with Horgmo briefly passing the German at one point, though Längenfelder was able to retaliate quickly.

Vialle looked comfortable in the lead, as de Wolf was increasing his lap times as he looked to close in on the Frenchman. The Dutchman was looking fast, though on lap six crashed and got going again in seventh behind SM Action Racing Team YUASA Battery’s Andrea Adamo.

While Geerts inherited second, he was not able to get close enough to Vialle who had already built a strong gap. In the end, Vialle won with a 7.464 second lead, while Geerts was second ahead of Benistant, Längenfelder and Horgmo.

Tom Vialle: “The weekend has started pretty good. In practice, I was first, and I had a good start in the race. Once again, it was a little bit muddy for us in the first two laps, so I tried to take it easy and then I had good pace throughout the race, I felt good on the track and in the first lap in practice. Tomorrow, the start is going to be important, and first gate pick is going to be good for the start. Of course, we want to win as much as possible and tomorrow that will be the goal”.