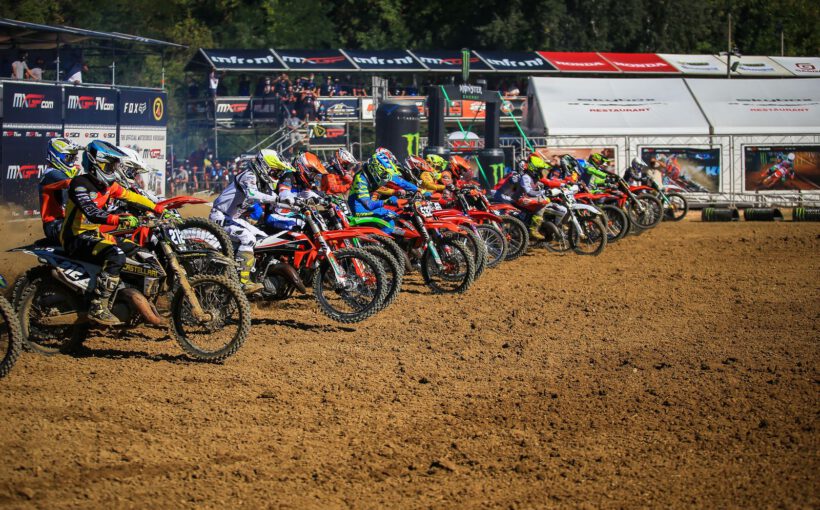 Bonacorsi and Anderson win the EMX round of Italy in Faenza!

Fantic Racing’s Andrea Bonacorsi had a perfect day going 1-1 in the EMX125 class, meanwhile Brad Anderson of Verde Substance KTM has grabbed an early lead in the EMX2T championship following a 2-1 result.

In race one of the EMX125 Presented by FMF Racing class, it was the KTM Kosak Racing rider Constantin Piller who grabbed the early lead in the race, followed by Guillem Farres and Gerard Congost of the RFME GasGas MX Junior Team, as well as Bonacorsi.

Moments later championship leader Liam Everts of KTM Liamski crashed out of fourth place, though he did eventually re-join in ninth.

As Piller continued to lead, Farres was just a further two seconds down, and was being chased down by Bonacorsi in third position, with the top three nicely bunched together, this was the start of a nice battle for the lead.

On lap four the race leader found himself in trouble, as Piller dropped out of the lead allowing Farres and Bonacorsi to move up a position. Meanwhile Everts was making a slow recovery as he passed into seventh.

Round 1 podium finisher Florian Miot from KTM DIGA Junior Racing, was having a tough race as he battled down in 18th, not where he had hoped to be following his success in Matterley Basin earlier in the season.

At the front of the field though, the battle for the race win was truly underway as less than a second separated Farres and Bonacorsi. On lap 7 Bonacorsi was able to find a way through into P1 and quickly went on to extend his lead as he set the fastest lap of the race the following time around.

As Bonacorsi doubled his lead by the next lap, Everts was making a good recovery as he got back up into 4th place, which made it easier for him to retain the red plate into race two.

In the end it was Bonacorsi, Farres and Piller, who were the top three finishers in the opening race.

In race two, it was Valerio Lata of Marchetti Racing Team KTM who was flying out of the gate and was one of the first riders to exit the first corner. Though David Braceras of the RFME GasGas MX Junior Team wasted no time as he moved into the lead, with Pietro Razzini and Farres right behind.

Meanwhile race 1 winner, Bonacorsi was down in 4th at the opening laps, though by lap 4 he was already in 3rd and breathing down the neck of Razzini. Though as Bonacorsi moved up a position, our attention was quickly drawn to the moment between Lata and Quentin Prugnieres as the two came together which almost saw Lata down on the floor, though the Italian managed to hold on and carry on with the race.

By lap 7, the fight for the lead was on, as Razzini and Bonacorsi chased down the GasGas of Braceras. As Bonacorsi closed in on the two riders ahead, he quickly found a way past Razzini and then Braceras and was now the rider to beat.

Towards the later stages of the race, disaster struck Everts, as he crashed out of 7th and did not carry on the race. Though out front it was Bonacorsi who took his second race victory on the Fantic machine, followed by Razzini and Braceras.

The overall went to the home rider, Bonacorsi who had a perfect day going on to win both races, while Guillem Farres and David Braceras made it on to the podium as the two riders representing the RFME GasGas MX Junior Team!

As it stands, despite a DNF in race two, Liam Everts continues to lead the championship, though he is tied on points with today’s winner Andrea Bonacorsi. With Bonacorsi picking up a DNF in Matterley Basin, which gave him 34th place, and Everts not finishing in race two today, he has the advantage in terms of positions as he placed 31st in the second race.

Kevin Brumann from iXS MXGP Team is third in the championship a further three points back and will be looking to pick up some solid points on Tuesday for round three of the EMX125 Presented by FMF Racing series.

Andrea Bonacorsi: “It’s been a perfect day for me with two wins. In the first race I took the first place and then I took a bit of a gap between the other riders, but then in the second race it was a little bit harder, but I won again and I’m really happy about it. I’d like to thank my team, my sponsors and the Fantic guys because they do an amazing job. Now I’m on the same points as first place so I’m also really happy about that and hoping for some good races in the next two rounds”.

Guillem Farres: “I’m feeling really good and really happy. We have been working a lot with the team during the summer and it’s great to see that all this work has paid off here in Faenza. The track is really good with some hills and I think it fits my style, I’m really happy about the podium and in the next days I feel I can do good and hopefully finish on the podium again”.

David Braceras: “I’m really happy with my riding today. We are working really hard with the team and I’m happy that the work is paying off. In the first race I had a bad start and I came back to fourth. I know I can battle for the win. In the second race I changed the gate and I got a good start, I was leading until the last five laps. I rode quite stiff but I’m happy with my riding and it’s my first time on the podium and now we will work hard for the win”.

In the opening race of the EMX2T class, it was Loris Freidig who was the early race leader, followed by the Verde Substance KTM of Brad Anderson and Federico Tuani of Husqvarna Junior Racing Maddii.

Drama followed as the riders reached the first corner with Andero Lusbo and Manuel Iacopi from JK Racing Yamaha coming together and subsequently both being forced out of the race.

Back with the leaders and Freidig was already leading by a nice 4 seconds in the opening stages of the races, as Anderson came under fire from Tuani who was breathing down his neck. Though Anderson was quick to respond and by the following lap had more of a gap between him and third place.

Kade Tinkler-Walker was having a good ride in 5th position, as Jonas Nedved also pushed Eugenio Barbaglia down another position as he followed Walker and claimed 6th.

While Freidig continued to lead Anderson by roughly 5 seconds, Gianluca Deghi was starting to apply the pressure on to Tuani, with the two riders battling for third place in the race.

Throughout the race, Freidig was able to keep a consistent gap between himself and Anderson, though with a few laps to go, the British rider picked up the pace as he chased his first race win of the season.

Despite several attempts, it was Freidig who claimed his first EMX2T Presented by FMF Racing win, as Ando crossed the line just 0.469 seconds behind the race winner. Tuani was the third rider to cross the line followed by Deghi and Walker.

In the second race, it was Barbaglia who got a flying start and was one of the first riders to reach the first corner. He led Mario Tamai, Tuani and Nedved. Meanwhile further down the field Alexandre Marques lost 6th to Marco Lolli as he moved up a position.

Keen to take the overall, Anderson wasted no time when chasing the lead and by lap 4 was already 9.681 seconds ahead of Tamai who had slipped past Barbaglia during the lap.

Following an unlucky crash in the opening race, Iacopi was having a much better start to the second heat as he moved into 11th and chased the riders in front of him.

As Barbaglia lost a position to Tuani, Iacopi was also making good passes as he moved up the order and into 7th place. Ahead of him was Lolli, Deghi and Barbaglia.

For the remainder of the race the top three didn’t change, as Anderson continued to ride a race of his own, while Tamai and Tuani were keeping behind him in P2 and 3. In the end it was how the top three remained, with Anderson taking his first race victory of the series.

With it being the opening round of the championship, the podium is also how the series standings look, with Anderson as the early leader, and Tuani and Freidig in 2nd and 3rd.

Brand Anderson: “In the first race I came around to the last corner and tried to make a move on Freidig who won it, just made a little mistake after passing him and he got me back but it was a good battle. I didn’t expect to come away with the red plate this early on as there are so many strong Italian riders here. But I am over the moon and thank you so much to everyone who helped us get here”.

Federico Tuani: “I started both races in tenth and came back to third in both races so I’m super happy. I made my first podium, so I feel amazing and I’m looking forward to Tuesday. Thanks to my team and the people who follow me and that have helped me during the tough times”.

Loris Freidig: “For the first race, for sure I am happy. I was feeling pretty good and had a good start, found my flow and could win. The second race was tough, I had a bad start and then crashed in the first lap, then I had to come from the back but in the end I felt strong I could finish seventh for third overall and it’s nice to be on the podium for sure”.