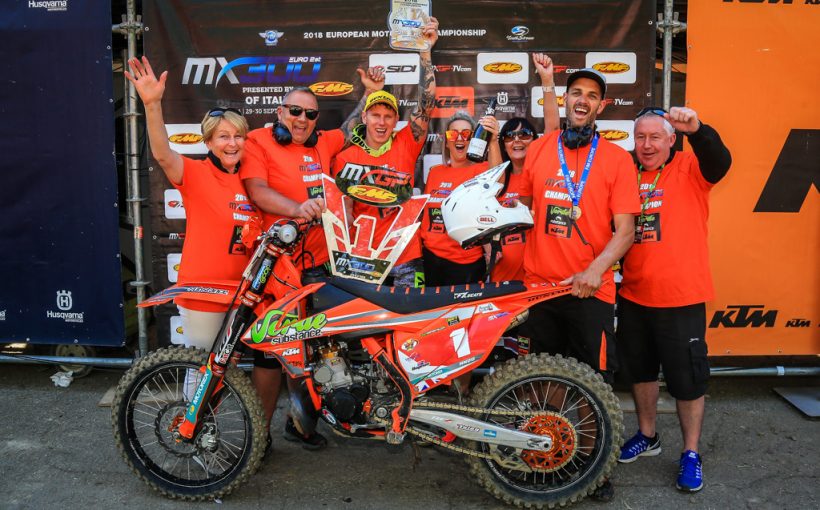 Imola is known for its road racing circuit but its history in motocross goes back 70 years when the first Motocross International races were held on its grounds. This weekend a massive amount of soil was moved to create an epic motocross track where the returning sound of two strokes echoed of the hillsides.

GL12 Racing’s Mike Kras was 27 points behind Brad Anderson from Verde Substance KTM coming into the weekend. Saturday hosted the first race of the two were we saw Kras take the lead as Anderson struggled and dropped from 4th to 7th before finally rebounding to finish 5th.

Third in the championship was A1M Husqvarna’s Andero Lusbo and he was also up in third early in the race but then had a bike issue and was unable to finish. Running 4th in the points was Vaclav Kovar but he too had issues when the chain derailed off his Gas Gas. The result of the pair going out of the race along with a strong second place ride moved Erik Willems from 5th to 3rd in the championship.

Today the 300cc 2-strokes were the second group on the prepped track and off the start Kras took the Holeshot and lead with Kovar back in second chased by Willems and Lusbo while Anderson was 7th. On the opening laps Lusbo made an aggressive but clean move to take third from Willems just as the pair came out of the final turn.

Meanwhile Kras led Kovar by just over a second as Anderson dropped back to 9th in a fight to keep the points lead. Willems and Lusbo were back at it not long after the first pass in a fight not only for third in the race but also the championship. Willems made his way back by Lusbo just in front of Pit Lane but the pair swapped positions countless more times before Lusbo finally broke free and started to pull away from the Belgian.

As Lusbo worked to catch Kovar it was Willems who was coming under pressure from Guadagnini for 4th. No passes were made however and Kras took the race win and overall with the maximum possible 50 points. Kovar took 2nd while Lusbo was 3rd, Willems 4th, and Guadagnini 5th. The celebrations were all Anderson’s however as cross the finish in 9th for 6th overall but successfully defended his EMX300 presented by FMF Racing title.