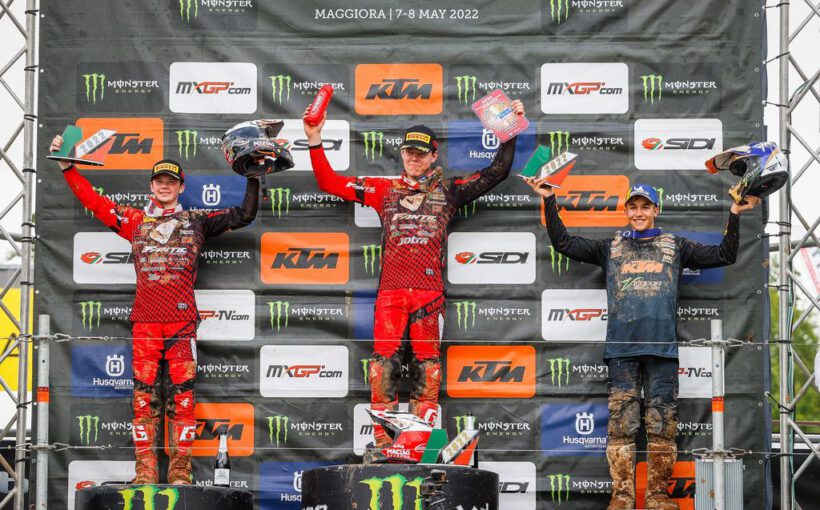 The third and fourth rounds of the EMX250 and EMX Open Championship have concluded in Maggiora for the round of Italy. The weekend saw varying conditions, with rain staying away on Saturday, though with heavy rainfall in the night, the EMX riders were presented with much tougher conditions this morning.

Fantic Factory Team Maddii’s Cornelius Toendel did not let this affect his performance, as went on to claim his first overall victory in EMX250 as well as the red plate after Hutten Metaal Yamaha Racing’s Rick Elzinga did not finish the second race and lost vital championship points.

Series leader, Rick Elzinga of Hutten Metaal Yamaha Racing started down in around tenth and was doing his best to make some nice passes in the opening laps. He caught onto his teammate Andrea Bonacorsi and passed him to move into ninth before also catching his other teammate, Dave Kooiker.

By that point Toendel was already more than four seconds ahead, as Osterhagen continued his quest for third with Martinez not backing down easily. There was not changed inside the top three until lap seven, when Osterhagen was finally able to fight an opportunity to pass for third place.

Elzinga struggled to fight back further up the field as he managed to make just one more pass before the chequered flag as him and Bonacorsi got by Lorenzo Ciabatti. In the end, Elzinga was forced to settle for seventh.

Toendel went on to win the opening race with a 5.970 second advantage over Coenen who rode a strong and consistent race and finish in second, ahead of Osterhagen who was third.

In the second race, it was Osterhagen who grabbed the holeshot from his teammate Toendel, Wade, David Braceras of Team VRT KTM Veritise and Marcel Stauffer of WZ Racing Team.

Lucas Coenen, who finished second in race one, got unlucky as he crashed on the start straight after the gate dropped, eventually managing to fight back to 15th.

Elzinga started down in around seventh behind Bonacorsi and Braceras, as Camden Mc Lellan of TBS Conversions Racing Team passed the series leader, pushing him down to eighth.

Bonacorsi then passed Braceras as he set his sights on Stauffer who managed to move by Wade for third. All while Elzinga crashed and rapidly dropped down the order. The Dutchman did not carry on with the race and therefore lost valuable points and the red plate.

Toendel set the fastest lap of the race in the early stages, as Osterhagen responded in order to keep a healthy gap at the front. While Wade lost another spot to Bonacorsi and then to Braceras and eventually Mc Lellan.

On lap six, Bonacorsi got himself into third but was too far behind the two Norwegians at the front. Osterhagen was able to maintain a clean and steady race on his way to his first EMX250 race victory, with Toendel second, Bonacorsi third, Braceras third and Mc Lellan fifth.

With a 1-2 result, Toendel celebrated an overall victory at the round of Italy, with his teammate Osterhagen in second and Braceras finishing on the box in third. With Elzinga not picking up any points in the second race due to a DNF, Toendel now leads the series, as Elzinga slips to second and Osterhagen takes the third spot.

The next round of the EMX250 championship heads to Riola Sardo for the round of Sardegna which will take place next weekend.

Cornelius Toendel: “Solid weekend, good starts and good races. The most important thing is to score good championship points and I did that, and we came away with the red plate. I would like to also congratulate my teammate; he had a good second race and it was nice to get a 1-2 for the team”.

In the first EMX Open race of the weekend, it was Rath’s Motorsports Michael Sandner who took the holeshot from JD Gunnex KTM Racing’s Jose Butron. The Spaniard was quick to get himself in the lead as Sandner followed, ahead of Stefano Pezzuto, Tomas Kohut of Osicka MX Team and KTM Beddini MX2 Joakin Furbetta, while Millionair Racing Team’s Giuseppe Tropepe started in around seventh.

Davide De Bortoli and Tropepe got around Furbetta, as Tropepe also made a pass on last year’s EMX Open champion to move into fifth as he set his sights on higher positions. By that point Butron was 3.141 seconds ahead of Sandner as Tropepe made yet another pass to get around Kohut for fourth.

Sandner and Pezzuto were locked in battle for second position as they started to close the gap to Butron who had a train forming behind him as Tropepe also joined the battle after setting some very fast laps.

On lap six Butron lost the lead to Pezzuto as Tropepe also went by. By the following lap the leader changed again, with Tropepe in the driving seat.

The final few laps of the race were full of action as the battle for the win intensified. Butron was able to close down the gap as Tropepe was caught by Pezzuto and in the closing stages of the first race, Butron was able to fight back and take over first place for the second time.

The Spaniard led the final five laps of the race as he took the race win ahead of Tropepe, Pezzuto and Sandner, with Kohut rounding out the top five.

In the second race, it was Tropepe who was the leading rider into the first corner before Simone Croci moved into the lead, all while race one winner, Butron, was down in 19th position.

Quite a few riders struggled with the muddy conditions as the track became stickier, though Croci was able to keep his focus and stretch the lead to 6.549 seconds at the early stages of the race.

Further down the order, Furbetta passed Andrea La Scala for eighth as Butron made good progress despite the tough conditions, to get himself into 11th and then a couple of laps later into 8th as he passed Furbetta.

Tropepe was able to bring down Croci’s lead, as Sandner lost a couple of positions to Jost and then Kohut. Sandner’s race only went from bad to worse as on lap eight he crashed and struggled to pick up his bike which was heavy from all the mud.

Tropepe took over the lead on lap six as Pezzuto got himself into second too, with Croci dropping to third in a matter of corners. De Bortoli was the next rider to pass Croci.

Tropepe led for two laps before going down himself and eventually ended up 21st behind Sandner.

In the final laps, Croci was able to close in on Pezzuto and challenge him for the win. The two battled closely and then it looked like Pezzuto’s bike stopped which gave Croci and easy pass on his way to the race victory. Pezzuto managed to get going in second, with Kohut finishing in third ahead of Jost and Butron who fought back to fifth.

Pezzuto claimed the overall victory with a 3-2 result ahead of Butron who was second and Croci third. In terms of the championship, Butron now leads with 150 points, 21 ahead of Sandner who lost valuable points this weekend, while Kohut is third just two points behind.

The next round of the EMX Open Championship will take place in Finland on the 13th and 14th of August.

Stefano Pezzuto: “Two good races but not really perfect for me as yesterday I was third and today second, but I am happy to get the first overall. Thanks to my team and sponsor”