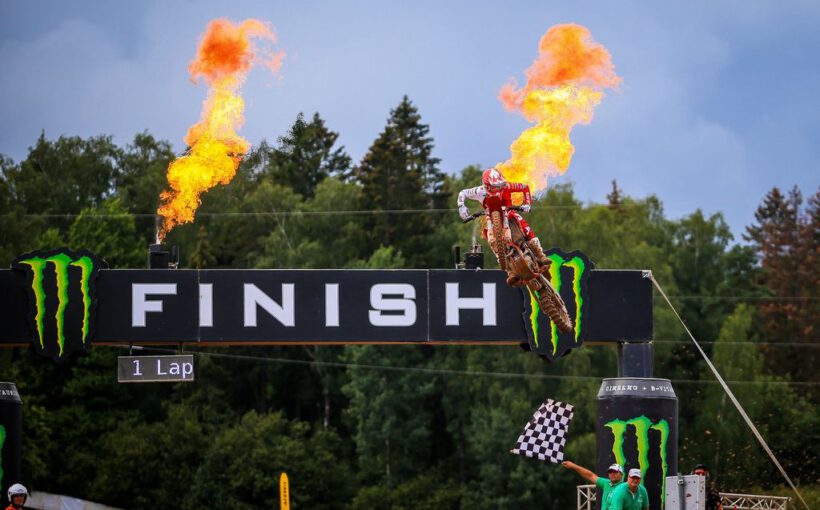 Horgmo and Krestinov Top the Podium in Latvia.

The European Championship races have concluded the first day of racing in Kegums, as Kevin Horgmo of SM Action Racing Team YUASA Battery took an overall victory in EMX250 to edge closer to the series leader Nicholas Lapucci of Fantic Factory Team Maddii. While KMP Honda Racing’s Gert Krestinov made a perfect wildcard appearance in the EMX Open class to go 1-1 and take the overall win.

In the first EMX250 race it was Maxime Grau of Rockstar Energy Husqvarna Factory Racing who was the leading rider as he headed into the first and second corner. There were a few riders caught up in some crashes during the first two laps, this included Tom Guyon of Team VHR KTM Racing and Hutten Metaal Yamaha Racing’s Andrea Bonacorsi.

Yago Martinez, the rider of Team VRT Nordpesca Holland got a good start in the race and was running fourth ahead of Rick Elzinga of TBS Conversions Racing Team and Filip Olsson of SIXTYTWO Motorsport Husqvarna Team.

Everts then dropped from the lead down to seventh after crashing, which meant that Horgmo was the new race leader ahead of Elzinga and Lapucci who made their way up the order.

Elzinga looked like he was going to challenge Horgmo for the race win, though after a few laps the Norwegian was able to edge out to secure his first EMX250 victory, with Elzinga securing second position and Lapucci finishing what was a lonely race in third.

In race two, it was Martinez who led Lapucci, Horgmo and Mike Gwerder of WZ Racing Team. While once again a couple of riders came together and it looked like Bonacorsi was involved once again.

Lapucci though took the lead on lap four as Elzinga was making his way through the field after starting the race in around 10th and was up in 5th at that moment. It also didn’t take long for him to get around Gwerder who was trying his best to keep the Dutchman behind him.

Horgmo then also passed Martinez to move into second as Everts was having a tough race after starting down the order and then crashing to drop outside of the points after working hard to get inside the top 20. He eventually finished the race in 28th.

Lapucci then stretched his lead to 3.407 seconds over Horgmo as Martinez lost third place to Elzinga who was keen on picking up some important points for the title chase.

Lapucci then checked out of the race and won with a 9.583 as Horgmo brought it home in second and Elzinga crossing the line in third.

With a race win and a second place today in the races, Kevin Horgmo secured his first ever EMX250 overall victory as he took to the top step of the podium, while Nicholas Lapucci continued his 100% podium record with second overall and Rick Elzinga making his third consecutive podium appearance to finished on the third step.

Lapucci continues to lead the championship with a 27-point advantage over Horgmo and Elzinga who is further behind in third.

Kevin Horgmo: “Actually, it’s one of the first races where I didn’t get too stressed; in both races I did quite good I had really good flow even in the rough sections of the track. I was pushing really hard in the second race because I wanted to get the maximum points for the championship; when I started thinking about the overall I made some mistakes, I got stressed and I saw that Nicholas was riding really good so I tried to calm down and be focused on the overall. The last lap was really hard because I was feeling the pressure. To win the overall has always been my dream and is always nice, I had already other chances in the past but I threw them away because of mistakes so I’m really proud of this result”.

Nicholas Lapucci: “It was a good day because I finish second overall but I’m not 100% satisfied because I didn’t’ win in the first race and my riding style wasn’t on point. In the second race I was super focused, and I really wanted the win. Now my focus is to keep the red plate until the end of the season. Next GP will be different but I’m quite confident because next round will be on hard pack track that is my favourite kind of track and I’ll do my best to win also there”.

Rick Elzinga: “I’m not completely satisfied but I’m happy that I’m being consistent; today I wasn’t feeling super comfortable and then I struggled a lot with the track especially in the first race. For me the second race was better, I had a good start, but some riders crashed in front of me and I hurt my leg so was kind of difficult to keep the flow back. Overall, I’m quite satisfied about the day because I show my potential. After Matterley Basin I changed my approach and I see what I can get race by race and do the best I can”.

The first EMX Open race saw Gert Krestinov of KMP Honda Racing and No Fear / BT Jumbo Racing Team’s Micha-Boy De Waal get a flying start as the pair were close into the first corner. Though De Waal quickly dropped to third as Jere Haavisto went through on the Dutchman.

The series leader, Davide De Bortoli started the first race in around fifth position, though by the following lap the Italian got around Dovydas Karka to move into fourth.

De Waal then got Haavisto back to move into second place as De Bortoli was making good progress to edge closer to the leaders. Lithuanian, Karka, was keeping close with De Bortoli but eventually made a mistake and lost some ground on the Italian, which allowed Simone Croci, Tim Koch and Emil Berggren to close in. In the next few laps Karka lost a few positions and eventually finished the race in 12th.

Back at the top end of the field though, Krestinov continued the lead as De Waal was pushing hard to get closer to the Estonian. A lap later De Waal lost his rear brake and went on straight as he entered the corner near the start straight and as a result, he dropped to fourth as Haavisto and De Bortoli made the most of his mistake.

Krestinov then rode his own race as he led by over 12 seconds with Haavisto failing to get any closer to the race leader. Meanwhile De Waal was making a good recovery and with two laps to go had De Bortoli in his sights for third though could not make a big enough impact to gain a position by the chequered flag. Krestinov was the race winner, Haavisto was second and De Bortoli remained third.

In the second heat it was De Bortoli who got a strong start as De Waal and Haavisto were involved in a crash.

Krestinov then took the lead from the championship leader, though made a mistake soon after which put him back to square one. Despite the mistake, the Estonian was able to fight back immediately and get out in front once again.

Karka was having a good start to his race as he was riding in third, before Honda SR Motoblouz rider Nicolas Dercourt was able to pass the Lithuanian to take his position. The pair then went after De Bortoli, though Karka was unable to stick with the two riders ahead of him as he dropped a few positions which allowed Koch and Emil Silander gain a position.

After crashing in the start of the race and having to make his way back from last, De Waal was making good progress as by lap five he was already up in seventh.

Dercourt continued his chase of De Bortoli, with the Frenchman parking the Italian to move himself into second place.

De Waal was pushing hard in the second part of the race as he managed to get around the likes of Silander and Koch, who retired from the race due to what looked like a bike issue. But for De Waal his race had just began as he got himself into fourth and was five seconds down on De Bortoli with three minutes and two laps to go.

In those next seven minutes or so, De Waal put the hammer down to pass both De Bortoli and Dercourt to finish the race in second behind Krestinov who the race winner was. Dercourt placed third in the race.

With two race victories, Gert Krestinov was the overall winner, with Micha-Boy De Waal standing in the second step of the podium, while Davide De Bortoli had a consistent day to finish on the podium once again.

De Bortoli continues to lead the championship just seven points ahead of Dercourt and De Waal who is third. Next up the EMX Open riders will head to Turkey for the final two races of the season where the 2021 championship will be decided.

Gert Krestinov: „It’s always nice to get some wins here. It’s good for me to do the European races and I got two wins. The first race to hold first position was easier, I could get a gap and easily control it whereas the second race was a little tougher and in the last two laps I saw Micha-Boy was coming so I had to wake up again and get going. It’s really good to be back in the MXGP paddock. Of course, I would like to be here all the time, but I need to see what’s best for me. I enjoyed the day, the track was really nice and my fitness was good”.

Micha-Boy De Waal: “The first race was pretty good, the start was good, I was behind Gert. After two laps my rear brake was gone and that’s why I ended up in the fence. I needed to slow down so I finished fourth which I was not too happy about. The second race the start was also good, but I crashed with two other riders and was completely last. In the first ten minutes I had no rhythm and didn’t feel good, but I knew the championship leader was a long way from me, so I needed to go to keep close, so I pushed hard and that’s what I did in the last fifteen minutes and that was pretty okay”

“I will try. 29 points in two races that will be difficult, but I will give it my all. I just hope to stay on the bike at least, that’s the main goal, I didn’t do that today, but I will go to Turkey to fight with the guys, and I hope we have some good battles”.

Davide De Bortoli: “Another decent day today. For me it was a positive day because last week I had a big crash in training, and I didn’t feel so good during the day but I tried to do my best and I am happy to be on the podium and get some points”.

“I have never seen the track in Turkey but I know it’s hard pack and I’m happy about that but there are two more races and I hope to keep the red plate for the end of the championship”.