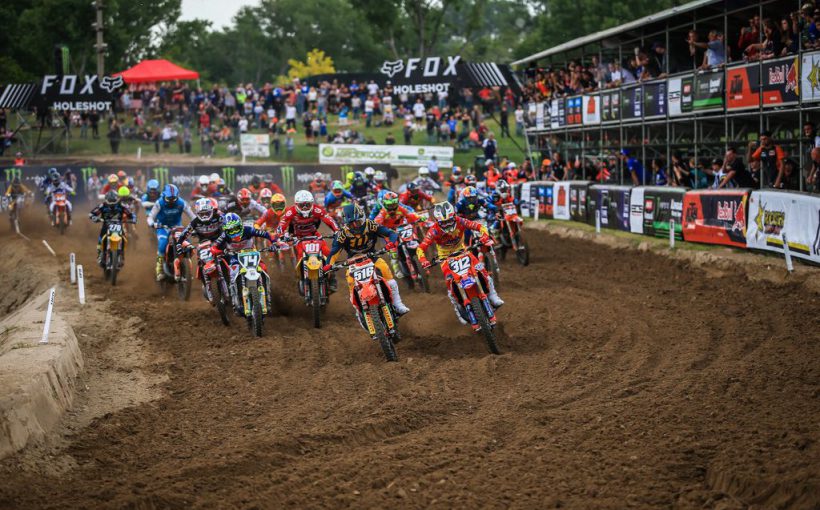 The rippers of FIM Europe made two stroke music for the thousands of motocross fans present in Mantova this weekend. Through two days of racing the conditions can only be definable as polar opposite with the lone ambiguous adjective being challenging.

The younger and smaller cc two stroke of EMX 125 Presented by FMF Racing also dealt with the same challenging conditions as even the MXGP and MX2 riders. In a class that is one of the most difficult to be consistent in even with perfect conditions Team Maddii Racing Husqvarna’s Mattia Guadagnini did the seemingly impossible with double race wins.

Race 1 was led by WZ-Racing’s Simon Laegenfelder for the first 9 laps while Guadagnini calmly worked his way past RFME MX Junior Team’s Orio Oliver to get into second. Only a lap after losing second Oliver dropped a handful of sports first to KINI KTM Junior Pro Team’s Mike Gwerder.

Gwereder held 3rd for 3 laps before A1M Husqvarna’s Jorgen-Matthias Talviku took over. The next lap was Guadagnini’s turn to make a pass and which he did successfully. The final five laps belonged to the Italian who took the win 8.6 seconds in front of Laegenfelder and 30 seconds over Talviku.

Guadagnini led de Wolf fell and dropped to 6th while Plaza’s F4E Racing KTM teammate Eddie Jay Wade took over third. With only four laps to go Wade took over the role as lead team member as he swapped positions with Plaza.

Guadagnini’s dominate and veteran like performance saw him take both his 2nd race win of the weekend and as a result the overall. Simon Laegenefelder took 2nd overall as his 2-7 finishes beat out Wade’s third overall scoring 12-2 results. Guadagnini’s points lead is now 35 as the class takes one week off before returning alongside the MXGP of France at Saint Jean d’Angely.

Rising to the occasion in the bigger bore 250 two stroke category was Team Ecomaxx Fuels’ Mike Kras. After suffering a scoreless 2nd race at the season opener in the UK, Kras had nearly two months to prepare for the return of racing.

Kras’ preparation was clear as he led Saturday’s race 1 from the first lap ahead of Todd Kellet and fellow Ecomaxx Fuels rider Youri Van T Ende while the points leader and Kras’ longtime rival Brad Anderson crashed his Verde Substance KTM on the start.

Italy’s Mario Tamai had a good home showing in 3rd Saturday after passing Van T Ende but the UK’s Brad Todd was the man making moves as he moved from 7th to take 3rd from Tamai. Kras however took the win after leading every lap over Kellet with Todd 3rd while Anderson recovered from starting outside the top 20 to finish 13th.

Today’s Race 2 brought a whole new challenge as overnight storms dowsed the circuit in relentless rain. Perhaps better accustom to the wet conditions was Anderson who, though battered and bruised from Saturday, led the first lap.

Running 2nd was Belgium’s Erik Willems who not only took the lead from Anderson but put the Brit face first into the soggy sand. Anderson got back up in 5th but had Kras just ahead in 4th. While Kras pushed forward Anderson followed before taking second from away from the Dutchman in lap 6.

Only a lap after getting by Kras, Anderson took the lead back from Willems and Kras followed. Kras made stabs at Anderson as the laps were ticked away but wisely settled for second in the race instead of risking all. Although Anderson won Race 2 the overall went to Kras who took 14 points out of Anderson’s 28 point lead.

Anderson did however still manage to get on the podium in 3rd position while Brad Todd split the pair in 2nd overall.