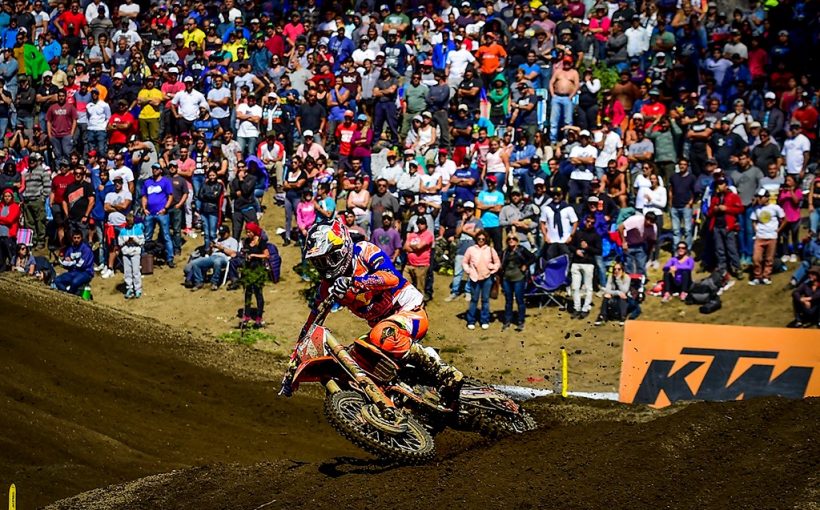 The 2018 FIM Motocross World Championship season is running in dramatic fashion setting the stage for yet another year of epic racing. The MXGP of Patagonia Argentina served as host for the first round of the new season and provided racing right off of the MXGP fan wish list. With the surroundings nothing short of serene and peaceful, the roar of MXGP and MX2 bikes brought the Neuquen region to life.

Both of the 2017 Champions returned to action amongst a field of competitors both new and old all looking to make a statement and build confidence for the remaining 18 races. Seeing the first success of 2018 was Red Bull KTM Factory Racing’s Jeffrey Herlings and Pauls Jonass.

The MXGP field is a stacked one without doubt but one thing on everyone’s mind coming into this season was how the speed of a healthy Red Bull KTM Factory Racing’s Jeffrey Herlings would compare to that of the reigning MXGP champion Antonio Cairoli.

When the gate finally dropped after months of training and preparation, Red Bull KTM Factory Racing’s Antonio Cairoli took the FOX Holeshot and led the way for every lap of the 19 recorded.

Behind Cairoli was at first the newest recruit to the Monster Energy Kawasaki Racing Team, Julien Lieber, but he was eventually shuffled back to 8th in what would be his first MXGP Championship race. First to pass Lieber was Monster Energy Yamaha Factory MXGP’s Romain Febvre who appears to have a successful bike setting at the start of the new year.

After the first laps of race one Herlings moved his way up from 4th to second passing both Lieber and Febvre.

Herlings continued in pursuit of his teammate Cairoli who was out front. Herlings was able to catch up to Cairoli but unable to make an attempt at a pass as he crossed the finish line just barely over a second later than the #222.

Coming from 6th and putting in a strong race to move his way up to 3rd was Monster Energy Kawasaki Racing Team’s Clement Desalle.

Race two started identical for Cairoli again taking the FOX Holeshot with a Monster Energy Kawasaki on his heels but it was the #25 of Clement Desalle the second time around as Lieber fell in the first turn along with Rockstar Energy Husqvarna’s Max Anstie and Bike IT DRT Kawasaki’s Tommy Searle.

Red Bull KTM Factory Racing’s Jeffrey Herlings came across the first complete lap in 5th place and seemed to struggle to find his rhythm early. Meanwhile Cairoli pulled away from Desalle up front as the two Monster Energy Yamaha Factory MXGP bikes of Jeremy Van Horebeek and Romain Febvre battled in 3rd and 4th. Herlings split the Yamaha’s for 6 laps before finally finding his way past Van Horebeek and a lap later Desalle.

With 9 minutes remaining in race 2 Herlings was near 9 seconds of the lead of Cairoli. Herlings is known not to give up easy and as he found his groove he began chipping away at the lead. In the remaining laps the #84 inched his way forward and each second he gained his confidence doubled. In an amazing effort Herlings caught Cairoli with only one lap remaining and as the approached the first corner Herlings charged to the inside of the #222 much to the Sicilian’s surprise.

Though Herlings over shot the racing line allowing Cairoli to hold the position a slight bobble from the 9-time champ helped Herlings make a move stick only a few turns later. While Cairoli led every other lap of the weekend none proved more important than the very last which Herlings snatched.

Herlings in the press conference said: “I had some battles going on for the 5th, 4th, and 3rd so by the time I got into second there was only 10 minutes left in the race and Tony had a good gap of like 10 seconds, he was riding great so to close the gap was very difficult but I luckily made it happen. I am blessed to have won the first GP, the opening GP of the year, it is really good to know all the hard work we put in during the winter is showing.”

Antonio Cairoli later said: “I am really happy to be on the podium, we almost made it the first perfect weekend. In the second race I had a good start and a good gap, I was trying to pull away a little bit and when I hit the lappers I tried to change some lines and made some mistakes. I went off the berm in a few corners and then also hit some kickers so I had to slow down a little bit. When we are riding on the limit like we were in the second race if you slow down a little bit you loose time quickly. Jeffrey was able to come closer and he was stronger in the end, the last 2 or 3 laps I was making too many mistakes, I was a little tired and he had the chance to go around me and he took it, it was a good move.”

While the top two spots were swapped between Cairoli and Herlings the final podium spot was secured by the consecutive 3-3 finishes of Monster Energy Kawasaki Racing Team’s Clement Desalle. Desalle in the press conference: “I feel good, I had a strong weekend and I see some good things… we worked a lot on the bike with the team this winter and I can see that it is working, we still have a couple of small things to improve which is good for the future but already we had a really strong weekend.”

It was the first taste of the spectacular 19 course meal which lies on the table for 2018. In 2-week time MXGP will be back in action at the home track of Herlings in Valkenswaard, Netherlands for the 2018 MXGP of Europe.

MX2’s first race of the new season was reminiscent of the 2017 season and had the perfect start for Red Bull KTM Factory Racing’s Pauls Jonass. The defending MX2 World Champion ran his red number 1 plate with pride and did it justice as he won every race of the weekend from qualifying through to race 2. Jonass on the weekend said: “I felt really good all weekend and especially on the new KTM, the bike is really good, you can see that all the testing and work we put in during the off season is paying off.”

In race one the new Honda 114 Motorsports rider Hunter Lawrence took the Fox Holeshot but it was the Bike IT DRT Kawasaki of Darian Sanayei that took the early lead, and on the third complete lap Lawrence, seen as a title contender took the premier position and set himself up well for success.

Sanayei held second for another 2 laps before Jonass moved his way forward and set his sights on the bright yellow and black gear of Lawrence. After 7 laps in second Jonass chased down the #96 and made pass for the lead finishing just under 2 seconds ahead of the Aussie.

Team HRC’s Calvin Vlaanderen came together with Red Bull KTM Factory Racing’s Jorge Prado early in the race costing both time and positions for each. Vlaanderen was able to salvage an 18th while Prado recovered to 16th.
Rockstar Energy Husqvarna Factory Racing Thomas Kjer Olsen started the race around 5th position and after battling with Kemea Yamaha Official MX2 Team’s Ben Watson he would move to 4th. At the finish Olsen took 3rd with Watson 4th as Sanayei suffered a bike issue forcing him to pull out of the race.

Race 2 started with a FOX Holeshot from LRT KTM’s Davy Pootjes but by the end of the first lap Jonass was into the lead. Rockstar Energy Husqvarna Factory Racing’s Thomas Covington was third after the first lap but he made a mistake two corners before the finish line causing him to drop to 7th immediately before eventually finishing 18th.

Covington’s teammate, Thomas Kjer Olsen put another stellar ride together in race two to finish second place in both the race and the overall. Olsen said: “I felt really good this weekend, I started off a little bit slow in practice but it was okay, I was just trying to learn the track. I was pretty pumped coming into this weekend because I knew we had good speed from the winter. To get on the podium is amazing.”

Sanayei came back to racing with a point to prove after his race one DNF. Starting in 4th Sanayei made his way to third by the end of the race followed by Ben Watson who took his second 4th of the day.

Calvin Vlaanderen also bounced back from his race 1 mishap charging forward from a 10th place start to take 5th ahead of Hunter Lawrence who reached the overall podium in 3rd with 2-6 finishes. Lawrence said: “It is a lot better start than last year. For the team’s first race and being on a new bike this year it is cool and I look forward to what the rest of the season holds.”