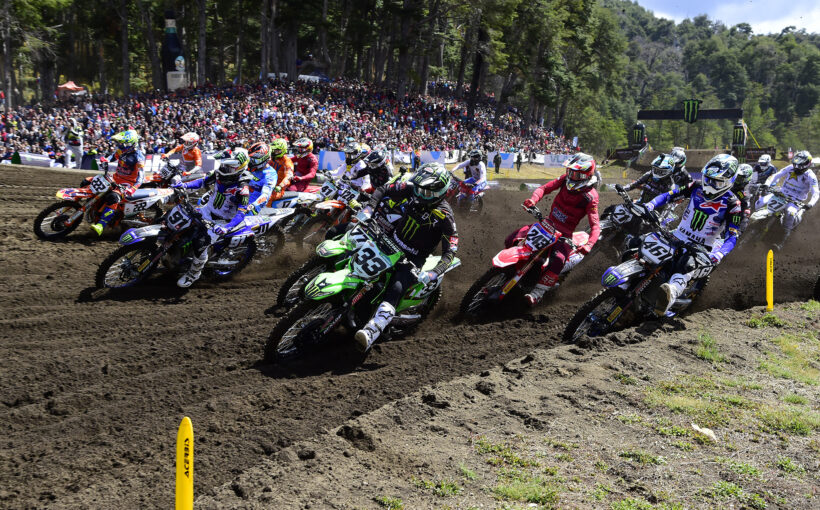 MXGP Excited for the Return of MXGP of Patagonia-Argentina.

The FIM Motocross World Championship heads overseas for the first time in 2022, as the MXGP of Patagonia-Argentina returns in Villa La Angostura.

Villa La Angostura is a resort town on Nahuel Huapi Lake in Patagonia based in the Neuquen province. It’s known for its Alpine-style wooden buildings, beautiful mountains, lakes and forests that surround the area and for much of the paddock, the MXGP of Patagonia-Argentina is among the top favourites on the racing calendar.

The MXGP of Patagonia-Argentina first made its appearance on the MXGP calendar back in 2015, with the inaugural event won by Max Nagl and Dylan Ferrandis in MXGP and MX2. Meanwhile the last time that MXGP was hosted in Villa La Angostura, was 2019 and that time around it was Antonio Cairoli and Red Bull GasGas Factory Racing’s Jorge Prado who were victorious after going 1-1 in MXGP and MX2.

This year will be the sixth time that the MXGP of Patagonia-Argentina will take place and as it stands Team HRC’s Tim Gajser, Red Bull KTM Factory Racing’s Jeffrey Herlings and Standing Construct Husqvarna Factory Racing’s Pauls Jonass have the most wins in Villa La Angostura, with two apiece, but with Herlings out with injury and Jonass having issues with his stitches post-surgery, this leaves Gajser with the chance to and claim the third victory and take the number one spot.

In MXGP, all eyes will be on Tim Gajser who will aim to keep his winning streak and make it three on the bounce, after Grand Prix victories in Matterley Basin and Mantova. Gajser is a favourite heading into the third round, and will no doubt be aiming for a clean 1-1 result which he is yet to achieve this season and having won in Argentina previously in 2017 and 2018 will hopefully be an added boost of confidence and motivation for him.

Of course, as always, we can expect previous rounds’ podium finishers Red Bull GasGas Factory Racing’s Jorge Prado, Monster Energy Yamaha Factory Racing’s Maxime Renaux and Jeremy Seewer to be right there at the front challenging for the win.

Prado has consistently been fighting at the sharp end in the first races and his starts have been a huge advantage for him – something that is bound to come in useful again in Argentina. Meanwhile Seewer started his 2022 campaign with a podium in Matterley Basin, but had a tough weekend in Mantova, a track where he claimed his first ever MXGP Grand Prix win. Though after the difficult results in Lombardia, he will be more fired up than ever to bounce back and put it on the box.

And lastly, Renaux has turned heads by claiming his first qualifying race win on his first outing in the premiere class in Great Britain and then followed that up with his first podium just two GP’s into his rookie season in Mantova, which he will be aiming to build upon and fight for a spot with the winners again this weekend.

A face to look out for this weekend is Beat SDM Corse rider Jeremy Van Horebeek. The Belgian currently sits eighth in the world championship standings after two top 10 overall finishes in the first two rounds. In 2019, Van Horebeek was third on the box next to Cairoli and Gajser, so a strong finish this time with Beta is not out of the picture.

Standing Construct Husqvarna Factory Racing’s Brian Bogers came close to a spot on the podium in Mantova, for the first time since his MX2 days. He placed fourth overall and I

it would be nice to see if he can carry this momentum and deliver a solid result and finish inside the top three.

DIGA Procross KTM Racing Team’s Thomas Kjer Olsen and Team HRC’s Mitch Evans were among podium finishers in Villa La Angostura back in 2019. The duo finished second and third on the MX2 podium which will bring back nice memories for them.

This year, Olsen gave a glimpse of what’s to come in Mantova, especially the second race as he made his way up the order to fourth. Meanwhile Evans is continuing his comeback after injury and is still building to finish inside the top 10.

In MX2, there is a new championship leader in the form of Monster Energy Yamaha Factory Racing’s Jago Geerts who had the perfect weekend in Mantova, going 1-1 and claiming the red plate for the first time since 2020. He is among the top favourites for this weekend, but there is also Red Bull GasGas Factory Racing’s Simon Längenfelder who is a big threat. The German is second in the standings, just four points behind Geerts and after missing out on a spot inside the top three in Mantova, Längenfelder will be wanting to get on the podium again and follow up his incredible performance in Matterley Basin.

But all eyes are likely to be on Red Bull KTM Factory Racing’s Tom Vialle as everyone is eager to know how the Frenchman is, after his huge off in Lombardia and what the consequences of that could really be or whether he just got lucky. This season everyone expected Vialle to dominate from the get-go and that has not happened which is making things a lot interesting in the title chase. The MXGP of Patagonia-Argentina is a chance for Vialle to take the reins once again, but he will need two clean races in order to maximise points and move up from fourth in the standings.

Other riders in that chase are Nestaan Husqvarna Factory Racing’s Kay de Wolf, who has consistently fought at the sharp end and SM Action Racing Team YUASA Battery rider Andrea Adamo who is still on the high of securing his first ever MX2 podium and doing so on home soil.

Other big threats include F&H Kawasaki Racing Team’s Kevin Horgmo who has stepped it up this season as he made his return to the MX2 category. Horgmo placed eighth overall in Great Britain and followed that up with fifth overall in Lombardia, which shows that he is building for that top three score and it could be coming this weekend.

There to challenge him, as they have been in the first two GP’s are Big Van World MTX Kawasaki’s Mikkel Haarup, Hitachi KTM fuelled by Milwaukee’s Isak Gifting and Ship to Cycle Honda SR’s Stephen Rubini. Currently they stand eighth, ninth and tenth in the standings and have been right there inside the top 10 during both races so far.

Honda 114 Motorsports Hakon Fredriksen has been building too. He finished his first MX2 Grand Prix in 14th while Mantova was much better for him, where he was sixth behind Horgmo.

Meanwhile for Red Bull GasGas Factory Racing’s Mattia Guadagnini is yet to show some strong results in 2022. His first two GP’s were far from what he may have expected and it is not entirely clear why the Italian has been struggling so much. But a new weekend is a new opportunity to bounce back and get on the right track, as we all know what Guadagnini can do, last season was a great example of that.