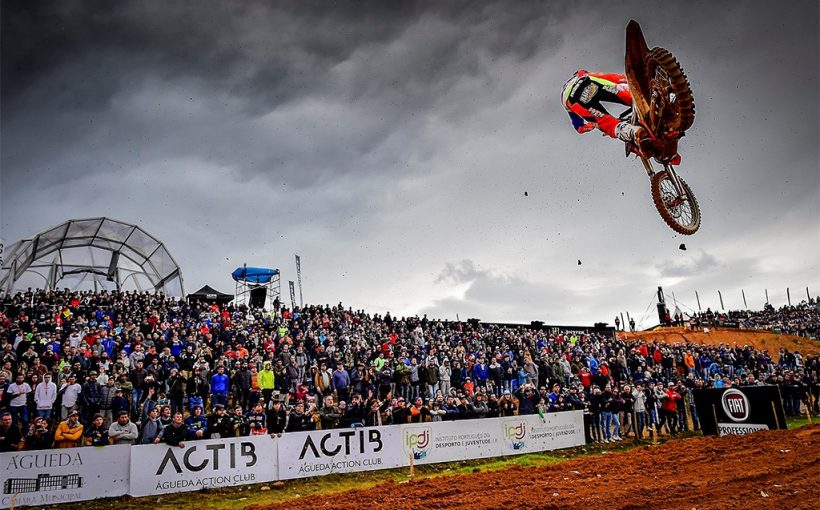 PORTUGUESE PERFECTION FOR HERLINGS AND PRADO.

The 5th round of the 2018 FIM Motocross World Championship played out today on the Portuguese circuit of Agueda. Consistently topping the result listings from practice through to the overall wins were Red Bull KTM Factory Racing’s Jeffrey Herlings and Jorge Prado! The MXGP of Portugal will be remembered as one the best tracks of the year by many riders with a multitude of lines for passing and a high level of technicality. Agueda without doubt challenged many of the world’s top riders but resulted in a perfect weekend for Herlings and Prado.

On the 4th lap of 16 Paulin pushed his way past Desalle who was suffering from a clutch issue. Desalle pulled off the track and into Pit Lane immediately but soon discovered he would not be able to finish the race. Desalle who came into the race 3rd in the championship was understandably disappointed to have a scoreless result.

With the loss of Desalle, Febvre moved into 4th but was soon moved back to 5th after Cairoli passed him on lap 7.

During the next 7 laps the top 5 remained the same until Cairoli found his passing spot. One lap after another Cairoli passed Paulin and then Gajser on the entry to the corner just before the straight in front of Pit Lane. With one lap remaining and broken goggles Cairoli was unable to catch Herlings who took the race win by 6 seconds.

Race 2 started with Cairoli ahead of Herlings but both behind Wilvo Yamaha Official MXGP’s Shaun Simpson who took his first Fox Holeshot of 2018 and the Factory Yamaha of Romain Febvre. By the end of turn 2 Cairoli take over the lead and blocked Herlings but shortly after lost the spot to the #84.

On the opening lap the 4th place finisher from Race 1, Gautier Paulin pulled of the track and of the race with an unknown technical issue. After the first complete lap Herlings already had more than a 7 second lead on Cairoli who had Desalle, Febvre, Gajser, and Simpson following.

On the second lap Simpson was passed by his Wilvo Yamaha teammate Jeremy Seewer and continued to loose positions lap after lap. Herlings grew his lead to just over ten seconds before a fall cost him 6. Herlings, still over 4 seconds ahead of Cairoli, remounted his KTM and again put down multiple fast laps.

Cairoli struggled throughout the race with a swollen right eye after the impact of the rock through his goggle in Race 1. Regardless of the hinderance Cairoli still pulled away from Desalle but was unable to keep up with Herlings.

First across the finish line, taking his 7th race win of the year, was Herlings 34 seconds ahead of Cairoli, then Desalle, Febvre, and Gajser. The most impressive ride outside of the win from Herlings was perhaps the constant charge of his dutch Red Bull KTM teammate Glenn Coldenhoff. Coldenhoff came from 15th on lap 1 to finish 6th.

In the overall standings Herlings’ perfect performance took 50 points over Cairoli’s 44 while Gajser achieved his first podium of the year with 36 points. The championship points lead of Herlings over Cairoli is now 16 with Febvre taking over 3rd from Desalle.

Herlings in the press conference said: “It was a perfect weekend, perfect starts, it can’t be any better, same as last weekend and I just want to keep it going to this way. I have so much motivation in the tank to keep going, I feel like we are a good position right now and I can’t wait for Russia already.”

Antonio Cairoli, who achieved his 150th career podium, said: “I feel good, it is a good championship but it is very difficult, you know it is always me or Jeffrey at the moment and it is difficult to stay in front always. I’m looking forward to another race in 2 weeks and I’m going to try to build up to a better physical condition.”

Tim Gajser said: “This weekend I was feeling good, also the track was really technical with many lines. I’m really happy and really looking forward to Russia.”

Perfection wasn’t only achieved by Jeffrey Herlings in MXGP it was also accomplished in MX2 by Red Bull KTM Factory Racing’s Jorge Prado. Prado won Saturday’s Qualifying Race and took the momentum straight into the start of MX2 Race 1 claiming the his 4th Fox Holeshot of 2018.

Prado was chased by Rockstar Energy Husqvarna Factory Racing’s Thomas Covington for the opening 6 laps but Covington unfortunately twisted his recovering knee and was unable to continue with the pain. The extent of the injury is unknown but hopefully we will see the American racing in two week time for Russia.

With Covington out F&H Kawasaki’s Jed Beaton assumed second position after taking full advantage of his 3rd gate pick from qualifying on the start. Beaton held the spot for 2 laps before the hard charging Red Bull KTM Factory Racing rider Pauls Jonass made it past. Beaton then managed to hold off Olsen the remaining 8 laps even applying pressure to Jonass along the way.

MX2 Race 2 came into the first turn led by Prado once again now with 5 Fox Holeshots this season. Jonass positioned himself much better to start the race, coming across the first lap in 2nd. Jonass however was quickly caught off guard by Olsen on lap 2.

Australia’s Beaton was the next to go around Jonass along with Ben Watson on the following lap. Jonass clearly struggled to find a rhythm as he ran in 5th for 7 laps then hit neutral in a rut and fell dropping 3 more positions.

Back up front Watson had made his way around Beaton and closed on Olsen for 2nd. During the final laps Olsen maintained his gap over Watson by around 2 seconds but on the final lap a handful of bobbles from the Dane allowed Watson right to his back wheel. Battling through the final turn in a race that went to the wire Watson just lost out by 17 hundredths of a second.

The nail biting finish and ability of Olsen to hold of Watson gave Beaton the final spot on the podium behind Olsen with Prado the clear winner. Jonass finished the race in 7th and took 5th overall losing ground in the championship to his younger teammate.

Jorge Prado in the press conference said: “Second win in a row, last year I won three GPs but never 2 in row so I am getting there, I am getting to where I want to be. We are training hard and it pays off, last weekend was almost a perfect weekend just lost in the last lap but this weekend I managed to take the qualification win and two races so I’m really happy.”

Thomas Kjer Olsen said: “It feels great to be up here again, I was struggling a bit in Trentino… so to come here and feel good again is really nice even though it is only a week apart. I tried to just ride relax and feel smooth on the bike, that is how I felt all weekend, I’m really happy about that and it’s really nice to be on the podium.”

Jed Beaton in the press conference: “I’m very satisfied, it is always good to be on the podium, it is what we all work for so I’m pretty stoked. This weekend the starts were better and I had a good Saturday which gave me a good gate pick making it a lot easier.”

Pauls Jonass commented: “It is still nice to have the red plate and the championship lead but I’m really disappointed with how the weekend went. I just couldn’t find the rhythm or find a flow and I was struggling a lot with the track and myself. I am happy that we have 2 weeks until the next race because I am going to work hard to be back in Russia.”