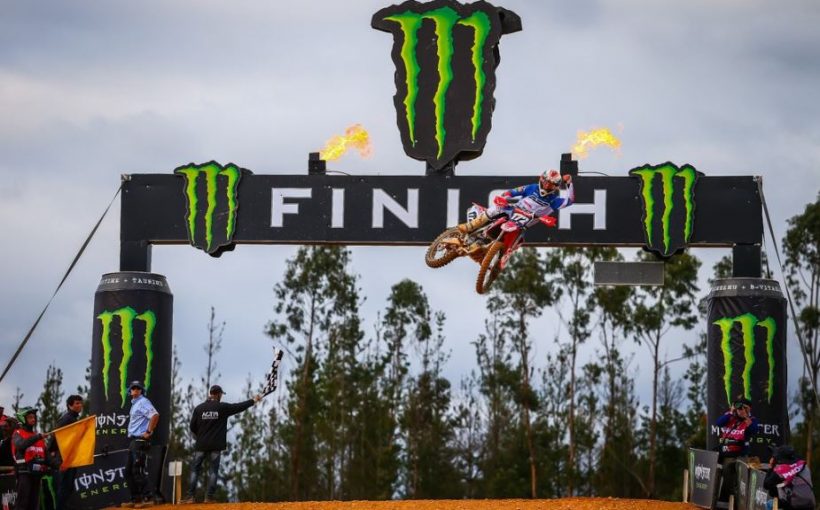 The European 250 Championship has completed its second round of the 2018 season today in Agueda, Portugal. 40 riders raced over two days in vastly different conditions alongside the stars of MXGP and MX2.

What started as 64 riders entered into racing on Saturday morning was narrowed down to the top 40 through qualifying. Making a name for himself and claiming double race wins against a stacked field of competition was Honda Redmoto Assomotor’s Mathys Boisrame.

Race 1 was led by Boisrame from start to finish in one of the most rutted circuits of the year so far. Behind Boisrame was the Team DIGA-Procross rider Dylan Walsh. Walsh held down the second spot for the first 10 laps until Rockstar Energy Husqvarna Factory Racing’s Mikkel Haarup came through from 4th.

Haarup who missed the opening round in Spain 2 weeks ago with an injury held nothing back in his impressive charge forward. Only 4 laps remained when Haarup passed Walsh, even so Walsh dropped additional 4 positions before the finish. Taking the race win was Boisrame followed closely by Haarup as Karel Kutsar took 3rd after starting in 8th. REVO Husqvarna UK’s Mel Pocock rode a steady race to finish 4th.

At the start of Race 2 Pocock led Creymert Racing’s Kevin Horgmo but Boisrame was again in a perfect position making it around both Pocock and Horgmo by the end of lap 1. Kevin Horgmo quickly became the main threat to Boisrame showing him a wheel and swapping positions with each other back and forth.

Horgmo took the lead on lap five but Boisrame find a way back past on lap 7 in an epic game of cat and mouse. The pressure never subsided from Horgmo either as he continually pushed Boisrame even amongst lapped traffic.

Another Frenchman having a strong performance was Bud Racing Monster Energy’s Brian Moreau. Moreau, the 2017 European 125 champion, started lap on in 6th but was into fourth behind Pocock on lap 4.

To the finish the battle ensued between Horgmo and Boiserame but it becames a little too late for Horgmo when Boisrame crossed the line 0.27 seconds ahead to claim double race wins and the overall victory. Behind Horgmo it was Moreau making a last lap pass on Pocock to take third.

In the overall Boisrame scored the perfect 50 points, Pocock was second with 36 and Giuseppe Tropepe’s 8-5 finishes gave him 29 points, good enough for third. Mel Pocock now leads the championship and takes the red plate heading into Russia two weeks from now.