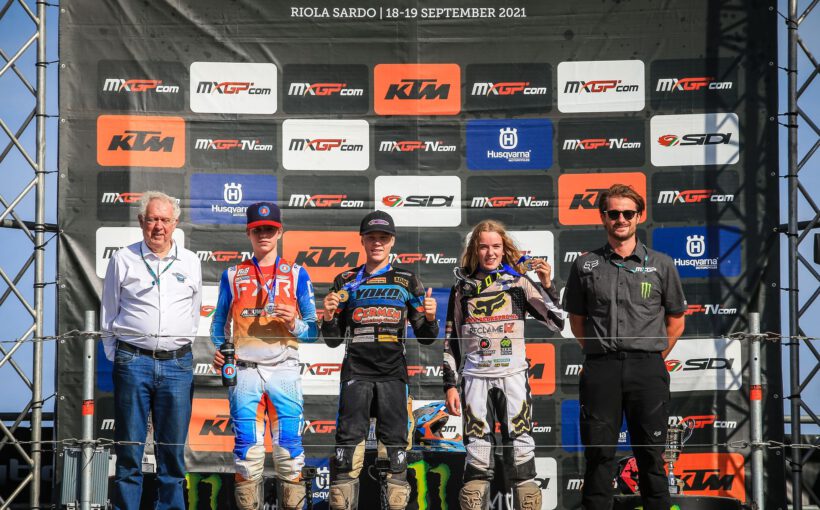 The deep sand of Riola Sardo saw the finals of the EMX85 and EMX65 European Championship finals today, with Vitezslav Marek of Czech Republic victorious in the EMX85 category, while in the EMX65 class it was Estonian Lucas Leok who took home gold.

The 85cc and 65cc youngsters were tested by the Riola Sardo circuit here in Sardinia but took on the challenge without hesitation as they got a taste of what it feels like to race an FIM Motocross World Championship circuit.

In the first EMX85 race it was Lotte Van Drunen who led the way with Janis Martins Reisulis second, followed by Amaury Maindru and Douwe Van Mechgelen.

Vitezslav Marek was making quick moves on the opening laps and got himself up three positions in one lap to move into third.

Reisulis was keeping things close to Van Drunen who looked at home in the sand and was more than comfortable in the lead. The Latvian rider made several attempts to pass the Dutch girl, but was unable to do so.

The battle between the pair went on for most of the race, while Marek was right there too. Though with four laps from the end, Reisulis dropped to third which allowed Marek to chase the win.

While Van Drunen had pulled a nice lead and it looked like she was close to getting her first EMX85 race win, Marek had other ideas. The Czech rider pushed hard and in the last two corners made the most of the back markers and got around the leader to steal the win in the final moments. Marek was the winner, Van Drunen finished second and Reisulis was third.

As the gate dropped for race two, it was Dean Greogoire who led the way as he was followed by Sandro Sols, Markuss Ozlins, Gyan Doensen and Marius Adomaitis.

Ozlins then took the lead early on, while the title contenders Reisulis, Van Drunen and Marek started the race further down the field and were fourth, fifth and sixth respectively.

The trio then moved up a position and the chase for the win was on. Doensen then set the fastest lap of the race as he brought the gap down to him and Ozlins. But on lap three there was a change for the lead as Reisulis got himself out in front.

Doensen then dropped another position as Van Drunen went through as she pushed to stay with Reisulis and Marek, while the Czech rider took second from Ozlins.

With a 1-2 result Vitezslav Marek repeated his success from 2019 when he won the EMX65 title to win the EMX85 European Championship ahead of Janis Martins Reisulis who was second with 45 points, followed by Lotte Van Drunen who was third with 42.

Vitezslav Marek: “My emotion is very fantastic because this is my first official year in 85cc class and I am very happy about it because in Greece for the Junior World Championship I was second which was sad but now I am first and I am happy”.

In the opening EMX65 race it was Moritz Ernecker who got a good start ahead of Viktor Leppälä, Andrea Uccellini and Storm Maymann. Junior World Cup winner Aaron Katona struggled from the beginning as he was caught in a crash in the first turn.

Leppälä then took the lead, while Lucas Leok was charging through the field as he got himself into second early on. It did not take long for the young Estonian to take the lead on the second lap.

Leok then led Leppälä, Michal Psiuk and Dex van den Broek who was applying the pressure onto the Polish rider. Meanwhile further down the field Katona was making good progress in the first few laps as he got himself up to eighth and was pushing for more. Eventually he finished sixth.

The lead then began to decrease, as young Lucas Leok was coming under more pressure from Leppälä. In the end it was Leok who was victorious, with Leppälä second and Van Den Broek third.

In the second race it was van den Broek who led the race, as Katona crashed on the opening lap once again. van den Broek led Leok, Ernecker and Sleny Goyer.

van den Broek was looking strong in the lead as he managed to pull a gap of 3.528 seconds at one stage of the race, though Leok was not going to make it easy for the Dutch rider.

Psiuk was also looking strong as he kept with van den Broek, Leok and Leppälä.

In the end van den Broek was able to get his head down and edge out over the rest as he finished the race 13.009 seconds ahead of Leok who settled for second while Leppälä was third.

With a 1-2 results, Lucas Leok won the EMX65 European Championship with 47 points, as Dex van den Broek was second on 45 points and Vitkor Leppälä joining the pair on the podium for third overall!

Lucas Leok: “I am very happy and I still don’t realise what I did. I want to thank my mum and dad and my sponsors for the help”.