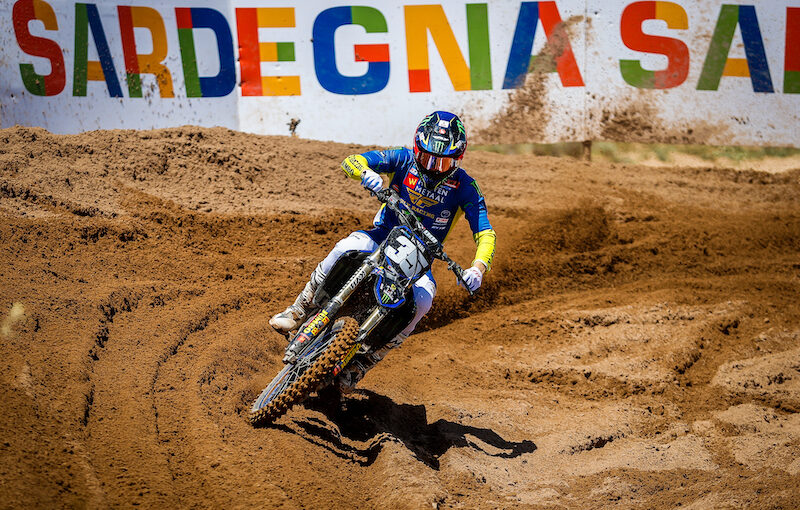 Bonacorsi Wins EMX250 Overall for the First Time in Sardinia!

At the fourth round of the EMX250 Championship in Riola Sardo, Sardegna, Hutten Metaal Yamaha Racing ended their weekend with a huge success as their riders Andrea Bonacorsi and Rick Elzinga finished 1-2 on the podium. For Bonacorsi this was his first overall victory since making the move up to the EMX250 category last year and was the perfect bounce-back after a tough start to the season, while Elzinga clawed back some vital championship points.

By the end of the opening lap, Elzinga took over the lead, as Kooiker also went by Gwerder as he got himself into second. Gwerder continued to lose positions, as he dropped down to fifth, while Kooiker set the fastest lap of the race and was right on the heels of his teammate Elzinga.

Meico Vettik had an off-track excursion as he crashed and did not finish the race.

On lap five there was a change for the lead as Kooiker was able to find a way around Elzinga, all while Lucas Coenen of Jumbo Husqvarna BT Racing Team got by Quentin Marc Prugnieres for fifth and continued his charge to the front.

Kooiker was looking strong in the sandy conditions as he pulled away by 2.543 seconds from Elzinga who was working hard to not lose grip on the leader.

Coenen then passed Valk on lap eight and then two laps later got himself into third and was not done there as he put in some strong laps to close in on the two guys at the top.

With three laps to go, Elzinga was able to bounce back and secure maximum points as he passed Kooiker, then out of nowhere came their teammate Andrea Bonacorsi who in the closing stages passed for fourth and then got Coenen for third and on the final lap also passed Kooiker for second.

In the end, Elzinga secured the win, Bonacorsi crossed the line second ahead of Kooiker, Coenen and Prugnieres.

In the second race, Gwerder once again got a strong start as he led Coenen, Bonacorsi, Elzinga and Jorgen Mathias Talviku of Sahkar Racing. Though early on in the opening lap, Coenen took over the lead as Bonacorsi also made a move on Gwerder.

The championship leader, Toendel started in around 10th as Gwerder lost another position to Elzinga who was on a charge. The Swiss continued to drop down the order until finally finishing in eighth position.

But Bonacorsi was on a charge as he caught onto the rear wheel of Coenen and on lap 10 was able to make a pass stick to take over first position. Elzinga also started to gain on the Belgian, as Coenen was doing his best to stay ahead, though a couple of mistakes crept in which cost him valuable time.

In the end, Bonacorsi went on to win the race ahead of Coenen who was able to keep Elzinga at bay, while Toendel fought back to fourth ahead of Valk.

With a 2-1 result, Bonacorsi was declared the overall winner as he secured his first-round victory in the EMX250 category. Joining him on the second step of the podium was his teammate Elzinga, who fought back some important championship points and with Coenen third on the box.

Despite not making it onto the podium, Toendel continues to lead the EMX250 Championship standings by a slim four-point margin over Elzinga, with Fantic Factory Team Maddii’s Haakon Osterhagen third.

The next round of the EMX250 will head to the legendary Ernèe circuit for the Monster Energy MXGP of France on the 4th and 5th of June.

Andrea Bonacorsi: “Finally, first overall. And finally, back on my pace, we just need to work to go more and more like that. First race was not the best start but then I knew the race was long and it was hot with big bumps but I went until the end and started to push more to finish second. In race two, I started in the top three and then I put my way on first position and kept my pace until the end”.