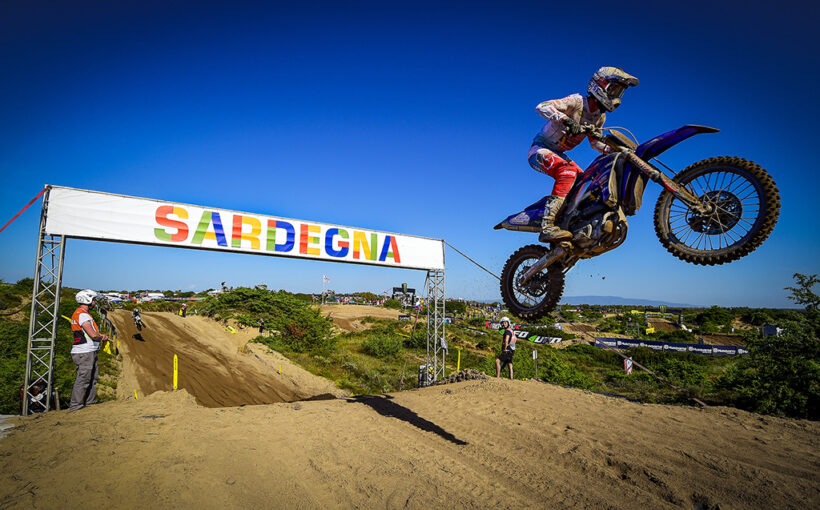 Vlaanderen and Vialle Master Sandy Riola Sardo to Win the MXGP of Sardegna.

A hot and challenging day in the sand dunes of Riola Sardo concluded the eighth round of the FIM Motocross World Championship and the second edition of the MXGP of Sardegna.

For Gebben Van Venrooy Yamaha Racing’s Calvin Vlaanderen it was an unforgettable weekend as he topped the charts in every session over the weekend, won the qualifying race and both heats to secure his first ever overall victory in the MXGP category. Meanwhile Red Bull KTM Factory Racing’s Tom Vialle also celebrated big as he secured his first GP victory since Trentino and his second here in Riola Sardo.

In the first MXGP race of the day, it was Team HRC’s Tim Gajser who claimed his second Fox Holeshot of the season and led the way ahead of Red Bull GasGas Factory Racing’s Jorge Prado and Standing Construct Husqvarna Factory Racing’s Pauls Jonass.

As the race got going, Alberto Forato of SM Action Racing Team YUASA Battery and Fernandez went down together, as Renaux also crashed once more.

Seewer then passed Van doninck for fourth on the second lap as Vlaanderen followed too. The South African born Dutchman then, set his sights on the Swiss as he set the fastest lap of the race. Though it took Vlaanderen a total of five laps to actually get by the Factory Yamaha rider.

Vlaanderen’s pass on Seewer came shortly after the pair got around Jonass and by the 10th lap Vlaanderen was third. Gajser continued to lead the way with Prado in second.

Team HRC’s Mitch Evans was also looking good as he got by Van doninck for sixth and then got around Jonass too. Things were looking good for the Australian until lap 15 when he fell back to 12th and eventually ended up 22nd.

Red Bull GasGas Factory Racing’s Mattia Guadagnini was having a good ride in around 10th and just slipped back to 11th towards the end of the race.

On lap 14, Vlaanderen eased past Prado for second and then set his sights on the win. The Yamaha rider had some very fast laps and with two laps from the end got by Gajser to win his first ever MXGP race. Gajser crossed the line in second ahead of Prado, Seewer and Bogers.

In race two, the Fox Holeshot went to Prado, who led Jonass, Fernandez, Vlaanderen, Coldenhoff and Gajser. Kawasaki Racing Team MXGP’s Ben Watson and Evans were unlucky in the first corner as they went down.

After a better start in the second race, Vlaanderen looked determined to make quick moves to the top but Jonass made him work for it, as it took the Dutchman four laps to find his way into second.

Gajser was having a much tougher second race as struggled in sixth. The Slovenian was briefly passed by Renaux though got him back shortly after. Though crashed and then faded down to 12th, as it was revealed that he had struggled with a sickness during the weekend.

On lap six, Coldenhoff got Jonass for third, and Renaux and Seewer were next to go by the Latvian as the two teammates battled on. Seewer briefly passed his teammate and then shortly after got Fernandez too but made a small mistake and crashed.

The Swiss was not finished as he passed Guadagnini and Jonass within the same moment as he got going again.

Meanwhile on lap eighth Vlaanderen eased past Prado for the lead. He looked in control for the rest of the race as the heat and tough track conditions did not look like they were affecting him. A couple of laps later Coldenhoff also got by Prado too.

In the end, Vlaanderen won the race ahead of Coldenhoff, Prado, Renaux, and Bogers.

A perfect 1-1 scorecard gave Vlaanderen his first overall victory in the MXGP category, with Prado making his return from injury onto the second step of the podium, while Coldenhoff celebrated his first trip to the box in third!

Despite not making it onto the podium, Gajser still leads the championship with a 79-point advantage over Renaux and Seewer, as Prado remains fourth in the standings.

Calvin Vlaanderen: “I’m speechless. Just honestly, it was a perfect weekend. I was first in every single session that mattered. First in time practice, first in the qualifying race and then both races. It’s just… I don’t know what to say, just years and years of hard work, this is what I dreamed of coming into MXGP. You know, winning and to be here right now. It’s like a dream. I just wish my family was here and everyone from back home”.

“I think it all started with the week leading up to this, like mentally it’s such a big thing in the sport, especially at this level to believe you can win. And coming to this weekend, I honestly believed for the first time in my career, I can win it. And it’s such a nice feeling, just confidence and it showed today that I could do it”.

Jorge Prado: “It was great to get back to racing. Obviously, after the shoulder injury and three weeks off the bike. Sardegna is not the easiest track and I didn’t even know if I could ride. So, Saturday I took it easy, and I saw that I could manage to ride and ride quite well. I was quite motivated to get back on track and just take some points and see where we’re at. And here I am going on the podium, second overall. It’s a great way to come back to MXGP. It’s a pity about this shoulder injury, but if I could do this, like this, I think many great things will come in the future. So, I will keep working and I will go for it”.

Glenn Coldenhoff: “In the first race I didn’t start so well, somebody crashed in front of me in the second turn and I had to go all the way to the back. Actually going into this weekend I was sick, also in Maggiora already and we tried everything with the team to get healthy again but it looked like it was stuck with me. In the second race, I got a little better start. Then I made a mistake, but I saw Calvin pushing hard in the beginning, so I felt like I wanted to go with him. Congrats to Calvin, he was riding really good. I couldn’t follow but still I had a good feeling. Even after that second race I wanted to go straight to the track again because I didn’t expect the podium, but it’s good to be here. And again, it’s been a tough road. That I know I can do it, but it was just a bit difficult. But here we are again”.

Red Bull KTM Factory Racing’s Tom Vialle was down in around sixth as Liam Everts of Diga Procross KTM Racing and Riley Racing’s Joel Rizzi went down in the first corner.

Vialle had a very good opening lap as he got around Red Bull GasGas Factory Racing’s Simon Längenfelder, Mewse and Horgmo, to get himself into third. The Frenchman then began to chase down his fellow countryman, Benistant, and why the second lap was already in second place.

A strong ride in the opening laps put Vialle right on the rear wheel of Geerts and then we witnessed the two go head-to-head for the rest of the race.

Mewse then had an issue and pulled into pitlane. He did not finish the race.

At the mid-way stage of the race Horgmo began to fight back as he joined the battle between Adamo and Haarup. On lap 12 Horgmo passed Haarup and then a lap later got around Adamo, before being passed back by Haarup and finishing fifth.

In the final few laps it looked like Vialle was going to challenge Geerts for the win, but ended up tucking the front and going down. He got going quickly and did not lose any positions. Meanwhile Benistant continued his solid race in third.

Geerts went on to win the race, with Vialle second and Benistant third, ahead of Haarup and Horgmo who rounded out the top five.

In the second race, Benistant took the Fox Holeshot again. Vialle was second ahead of Adamo, Geerts and Horgmo, Geerts passed Adamo for second as Vialle took over the lead. Benistant dropped back to third.

Adamo then came under fire from Hitachi KTM Fuelled by Milwaukee’s Isak Gifting as he got himself into fifth, while Geerts was able to find a few good lines to get close to Vialle.

There was not change inside the top 10 for a while and the focus remained on Vialle and Geerts who were pushing each other throughout the race. Both were making mistakes which was an advantage to the other but ultimately, Vialle was able to keep a cool head under pressure and win the second heat. Geerts was second, ahead of Benistant, Horgmo and Gifting.

Haarup finished sixth in the race but was given a five-place penalty for failing noise control after the race.

A 2-1 scorecard gave Vialle his first overall win since Trentino and his second victory in Riola Sardo, as Geerts was forced to settle for second ahead of his teammate Benistant who made his return to the podium.

In terms of the championship standings, Geerts maintains the red plate with a 6-point advantage over Vialle and Längenfelder who is third.

The next round of the FIM Motocross World Championship heads to intu Xanadú – Arroyomolinos for the MXGP of Spain in a couple of week time.

Tom Vialle: “I’m really happy to win today. It was a tough track and it was really hot also. In the first race I didn’t have a super start let’s say and I was around sixth in the first corner. I passed quickly after two laps, was already behind Jago and just tried to push all the race, but the track is not easy to pass when you ride on the same speed and then I had a small mistake on the last lap. But anyway, I was feeling actually pretty good and in the second race I had a much better start, I took the lead after a few corners until the end. I could control the race and it was really nice to win. The bike was working amazing today, so I am pretty happy”.

Jago Geerts: “It was quite a tough day. The track was really rough and then with the hot weather, it didn’t make it easier. But I rode two good races today, first race I took the lead in the first or second lap and just had a good pace until the end. Tom was also pushing me so I knew the second race would be tough for sure. And then Tom got a better start in the second heat that made it a bit easier for him and it was me that time around trying to follow him and finished second. I’m happy about today, didn’t make big mistakes and took second place”.

Thibault Benistant: “The weekend was not really easy in the beginning because I didn’t make some really good lap times, I was feeling good but not really free and then during the qualifying race I took a good start and I was riding not so bad, which was good for today. And today I took two Fox Holeshots so mentally was really nice, Tom and Jago were really fast so I just stayed on my speed and tried to not to make mistakes, I was focused on myself and riding and it was quite good”.