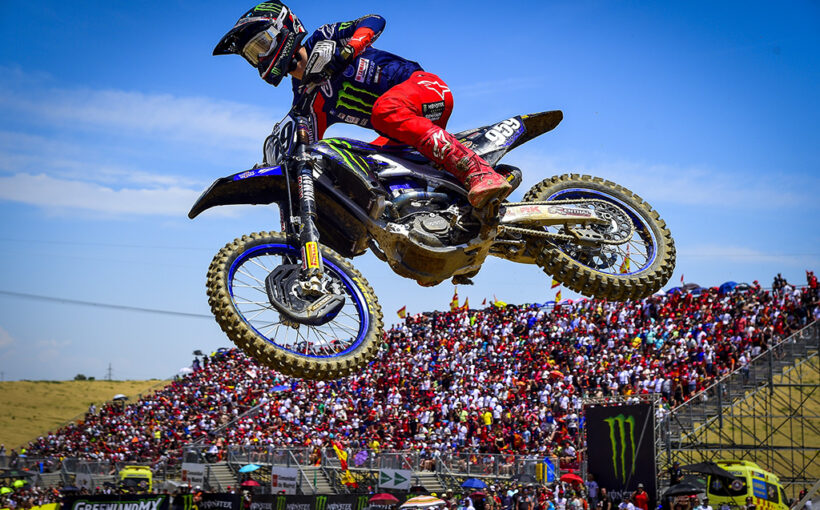 French Affair at the Spanish GP as Renaux and Vialle Top the Podium.

A hot weekend in Spain concludes the ninth round of the FIM Motocross World Championship as Monster Energy Yamaha Factory Racing’s Maxime Renaux and Red Bull KTM Factory Racing’s Tom Vialle topped the podium at the MXGP of Spain, while home hero Jorge Prado of Red Bull GasGas Factory Racing suffered heart break as he failed to make it to the box on home soil.

It was a perfect weekend for both riders, who went 1-1 in their respective MXGP and MX2 races, showing their strength as they prepare to head to their home GP in France next weekend.

There was more to celebrate as Red Bull GasGas Factory Racing’s Simon Längenfelder made his much-anticipated return to the box since round one in Matterley Basin, while Monster Energy Yamaha Factory Racing’s Glenn Coldenhoff celebrated a back-to-back podium and Standing Construct Husqvarna Factory Racing’s Brian Bogers secured his second GP podium of the season.

Renaux was not looking to hang around as he swiftly moved into the lead as Gajser began to come under pressure from a hard-charging Brian Bogers of Standing Construct Husqvarna Factory Racing.

It looked like Prado was getting ready to launch an attack onto Renaux for first place but found himself in hot waters when Gajser began to edge closer and apply the pressure too. Prado then made a mistake, which allowed Gajser down the inside and into second place.

Renaux then set the fastest lap of the race as he gapped Gajser by 2.125 seconds, all while Prado was being pressured by Bogers. Monster Energy Yamaha Factory Racing’s Glenn Coldenhoff was also there in fifth.

Monster Energy Yamaha Factory Racing’s Jeremy Seewer then crashed out of seventh and got going in 12th as Prado also made a mistake but managed to keep it on two wheels. Seewer then fought his way back up to 11th after passing Team HRC’s Mitch Evans who dropped a few positions by the end.

Despite closing down the gap on several occasions, Gajser could not find an opportunity to pass Renaux, with the Frenchman going on to win the race. Gajser crossed the line in second, ahead of Prado, Bogers, Coldenhoff and Honda 114 Motorsports’ Ruben Fernandez who placed sixth.

In the second race, the Fox Holeshot went to Prado once again as he led Renaux, Coldenhoff, Bogers and Guadagnini, while Gajser got squeezed.

In the opening lap, Coldenhoff took second from Renaux, who responded immediately to take back the position. This allowed Prado to edge out by a couple of seconds as Renaux and Coldenhoff continued to battle it out.

Prado then set the fastest lap of the race on lap five before going down shortly after. The Spaniard got going fairly quickly as he re-joined the race just ahead of Gajser, though the Slovenian was able to pass him very quickly as he carried better momentum.

This meant that Renaux led the way, with Bogers third, separating the three Yamaha riders, as Seewer was running well in fourth. Guadagnini then began to close in on Seewer, as Gajser continued to struggle to find an opportunity around the Italian.

There was not much change inside the top 10 as riders settled into their positions, with Renaux keeping a cool head ahead of his teammate who remained close throughout.

In the final few laps, we saw Prado battled with Fernandez, though the Honda rider was able to keep his fellow countryman at bay, as Prado crashed again and finished 11th.

Renaux went on to win the race ahead of Coldenhoff, Bogers, Seewer, Guadagnini and Gajser, winning his third MXGP race of the year.

A 1-1 result gave Renaux a fast-track ticket to the top step of the podium, as the rookie celebrated his first ever MXGP overall victory. Coldenhoff placed second after going 5-2 in the races, ahead of Bogers who made his return to the box since Portugal for third overall.

Gajser failed to mount the podium after another tough weekend, though remains the championship leader in MXGP with a 66-point advantage over Renaux, while Seewer remains third in the standings.

Maxime Renaux: “It’s really great for me. First overall win in MXGP with a double race win and like you said, it’s a nice [birthday] gift for my mum. Actually, the deal was to get the Fox Holeshot for her but I couldn’t unfortunately. But the day was great, I felt great on the track, had a good feeling from Saturday and then some good starts today. Two consistent races, no mistakes and yeah took the race wins. So, I’m really happy and waiting for my home GP next week!”.

Glenn Coldenhoff: “Before the GP we did some testing and we improved pretty much everything that we were struggling with before. But now we are on the way up. Last week, the podium and now this week again. Obviously it was a very tough day, yesterday was really good winning the qualifying for a good gate pick today. But before the first race, I made a huge crash in the sighting lap and then I felt a bit dizzy in that first race. The first race was really tough for me but still I managed to get to fifth which was good. In the second race, I was pushing really hard in the beginning, I passed Maxime and he passed me back, so it was a good battle. Then Jorge crashed and I moved into second position and was following Max, but he was too strong today. Anyway, second overall, it’s another good weekend and like I said before, just going upwards for me”.

In the first MX2 race of the weekend, it was Hutten Metaal Yamaha Racing’s Rick Elzinga who took the Fox Holeshot from the far outside gate. Though Monster Energy Yamaha Factory Racing’s Jago Geerts was quick to get himself into the lead. Mike Gwerder of WZ Racing Team also started well as he was right there in the mix with the leaders before dropping to fourth and the further down the order.

By the end of the opening lap, Red Bull KTM Factory Racing’s Tom Vialle was already up to second, as Diga Procross KTM Racing’s Liam Everts went off track and into the banners. He got going again in 23rd.

Moments later, Geerts had a big crash, which was a gift to Vialle who moved into the lead. F&H Kawasaki Racing’s Kevin Horgmo then fought his way up to second after getting by Elzinga, but he had to work for it, as the Dutchman was not backing down easily.

Geerts got going again in 21st, as Team Ship to Cycle Honda SR Motoblouz rider Stephen Rubini got by Hitachi KTM Fuelled by Milwaukee’s Isak Gifting for fourth, as Red Bull GasGas Factory Racing’s Simon Längenfelder was looking to do the same.

Horgmo then crashed as did Gifting, twice, which allowed Längenfelder into third by the eighth lap, as Rubini moved up to second.

Further down the field, Everts was making a stellar come back after crashing on the opening lap. He passed Spain’s David Braceras to move up to eighth, and the made some more impressive moves to eventually climb up to sixth.

Horgmo looked to fight back after the mishap of lap seven as he caught back onto the rear wheel of Elzinga and passed him in the same place as he did in the beginning of the race. This got him up to fourth. Meanwhile Geerts was up to 12th.

On lap 10, Rubini got passed by Längenfelder who was already too far behind the race leader to be able to challenge for the win and in the end Vialle won the race by 14.280 seconds. Rubini held on to third ahead of Horgmo and Monster Energy Yamaha Factory Racing’s Thibault Benistant who fought his way from outside of the points to fifth.

In the second race, the Fox Holeshot went to Everts, but again, Geerts was fast to make a move into the lead, with Vialle third, Jorgen-Mathias Talviku of Sahkar Racing fourth, ahead of Längenfelder and Horgmo.

Vialle got a good run as he tried to pass Everts, though the Belgian didn’t make it easy and forced Vialle to work for it for almost three laps. In the end by the third lap, Vialle was in second.

Benistant had another unlucky start to the race, though despite being down in 20th in the early stages of the race, he set the fastest lap of the race. Down the order was also Horgmo who struggled in the first few laps to make any big passes.

Guillem Farres of Rath’s Motorsports was running well in sixth after passing Talviku and then continued to challenge inside the top 10 until the end of the race.

Back with the leaders, Everts found himself coming under fire from Längenfelder for third. The German pushed hard, and a couple of small mistakes almost saw him crash, though he held on and continued his fight with Everts. The pair battled for a few laps before Längenfelder moved into third on the sixth lap.

Geerts was looking good in the lead for six laps too, before crashing once again. This allowed Vialle to take over control of the race, but the Belgian got up quickly and was able to remain in second.

In the closing stages of the race, we saw Big Van World MTX Kawasaki’s Mikkel Haarup going after Everts for fourth. But again, the Belgian put up a strong fight and managed to keep hold of the position until the chequered flag.

Vialle went on to win the race with a 10.923 advantage over Geerts, while Längenfelder crossed the finish line third ahead of Everts and Haarup.

A perfect 1-1 scorecard gave Vialle his fifth GP win of the season, with Längenfelder finally getting back on the box for second overall ahead of Geerts who finished third.

After a tough first race, Geerts lost valuable championship points which has allowed Vialle to take the red plate as we head into the Monster Energy MXGP of France next weekend. Vialle now leads by 10 points. Längenfelder remains third.

Tom Vialle: “Was definitely a great weekend for me. In the first race, Jago had a massice crash, kind of the same as me in Mantova which was quite scary so I’m glad he’s ok. But I just controlled the race and had quite a gap on Simon, something like 15 seconds, so I just controlled the race. In the second race, Jago had a small crash and I could pass for the lead. I felt really good on the track and also on the bike. It was a great weekend before the French GP and I’m really looking forward to that as I think it’s going to be nice race for me”.

Simon Längenfelder: “Two really good races. In the first race I had a good jump out of the gate but messed up the first few corners a little bit and dropped to seventh… Some guys crashed and I benefitted from that and in the end, I also made some passes and finished second. In the second race, I also got a good start and then I passed Liam but I couldn’t really get away from him, though I controlled it and finished third and I am happy to be back on the box”.

Jago Geerts: “Yeah, I’m ok after the big crash in the first heat. I slipped on the take-off. It’s another big crash but I’m really happy to walk away from that one. In the second race, I was quite happy to finish second, I did some damage control because I wasn’t feeling really great and didn’t have the best feeling on the track but still finished second, so it was okay and I didn’t expect to be on the podium, so that’s nice”.