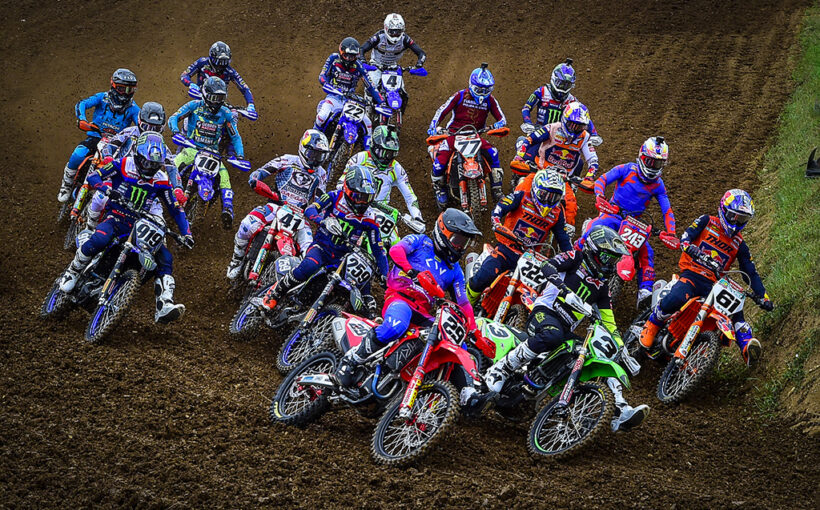 MXGP is off to Oss!

The FIM Motocross World Championship returns to the Netherlands this weekend for this year’s Dutch Grand Prix in Oss!

Over the years venues such as Lierop, Assen and Valkenswaard have all hosted the Dutch Motocross Grand Prix, though this season the MXGP of the Netherlands will take place somewhere different as it will celebrate the return of a former World Championship venue of the 80’s, that is Oss.

The Dutch track, located in the south of the country and less than 50km from Eindhoven, first opened its doors in 1980 and was then better known as ‘Witte Ruysheuve’. Five years later, in 1985 the track presented the Motocross World Championship Grand Prix, which saw home rider and former 125cc World Champion, Dave Strijbos victorious.

The club then organised another two GP’s in Oss in 1989 and 1998 which were dominated by American Mike Healey and Italian Alessio Chiodi. Now 23 years later Oss will make a comeback to the FIM Motocross World Championship to host what is bound to be an exciting race weekend!

Alongside the usual MXGP and MX2 races, the MXGP of the Netherlands will also see rounds of the EMX250 and EMX Open Championships. In the European 250 category Fantic Factory Team Maddii rider Nicholas Lapucci leads the championship over SM Action Racing Team’s Kevin Horgmo and Cornelius Toendel from Riley Racing Yamaha. Meanwhile in EMX Open, after an incredible performance in Maggiora two weeks ago, Filippo Zonta leads over Nicholas Dercourt and Davide De Bortoli. With both championships tight on points, it will be interesting to see who will come out on top this weekend.

As we enter the first sand race of the season, there’s no doubt that all eyes will be on Red Bull KTM Factory Racing’s Jeffrey Herlings. As many of us know, Herlings is very strong in the sand and has won the Dutch Grand Prix a total of 14 times since 2010, including 10 wins in MX2 and 4 in the MXGP category.

Coming off the back of a GP victory in Maggiora two weeks ago, Herlings will enter his home round with a nice confident boost after three GP’s on a hardpack base, he will be back on a terrain he prefers a lot more and has been dominant on in the past, so a win for the Bullet is highly likely.

A rider who could challenge him for the win is Monster Energy Yamaha Factory Racing’s Glenn Coldenhoff. For Coldenhoff the races in Oss will be a true home GP as the Dutchman grew up in the area. With the confidence of a podium finish in Italy, where he was tied on points with Herlings for the GP win, as well as the support of the home crowd, Coldenhoff will be strong and a real threat.

Meanwhile Team HRC’s Tim Gajser will be looking to claw back as many championship points as he can with a solid weekend. In Maggiora Gajser failed to place on the podium, though his chances of a podium this weekend are pretty high. Last year in Valkenswaard the Slovenian put on an incredible performance to go 1-2 for second overall. He also won twice in Lommel during the Belgian triple-header so there’s no question that Gajser can ride in the sand and will be one to look out for.

There’s also Red Bull KTM Factory Racing’s Antonio Cairoli who has been in incredible shape lately. After failing to score points in the second race in Orlyonok, Cairoli came back fighting in Matterley Basin to take his first GP win of the season and the followed that up with another strong performance in Maggiora going 3-3 to tie on points with Herlings and Coldenhoff. Cairoli has always been a good sand rider having won the Dutch and Belgian GP’s more than a handful times, so it wouldn’t be a surprise to see him on the top step once again.

Of course, there’s also Romain Febvre of Monster Energy Kawasaki Racing Team who managed his first race win in Maggiora, though the second heat was much tougher and cost the Frenchman a podium and championship points. Despite that he is still third, just two points ahead of Cairoli, so of course he will be keen to pick up as many points as he can to keep his spot.

Monster Energy Yamaha Factory Racing’s Jeremy Seewer and Ben Watson will also be looking for more this time around, with both riders getting top 10 results in Maggiora. The pair are also known to be good in the sand so it could be another GP that we see all three factory Yamaha riders inside the top 10 again.

Last season, Rockstar Energy Husqvarna Factory Racing’s Arminas Jasikonis finished third overall in Valkenswaard during the Dutch Grand Prix after two solid third place finishes. This season, Jasikonis is yet to pick up points after making his return from injury, but with the first sand race of the year taking place this weekend, we could see the Lithuanian climb up the order as he gets another race under his belt and becomes more confident.

In MX2, F&H Kawasaki Racing’s Roan Van De Moosdijk is bound to be one of the main protagonists for the podium in Oss. After coming close to a top three overall finish in Orlyonok and Matterley Basin, Van De Moosdijk will be pushing for his first podium of the 2021 season and racing at home will for sure give him some sort of advantage. His teammates Mathys Boisrame and Mikkel Haarup cannot be ruled out either, with Boisrame showing huge improvements in the sand last season and so far this year he has been consistently fighting at the top end of the field.

Another one of the biggest threats for the win will be the Monster Energy Yamaha Factory Racing MX2 squad. All three riders, Jago Geerts, Maxime Renaux and Thibault Benistant have what it takes to lead races. Belgian born Geerts of course has the biggest advantage being a very strong sand rider, but Renaux can perform on the soft stuff too, as he proved it in Valkenswaard last season where he finished second on the podium. And of course, Benistant will be full of confidence after his race one victory in Maggiora. So, all three riders could put on a show this weekend.

One of the biggest questions coming into the Dutch Grand Prix was whether or not we will see Red Bull KTM Factory Racing’s Tom Vialle make his return. Unfortunately, Vialle will sit out the races in Oss after two difficult GP’s due to a broken hand. The broken bone in his hand is almost healed but anymore stress could be a setback for the defending World Champion, therefore the Frenchman made the decisions to not take part in this weekends races. At the moment Vialle is down in 11th in the championship standings, 63 points down on the leader Mattia Guadagnini.

For Guadagnini the upcoming races will be a real test to see if the Italian can perform just as well on sand as he had in the hard pack races so far this season, as well as to see whether having the red plate add any extra pressure or whether the rookie will be able to keep it together and put in another two solid races and continue his podium success.

Of course, Honda 114 Motorsport’s Ruben Fernandez will also want to get in on the action and stay within the top three in the championship. Fernandez has shown his fierce side these past few races, getting involved in some strong battles for top positions in every race that he has lined-up for. The races in Oss will be another opportunity for the Spaniard to solidify himself as a title contender this season after some very good races so far.

Another rider who will be looking to put on his best performance will be Rockstar Energy Husqvarna Factory Racing’s Kay De Wolf, who will enter his home Grand Prix in the MX2 World Championship class for the first time. Two weeks ago, both De Wolf and Beaton had some good races, both finishing inside the top 10 and battling within the top 5 together at one stage too. For the De Wolf this will be an opportunity to shine and show what can be expected later in the season as he gets more confident.