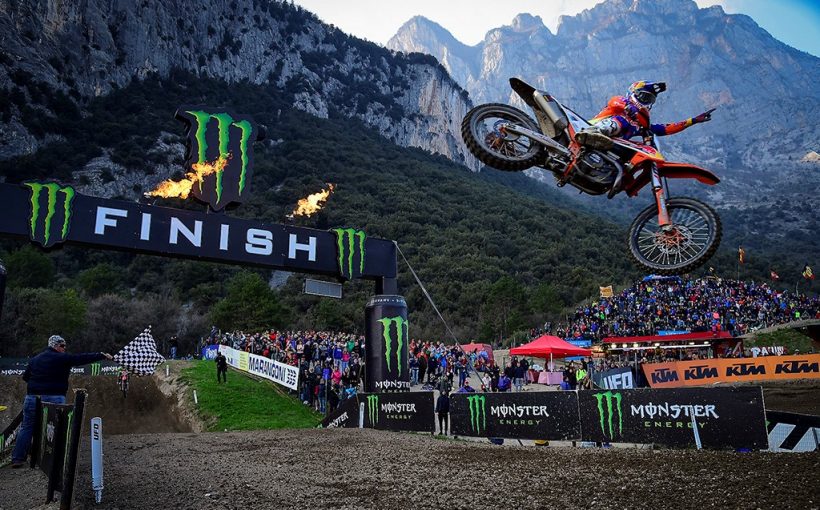 The MXGP of Trentino is well underway in the North of Italy. Today’s qualifying races were dominated by the Red Bull KTM Factory Racing riders of Jeffrey Herlings and Jorge Prado. Both rocketed to strong starts in front of the Dolomite Mountains and thousand of Italian motocross fans. With perfect weather expected against a stunning backdrop tomorrow while be even more entertaining.

The MXGP and MX2 riders weren’t the only ones racing today as the support classes of WMX and EMX125 presented by FMF Racing also took on the Pietramurata circuit. WMX Race 1 was the first points paying race of the weekend and Germany’s Larissa Papenmeier took full advantage as she passed Nancy van de Ven early in the race and held off the charges of defending champion MXFONTARACING Yamaha’s Kiara Fontanesi during the later stages. Both van de Ven and KTM Silver Action’s Amandine Verstappen where able to capitalize on a last lap crash from Fontanesi respectively finishing 2nd and 3rd behind Papenmeier and just in front of Fontanesi.

In the first race of EMX125 Presented by FMF Racing Emil Weckman took the lead off the start and stayed in front each of the 15 laps as Emilio Scuteri and Mieco Vettik swapped between second and third with Scuteri taking the better result of the pair. Meanwhile last round’s double race and overall winner Rene Hofer rode the pack to finish 4th.

Meanwhile Team HRC’s Tim Gajser was caught in a first turn crash and had to fight his way back from dead last all the way up to 17th.

Back at the front Herlings grew his lead up until the finish where he crossed the line 22 seconds ahead of Cairoli. Apart from the pass of Febvre on Desprey the top eleven riders stayed in the same position all of the 13 laps.

Red Bull KTM Factory Racing’s Jeffrey Herlings in the press conference said: “So far everything is positve, it was a good Saturday, which doesn’t always mean a good Sunday but it definitely feels good to start off the weekend in this way.”

Red Bull KTM Factory Racing’s Antonio Cairoli: “It is always nice to be here in Italy and race in front of the home fans and media. Today went good and I know that it is only Saturday so if we managed to have a good start also tomorrow we will fight for the win, that is always the goal. I really like the track and atmosphere here so we will do our best to be on top and have a good weekend overall.”

Team HRC’s Tim Gajser: “I’m feeling good actually but today didn’t go the best, in the qualification race I crashed in the first corner so I started dead last and came back to 17th but it isn’t that bad because on this track you can start from everywhere quite good. Hopefully tomorrow I can get good starts, ride smarter, and be consistent because that is the most important.”

The #61 looked extremely comfortable today as he pulled away from Rockstar Energy Husqvarna Factory Racing’s Thomas Kjer Olsen. Prado led Olsen by just over 12 seconds up until the final lap where he backed of the pace to claim his first pole position of 2018.

On lap 4 Covington took over 4th by passing Jacobi along with Kemea Yamaha Official MX Team’s Ben Watson. 3 laps after Covington’s and Watson’s passes on Jacobi it was Mewse who came under pressure from the American and fellow Brit. Covington took 3rd from Mewse quickly but for Watson the resistance was stronger.

After searching for a way past Mewse for three laps Watson made a pass stick and at the finish it was Prado, Olsen, Covington, Watson, and Mewse taking the first five gate picks for tomorrow’s pair of races.

BIKE IT DRT Kawasaki’s Darian Sanayei did not start the qualifying race while Honda 114 Motorsport’s Hunter Lawrence started but only completed 5 laps. Both riders official status for Sunday is unknown.

Red Bull KTM Factory Racing’s Jorge Prado in the press conference stated: “I got my first GP win here so I have really good memories and today I felt great, I had good start and took the win so I’m really happy with the today.”