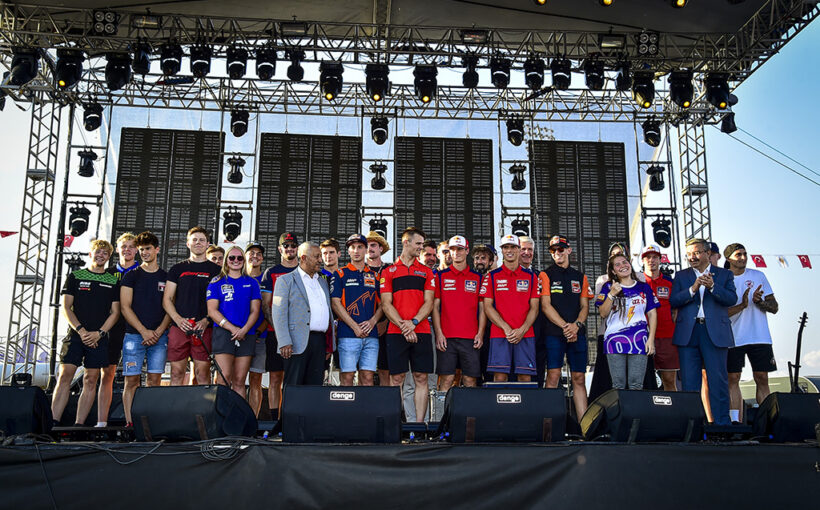 The 2022 Bitci MXGP of Turkiye was officially declared open following the inaugural ceremony which was held at the main stage of the Afyon Moto Festival area where a large crowd of local fans gathered to celebrate the final round of the FIM Motocross World Championship!

The evening began with speeches from the officials which included Infront Moto Racing COO Daniele Rizzi, FIM President Jorge Viegas, Afyonkarahisar Governor Kubra Guran Yigitbasi, Afyonkarahisar Mayor Mehmet Zeybek, Afyonkarahisar Deputy Ibrahim Yurdunuseven, Turkish Motorcycle Federation President Bekir Yunus Ucar who were received on stage by an enthusiastic crowd of local fans as they welcomed everybody to Afyon and shared their excitement for the finale and the return of MXGP to Turkiye.

Infront Moto Racing COO Daniele Rizzi: „It’s an honor to be in Afyonkarahisar for the 2022 Bitci MXGP of Turkiye. Thank you so much for having us there once again after 5 years. We have been here also during the Pandemic time, and it was a very excellent event for everybody, fans, teams and riders. Sunday we’ll have a new World Champion celebration and having the chance to have it together with this festival it will a good chance for the fans to enjoy even more and have fun. I would like to thank the local authorities, the new Governor, the FIM and the National Federation to make this event possible with such high standards and great facilities that make this venue one of the best of the calendar. It’s really a pleasure to be here and we are looking forward to many other years!“

FIM President Jorge Viegas: “I’m very happy to be here in Turkiye for MXGP. Thank you for the very good work that was done in these years to make this event possible. I hope that the riders and the teams will enjoy the last races of the season, especially because we’ll see the new MX2 World Champion crowned on Sunday. Once more I would like to thank everybody present here for welcoming me in Afyonkarahisar. I wish you All a fantastic weekend!“.

Afyonkarahisar Governor Assoc.Dr. Kübra Güran Yiğitbaşı: „We are very pleased to welcome the best riders in the world. Motocross is one of the most enjoyable sports. It is also a special honour for us to see our rider Irmak racing with the best riders. We thank our President for making us live this honour under the auspices of the Presidency.”

Emphasizing that Afyonkarahisar has organized the race for the fifth time in its fourth year, Afyonkarahisar Mayor Mehmet Zeybek said, “We are bringing Afyonkarahisar and Turkiye to the world agenda with the great interest of our youth“.

Türkiye Motorcycling Federation (TMF) President Bekir Yunus Uçar: “We will race here for many years together with Afyonkarahisar. We are extremely happy to host the best of the world in Turkiye under the auspices of our President and to host the final races of MXGP here this year.”