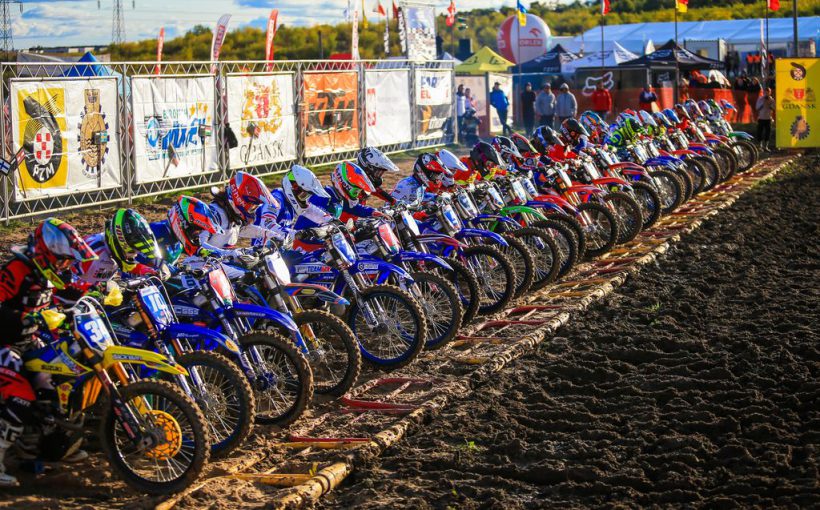 Team Italy and Team Germany top the charts in the MXoEN and WMXoEN Qualifying Races.

The Motocross of European Nations saw the qualifying races today for the men’s and the women’s category at the Gdansk circuit, here in Poland. While most of the day was cold and cloudy, the sun made an appearance just in time for the start of the qualifying heats.

While in the WMXoEN it was Team Germany’s Larissa Papenmeier and Anne Borchers who topped the charts with 10 points, followed by Team Netherlands‘ Nancy van de Ven and Shana van der Vlist in second with 11 points and Team Belgium’s Amandine Verstappen and Brenda Wagemans also with 11 points in third position.

In 125/250cc Qualifying heat Team Denmark’s Mikkel Haarup got a flying start out of the gate, closely followed by Team Estonia’s Jorgen-Matthias Talviku and Team Italy’s Morgan Lesiardo. Meanwhile Sweden’s Rasmus Varg was forced into the pits with what looked like a bike issue, but later re-joined the session.

In lap two, Haarup was slowly edging away from Talviku in second, as Team Russia’s Daniil Balandin moved into 3rd followed by Kevin Horgmo of Team Norway in 4th. Horgmo was looking to make a pass on Balandin and was able to do so on lap 3. Also moving up was Team Spain’s Ruben Fernandez as he found his way past Balandin and Team Italy’s Morgan Lesiardo.

By lap 5 there was an intense battle for 7th place, between Balandin, Finland’s Emil Silander, Team Poland’s Szymon Staszkiewicz, Greece’s Emmanouil Kritikos and Czech Republic’s Dusan Drdaj. In the end it was Silander who made the move into 7thplace.

Meanwhile, Mikkel Haarup continued to extend his lead over Talviku as Horgmo, who was seriously chasing down the Estonian rider, by the following lap was able to get the job done and move into 2nd; at that point was 11.2 seconds from the race leader Mikkel Haarup. Also making a move was Ruben Fernandez who chased down Talviku for 3rdplace.

With Horgmo moving fast in second and the lappers starting to effect the leader, the race lead was slowly decreasing and with one lap to go Horgmo was just 6.8 seconds off the lead, although this was not enough as Haarup went on to take the win for Team Denmark.

In the youth group of the 85cc class, it was Team Denmark’s Mads Fredsoe with brilliant start and an early lead in the race followed by fellow Dane, Lucas Bruhn and Sweden’s Saku Mansikkamaki.

Team Latvia’s Karlis Alberts Reisulis made a quick move into second placed followed by Bruhn and Team Italy’s Valerio Lata in third. Meanwhile Greek rider Dimitrios Ganotis made a small mistake in a turn before pitlane, which cost him a few positions.

By lap two there was already a change for the lead as Reisulis continued to charge forwards as the new race leader. The 65cc Junior World Cup and EMX65 winner, Vitzslav Marek made his debut on the 85cc bike and was sitting in 12th place and moving ahead at a good pace.

Then Team Hungary’s Laszlo Mark Tecsi was coming under fire by Matteo Luigi Russi of Italy and one look over the shoulder by Tecsi gave Russi the go ahead as he made the pass on the next corner at the end of pitlane. Later Russi also made a pass Mads Fredsoe as he moved int 3rdbehind his team-mate who was 2nd.

The battle between Reisulis and Lata for the lead carried on for the majority of the race, with Reisulis slowly making a run for it as he extended a small gap between himself and the Italian rider. With just one lap to go, Jaka Osek of Slovenia pulled into the pits with a bike issue, and despite re-joining the race, he was a lap down and finished in 36th.

At the end it was a race win for Karlis Reisulis (LAT), followed by Valerio Lata (ITA) and Matteo Luigi Russi (ITA) in third.

Last, but certainly not least, it was time for the ladies from the WMXoEN to go out and do their thing. And it was Nancy van de Ven of Team Netherlands starting with the holeshot, closely followed by Amandine Verstappen of Team Belgium and Kylie Fasnacht of the USA.

Meanwhile, Team Germany’s Larissa Papenmeier moved into second place ahead of Verstappen and Fasnacht, knocking the two riders down to third and fourth.

By lap 3, van de Ven was already making a run for it with a 4.108 second gap between her and Papenmeier. But looking to make a move on the German rider was Verstappen followed by Sweden’s Emelie Dahl who found her way past USA’s Fasnacht, meanwhile Fasnacht’s team-mate, Jamie Astudillo was down in 17th position.

Next it was time for Team Denmark’s Sara Andersen to make the move on Anne Borchers (GER )as she moved up to 7th. The following two laps saw bad luck for the Danish team, as both Andersen and Line Dam crashed, with Dam loosing 6 positions and down in 14th position.

Meanwhile, the backmarkers were starting to make an effect on the leaders as the gap between van de Ven and Verstappen was slowly decreasing. Denmark’s Sara Andersen was making a good comeback as she made a pass on Anne Borchers putting her back in 6th place.

With just one lap to go Team Spain’s Gabriela Seisdedos Ramos made a mistake which cost her two positions, allowing Line Dam and Italy’s Francesca Nocera to move 13th and 14th, with Dam making another pass on the last lap for 12th place.

So, it was a race win for Nancy van de Ven, from Amandine Verstappen in second and Larissa Pepenmeier in third.