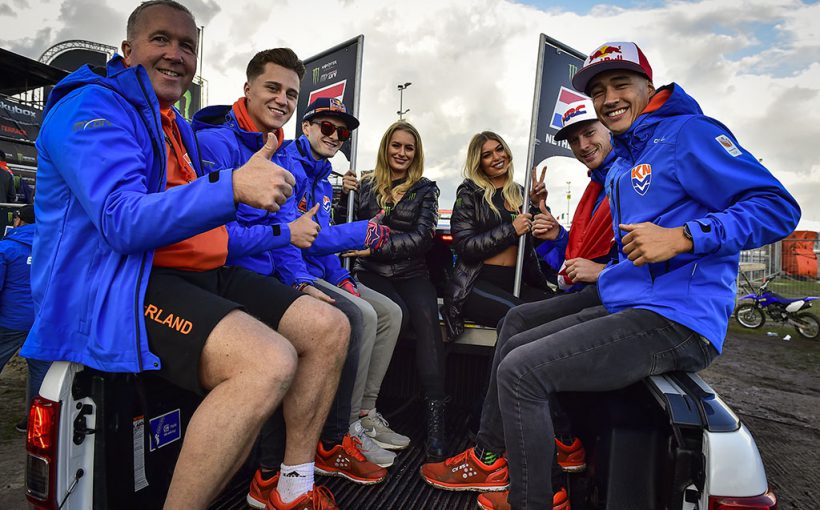 2019 Monster Energy FIM Motocross of Nations Kicks Off at Assen!

The world’s most exciting motocross racing event of the year has officially kicked off at the legendary Assen TT circuit. This weekend the tarmac has once again been transformed into a deep sand motocross track that will test riders from all over the world.

The event has made its way back to Europe in the Netherlands, a country where the original event began back in 1947, although this will be the first time that Assen are officially hosting the prestigious event at the TT circuit, with the Motoclub Assen having previously organised the 1954 MXoN in Drenthe.

34 countries in total are competing at this year’s event, so the contest to make it into the Sunday’s event will be fierce, as only 20 countries will be lining up for the main races of the 2019 Monster Energy FIM Motocross of Nations.

Youthstream CEO David Luongo:  “Ladies and Gentlemen, we are very proud to be here in Assen to host the Monster Energy FIM MXoN for the very first time. We have a great event in front of us full of activities. As every year, the Monster Energy FIM Motocross of Nations is the biggest off-road event of the year. It’s also the most unpredictable event of the season, always with a lot of surprises and a lot of passion from the fans, it’s the event that nobody wants to miss. So, I’m sure that this year like in the past it will be very exciting and I wish all of you to enjoy this weekend and have great racing”.

FIM/CMS Director Antonio Alia Portela: “Assen’s sandy TT-Circuit is an awesome venue to hold the Monster Energy FIM MXoN event and when the grandstands are crowded with people from around the globe, those who are watching us from their favourite places at home I am sure they would wish they were here with us breathing the special atmosphere that can be lived here at the Nations”.

2019 Monster Energy FIM MXoN of Assen Organizer Lee Van Dam: “We are very honoured to be the host of the 2019 Monster Energy FIM Motocross of Nations. We are Dutch, so we hope that Patrice (Team Manager Team Netherlands) and his team will do the work: for the first time in history we hope that the Dutch team can be champions of this event. Thank you very much and we wish you a very good weekend and you enjoy the racing”.

Following an introduction from the officials, it was then time for teams France, The Netherlands, Great Britain, Australia, USA, Belgium, Spain and Italy to share their expectations for this weekend, concluding the press conferences for today.

Gautier Paulin of Team France will be running the number 1 plate at his 11th consecutive MXoN, speaking about this weekend’s event he said: “I’m really looking forward to it, we have a really good team and a nice track. There’s actually a lot of changes to the track, the track is much faster and more fun I think to ride and also looking really good for the public”.

“It’s an exciting race. Anything can happen, we see also last year in Red Bud. We know it’s going to be a tough track, so we’ll have a lot of fun” he added.

Team Netherlands are among the favourites to win this year, with the event being held in their home country, and speaking about the pressure to win, Netherlands’ Team Manager, Patrice Assendelft said: “This event is very special for us. In our own country a lot of spectators expect it and of course we want to win it.”

“The first time the motocross of nations ever was held in 1947 also in the Netherlands and now so many years later we’ve never won it. 3 times second in a row, which is a good achievement and last year I think we became second because of the bad luck, I think that we did have the best team.” He added. “But every year is a year and of course we are the favourites but at the end of the Sunday we will know how everything went so this is a very special weekend and anything can happen, so just wait for it.”

Also hoping to win the Chamberlain trophy this year are Zach Osborne, Jason Anderson and Justin Cooper of USA. Speaking about their expectations, Osborne said: “We would like to be on the podium and if things go our way, we feel that we have a chance to win. We’ve seen in the past years where it’s not always the fastest team that wins, it’s just the best team and it’s hard to accept that as a racer in this sport often, that it is for a team and not for the individual; you’re not out there to win for yourself, it’s about as selfless as you can be as a motocross racer this race because of the team aspect of it”.

Then it was time to introduce this year’s teams to the eager fans, who lined the start line to see 34 countries present their 3 riders to represent them at the 73rd Monster Energy FIM Motocross of Nations.

Starting with the 34th team, Poland and wrapping up the presentation with defending champions, France and ending with a bang as Team Netherlands sent the crowd wild in anticipation for Saturday and Sunday’s racing.

Making a return, for the second year in the row since being introduced last year at the USA Monster Energy FIM MXoN was the second annual Pit Bike of Nations, where we saw mechanics, riders, journalists and the public represent their country in a battle for victory. This year Fox and Monster Energy joined as partners for the event, with the winning team receiving a specially designed Fox helmet. Yamaha were also onsite to provide the riders with the bikes for the racing.

The race was not short of action and excitement as each rider battled through the specially built track for the occasion. Team Italy took the win with USA taking the stand in second and third on the podium was Sweden.

The evening was finished off with the ballot to determine the starting grid for tomorrow’s racing, with Poland with the first gate pick and Lithuania and Puerto Rico lining up second and third, for the qualifying heats.

Today’s events, including the press conferences, the team presentation and the Pit Bike of Nations were LIVE streamed on MXGP’s Facebook page, while the racing this weekend, including the Yamaha bLU cRU races, will be available LIVE on MXGP-TV.com.