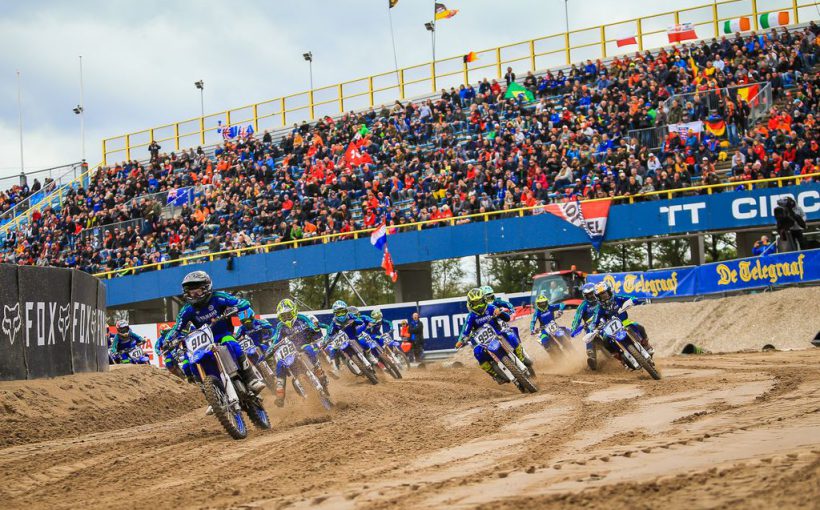 After two thrilling days of riding on the international stage for the first time at the Monster Energy FIM Motocross of Nations, the 2019 YZ bLUcRU FIM Europe Cup started on Saturday as for the first time in the history the bLUcRU program was split into 65, 85 and 125 classes, totalling nearly 100 of the most promising young Yamaha riders in Europe racing on the same track as the pro MXGP riders.

Beginning with a damp opening free practice session in the morning, the YZ65 youngsters were the first competitors to ride the newly built sand track. Followed by the 85 and 125 classes, the YZ bLUcRU relished the opportunity to test their machinery and talents on the world stage for the first time, having made the cut for the SuperFinale based on their respective national championship results.

The YZ65 and YZ85 classes held their SuperFinale races on Saturday also, putting on two thrilling races for the packed Assen grandstands. In the YZ65 field of 36 entrants local rider #484 Dex Kooiker set the pace in timed practice on a lap of 2’17.979, followed by Latvian rider #727 Jëkabs Kubulins and Swedish rider #777 Freddie Bartlett. As the race came around and the gate dropped Kubulins took the holeshot, establishing a commanding lead at the front. Behind him a close fight for second and third ensued, Swedish rider Bartlett starting well to hold second ahead of Dane #80 Frederik Rahn Stampe. With the sun shining track conditions improved and aided Kubulins in maintaining his lead to take the chequered flag by 12.2s, joined on the podium by Bartlett and Rahn Stampe in second and third.

Following straight on from the youngest riders, the YZ85 class took positions at the gate. In timed practice Dutch rider #567 Levi Schrik set the pace with a 2’04.096, just edging out Norwegian #78 Adrian Bolviken in second ahead of Swedish rider #192 Hamilton Eriksson. As anticipation built for another gate drop in quick succession, the 27 YZ85 youngsters took their starting positions. Schrik made a quick getaway ahead of Bolviken, with a strong start from Swede #910 Olle Mårtensson propelling him up the order. A close battle for the top five places ensued, Mårtensson dicing with Schrik for the lead while Bolviken and Eriksson battled for the final podium place. Ultimately Mårtensson’s pace proved strongest, taking victory by 11 seconds ahead of Schrik and Bolviken who fended off a tough attacked from Eriksson.

The top three finishers and two carefully chosen wildcards in each SuperFinale category will now be picked to attend the bLUcRU Masterclass 18, 19 & 20 November in Spain, where they will hone their skills further under professional tutelage as they begin their international racing journeys.

The YZ125 riders had their race on Sunday to close the 2019 YZ bLUcRU FIM Europe Cup SuperFinale and begin another exciting chapter in the Yamaha story.

The YZ125 riders faced heavy rain and different conditions on Sunday at the TT Circuit Assen, contesting the last 2019 SuperFinale race after the YZ65 and YZ85 riders competed on Saturday.

As the gate dropped practice leader Pumpurs took the holeshot to establish a very strong lead. Behind him Bruce also built on his practice pace to take second, battling with Spanish rider #252 Raul Sanchez behind. As the track got more challenging every rider put their head down over the 20-minute race. With Pumpurs sitting unchallenged in first place he took the victory nearly a minute clear, followed home by Sanchez, who battled past Bruce, in second and third respectively to complete the podium at the weekend’s most difficult and entertaining bLUcRU SuperFinale race.

For Pumpurs, Sanchez and Bruce, the bLUcRU Masterclass awaits on 18, 19 & 20 November in Spain, where they will be joined by two carefully selected YZ125 wildcards as they further develop their riding skills under expert tutorials and guidance. From the Masterclass, one of the five YZ125 riders will then win a place with the MJC Yamaha Official EMX125 team for the 2020 EMX125 Championship.

At the same time, a new chapter begins for every YZ bLUcRU rider at the SuperFinale as they have made the first steps towards careers in international racing.