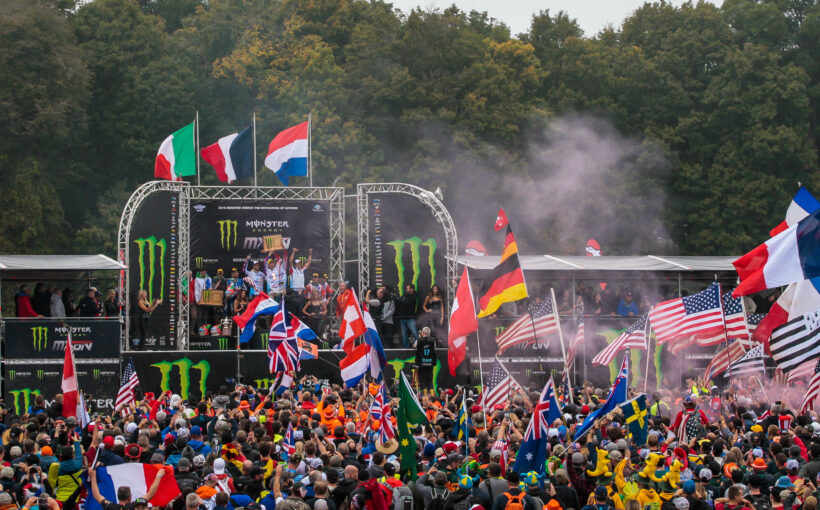 The Monster Energy FIM Motocross of Nations will make its much-anticipated return to RedBud in Buchanan, Michigan this weekend for the 75th edition of the event which promises to be bigger and better than ever before!

Since the success of the 2018 Monster Energy FIM MXoN, everyone has been eager to see the event return to ‘America’s Motocross Track’, where home fans hope to see their local heroes Team USA back on the top step after an 11-year drought.

This will be the second time that RedBud will host the biggest motocross event of the season, and the fifth in total in the United States. The US first hosted the Monster Energy FIM Motocross of Nations in 1987 at Unadilla with Bob Hannah, Rick Johnson and Jeff Ward contributing to USA’s 13-year winning streak that ran between 1981 and 1993.

Team USA is of course one of the favourites heading into this weekend. Having won a total of 22 times, more than any other nation, the Americans are looking to get back on top after not winning a single event since their last victory in 2011 at Saint Jean d’Angely. This year the team consists of Eli Tomac, Justin Cooper and Chase Sexton, with Sexton making his very first Monster Energy FIM MXoN appearance.

There is no doubt the trio will feel some kind of pressure, since the only time the US team was ever beaten on home soil was in RedBud 2018, but with the support of the home crowd and a very strong line-up, we could see the Americans back on top!

Meanwhile, Team France will be looking to repeat their success from 2018, when the nation scored their fifth consecutive victory with Gautier Paulin, Jordi Tixier and Dylan Ferrandis. Of course, Dylan Ferrandis will be back on the team this time around alongside Maxime Renaux and Marvin Musquin, with the trio a real threat for the Chamberlain Trophy once again.

Team Australia’s Mitch Evans, Hunter Lawrence and Jett Lawrence are another big threat for the top spot this year with a very strong team line-up. With Evans strong in MXGP and the Lawrence brothers shaking things up in the American series’ – this trio is one that could gift Australia their very first victory at the Monster Energy FIM Motocross of Nations.

Team Great Britain is also a team to look out for with Dean Wilson, Max Anstie and Tommy Searle representing the Union Jack in the USA. The British squad has some history too, having won the event 16 times and is second in terms of the most wins as a nation. Wilson, Anstie and Searle are also the trio that began Team GB’s podium streak in 2017 at Matterley Basin where they finished third and since then, the squad has placed third for the last four events consecutively and will be looking to end their weekend with another medal to make it five!

Team Italy with Antonio Cairoli, Andrea Adamo and Mattia Guadagnini are the defending champions this year after their victory on home soil last year in Mantova. Having tasted victory last year, the motivation will be high.

Though Team Netherlands will also arrive hungry for the win after losing the title last year by just a single point to the Italian team. The team made up of Glenn Coldenhoff, Kay de Wolf and Calvin Vlaanderen will aim to clinch the nation’s second title, since their first win in Assen of 2019, a team that both Coldenhoff and Vlaanderen were a part of. Vlaanderen will also be looking to put the heartbreak of his time in RedBud last time around, behind him and focus on bringing home a solid result, while Coldenhoff will be looking to dominate just like he did in 2018 when he went 1-1 in his heats.

Also, Team Spain with Jorge Prado, Guillem Farres and Ruben Fernandez is a strong team who is likely to score top positions, along with Team Belgium with Jago Geerts, Liam Everts and Jeremy Van Horebeek, as Everts is set to make his debut for the Belgian squad, while Van Horebeek is set to make his 11th event representing his home country, which will also be the final time for the Belgian who announced his retirement.

Team Japan’s, Yuki Okura, Jo Shimoda and Kota Toriyabe are another trio to look out for this year, as well as Team South Africa’s Tristan Purdon, Camden Mc Lellan and Cameron Anthony Durrow.

This Monster Energy FIM Motocross of Nations will be full of big milestones as we celebrate the 75th edition of the event that began in 1947. This year, Team Estonia’s Tanel Leok will compete at his 20th Monster Energy FIM Motocross of Nations while for Team Germany’s Max Nagl this will be his 17th appearance, as Team Ireland’s Martin Barr will represent his nation for the 16th time. Others celebrating big milestones include Antonio Cairoli who will make it his 15th appearance, Jeremy Van Horebeek and Team GB’s Tommy Searle will line up for the 12th time, as well as Glenn Coldenhoff and Team Switzerland’s Jeremy Seewer who will ride for their country for the 11th and 10th time!

A total of 34 teams, including special teams from FIM Europe and FIM Latin America, will participate in the 75th edition of the event with the action promising to be bigger and better than ever with a very competitive line-up that makes the podium hard to predict!