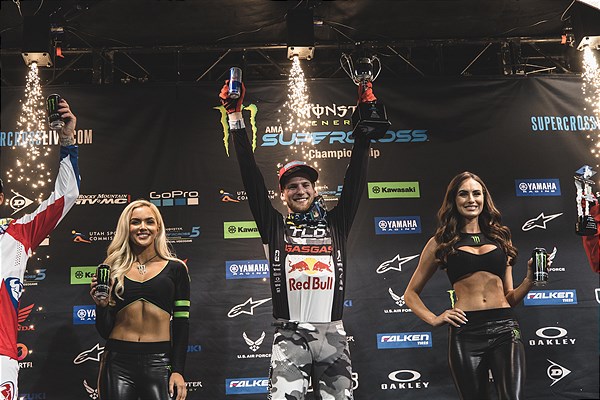 BARCIA OVERCOMES A TOUGH NIGHT WITH TOP-10 FINISH AT ROUND 3.

He did it! With a flawless performance at the third round, Michael Mosiman has captured his first AMA Supercross victory aboard the MC 250F! Not to mention, it’s GASGAS Factory Racing’s first win in the 250SX class and what better place to celebrate than our North American “hometown race” in San Diego! Troy Lee Designs/Red Bull/GASGAS Factory Racing teammate, Justin Barcia, salvaged ninth after a crash in the Main Event but he still holds fourth overall in the 450SX standings.

It’s been a long time coming for Mosiman, who has been steadily chipping away at his first victory in the 250 class. Qualifying a strong third overall, Mosiman kept the ball rolling with a top-three start in the heat race. He quickly jumped into second early on and set himself up to challenge for the lead, which ended in a close second-place finish.

It was all Mosiman off the start of the Main Event as he took command with a nice holeshot aboard his MC 250F. He built up a solid lead through the first half of the race but lapped traffic started to play a role in his lead gap. Fending off some serious pressure later on in the race, Mosiman kept his cool in the final laps to put a stamp on his first-career win in the 250 class.

Michael Mosiman:“It’s a huge blessing to get the win and even what that means for the points now. It feels awesome to re-pay all the good people who have believed in me for so long – and to prove them right – feels really good. It’s been a long time coming and it’s a long journey, I’m just stoked to be able to pull it off. I can’t thank my team enough!”

For Barcia, it was a long night but he came out with a smile on his face knowing that he’s still in the championship battle. With a fifth-place start in the heat race, Barcia ran inside the top-three early on. He moved in second and battled behind the leader for most of the race but he got passed just before the checkers, bringing it in for a third-place finish.

In the Main Event, Barcia found himself outside the top-10 off the start but he clicked off some early laps to get into 10th early on. Despite going down, he was able to bounce back and fight his way back to a ninth-place finish on the night.

Justin Barcia:„San Diego is a wrap and honestly, for a bad day, it was a good day. I got an average start in the main but I was riding good and then I ended up having a crash. I had to re-group and put a charge all the way back up to eighth. Ninth definitely wasn’t where I wanted to finish but I salvaged it. I felt like I rode really well, just came up a bit short of where I wanted to be. All-in-all, I’m looking forward to getting back to Anaheim, a place that treats me well, and I’m ready to get back on the podium!”

The Troy Lee Designs/Red Bull/GASGAS Factory Racing Team will return to racing next Saturday, January 29 for Round 4 in Anaheim, California.