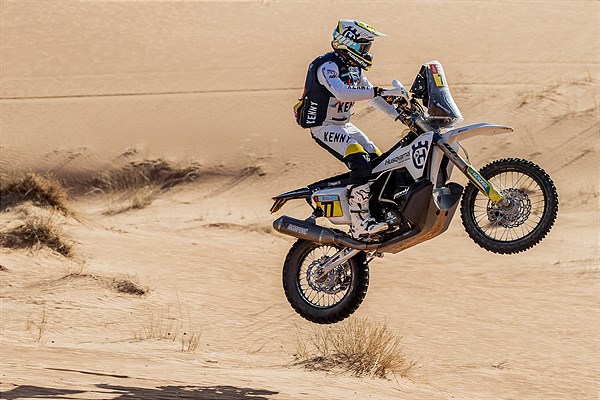 Continuing to deliver solid results on the long and massively challenging days of the Dakar Rally, Husqvarna Factory Racing’s Luciano Benavides has finished as seventh quickest on the long, 395-kilometre special on stage eight. Overcoming the usual yoyo effect, where riders starting near the front lose a considerable amount of time to their rivals before going on to earn an advantageous starting position for the following day, Benavides was able to maintain good speed on the stage with a minimum of mistakes. Ultimately, he completed the route just under 10 minutes behind the eventual stage winner.

After a steady start through the early kilometres of the stage where he focused on his navigation, Luciano was able to hold his position just inside the top 10 for the majority of the tough, mixed terrain timed special. Where some of his rivals faltered, Benavides was able to maintain his focus and bring his FR 450 Rally to the finish in an extremely commendable seventh place, nine and a half minutes down on the quickest time for the day. His result moves the 26-year-old up to 14th in the provisional overall standings.

Now, with his consistency paying off, and his 2022 Dakar Rally campaign going from strength to strength, the young Argentinian is looking to maximise the advantage he has for Tuesday’s 491-kilometre stage nine and make up more time on those starting ahead of him.

Luciano Benavides:“Stage eight was a really long day. As usual it had some tricky navigation but also had a really big mix of terrain with big plateaus and dunes, rocky tracks and valleys, and some canyons too – it was really good fun to race through. The stage was fast, and conditions were windy too, but I was able to do a good job of my navigation and so I’m really happy with that. My speed was also good considering I was up near the front. Altogether I’m very happy with how the day went and now I’m looking forward to pushing once again tomorrow.”