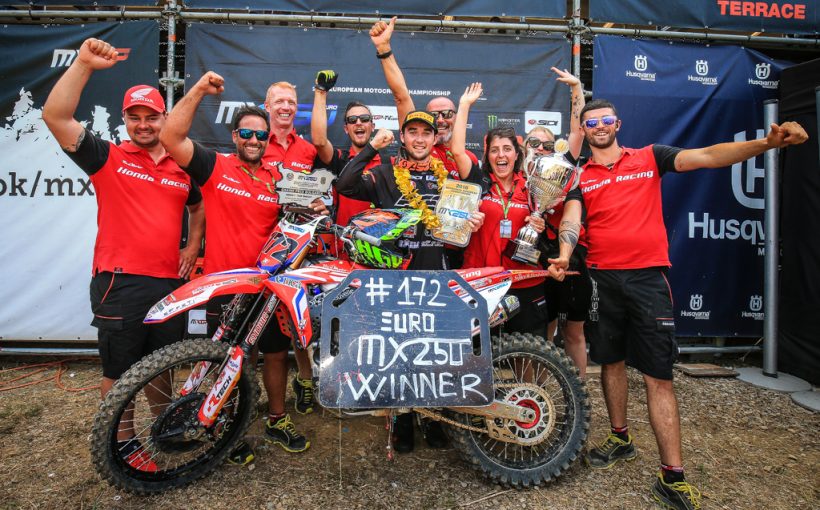 The first overall winners have been crowned at the 2018 Sevlievo stop. The European Motocross Championship classes of EMX300 presented by FMF Racing and EMX250 finished their Bulgarian weekend this morning with Verde Substance KTM’s Brad Anderson taking the overall victory but the bigger news was the Overall win of Honda RedMoto Assomotor’s Mathys Boisrame which crowns the Frenchman 2018 EMX250 Champion!

Steep hillsides and challenging track conditions put the riders in a battle for position, championship points, and traction. The beautiful track and surrounding nature hosted thousands of fans as they watched some of the best riders fight in what was the penultimate round in both of the European Championships.

EMX250 Race 1 was the last event on track Sunday and followed the two Qualifying races of MXGP and MX2. The track was much changed with new lines since the morning practice sessions. BUD Racing Monster Energy’s Brian Moreau was the fastest in the time practice giving him first gate choice which he took full advantage of to take the holeshot.

KTM Silver Action’s Gianluca Facchetti was 4th and battled with Michael Ivanov the majority of the race. Ivanov took the position from Facchetti on the 7th lap but the Italian took it back 5 laps later.

REVO Husqvarna UK’s Mel Pocock lost his radiator cap at the start of the race and later collided with another rider sending the Brit out of the race with a DNF. Apico Factory Racing Honda’s Steven Clarke had multiple mishaps and fell from 8th to 15th before eventually finishing 13th. At the finish it was a race win for Moreau which marked the first of his EMX250 career as Boisrame took second followed by Vialle, and Facchetti, while Ivanov took the final spot in the top 5.

Today’s EMX250 Race 2 followed the Warm Up sessions of MX2 and MXGP which left the track with fresh but with good lines. Race 1 winner and top qualifier Moreau lined up to the gate after last minute repair work was done to his bike in the waiting area. Moreau had a decent jump of the grid but lost out on the start to Boisrame and Ivanov. Moreau then got out of shape on the roller section leading to the first uphill losing more positions.

Ivanov started to attack Boisrame for the lead while Facchetti tried to capitalize on the pair’s brief battle. Just further back Moreau collided with Vialle and got caught up in the back of the KTM. Moreau’s race was over but Vialle refocused and charged up to 2nd by Facchetti on lap 2.

ASTES4-TESAR YAMAHA’s Roan van De Moosdijk took 3rd from Facchetti a lap later and eventually charged past Vialle for second. Boisrame’s title adversary Pocock started the race in 5th but dropped to 6th by the finish which gave Boisrame the points required to clinch the 2018 EMX250 Championship one round early!

Boisrame came into 2018 with 1 overall victory to his name in 2017 and 2 race wins. This year the young French rider reached the top step of the overall podium 5 times with 6 individual race wins. His season turned around massively after the opening round of the year at RedSand, Spain where he took 18th overall with a 15th and a 19th. The eight points scored in Spain was multiplied in Portugal however when his double race wins gave him 50 more points. In Russia Boisrame struggled again scoring 23 points from the two races combined. Latvia proved to many including himself that the success of Portugal was no fluke as he took his second overall victory of the season. The Frenchman continued his success into his home race where he claimed the championship leader’s red plate. Now at the tenth round of the eleven this season Boisrame has claimed the title which seemed so distant in Spain and can rest easy as the 2018 FIM Europe 250 Motocross Champion.

Jumping to the Saturday’s first race was the EMX300 presented by FMF Racing and leading with a holeshot was GL12 Racing’s Mike Kras while Youri van t Ende ran second briefly before red plate holder Brad Anderson jumped past on his Verde Substance KTM during the opening lap.

Erik Willems battled with Vaclav Kovar moving to 4th before getting by van t Ende prior to the end of the first official lap. The early top 3 remained in the same positions throughout the race but Kovar took 4th from van t Ende who fell another spot to iFly JK Racing Yamaha’s Manuel Iacopi.

Today the 300cc 2 strokes were again the first on track with sighting laps leading start into the first race of the morning. Kras was the fastest off the gate for the second day in a row but had Anderson just behind him. Willems was running up in third while Iacopi was under pressure from Kovar for 4th.

Anderson took the lead from yesterday’s race winner Kras quickly and pulled a small lead but Kras pulled the gap back down the following laps. Kovar took bad jump off of the grid back was up into 4th by lap 3 shuffling Iacopi back.

At the front Kras pushed Anderson hoping for a mistake but eventually made an aggressive pass for the lead. The pass squeezed Anderson nearly off track on one of the many uphill sections. Anderson retaliated quickly and the pair battled vigorously with each passing attempt more intense than the prior. Anderson managed to retake the lead and for several laps Kras chased closely by mistakes from the Dutch rider slowed his momentum and cost him to lose focus.

Anderson pulled away to take the race win and the overall balancing the points out to where they started coming into Bulgaria, 27 ahead of Kras which leaves the championship to be decided at the new round of Imola. Kras heads into the break before Imola with a second in both the race and the overall while Kovar made a pass to take 3rd with only 2 laps to go in Race 2.