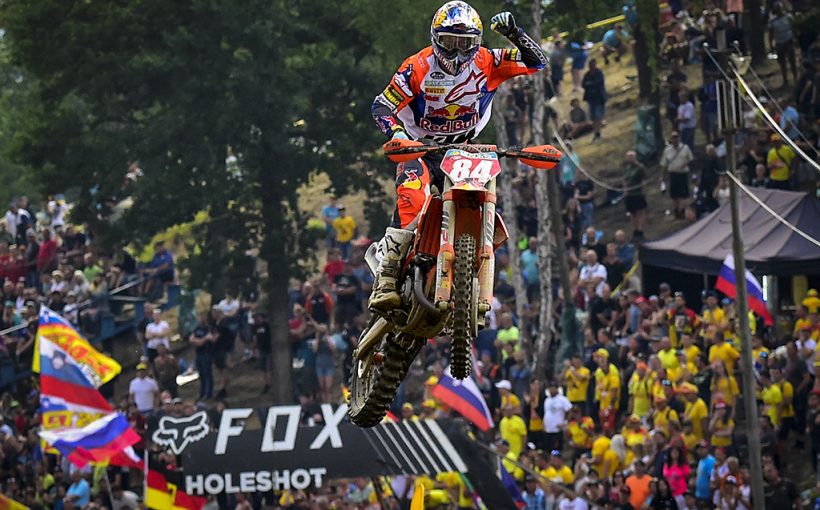 The iconic Grand Prix circuit of Loket hosted the FIM Motocross World Championship today for the 14th round, the MXGP of Czech Republic. The busy weekend held one of best races of the year where Red Bull KTM Factory Racing’s Jeffrey Herlings and Jorge Prado took hard earned victories.

The hills on the Czech circuit create some of the most challenging conditions in the World Championship. Fans from various neighboring countries joined in this weekend’s action by creating an amazing atmosphere which pushed the riders to go even faster. Not to mention, the entire weekend took place just above the beautiful castle town of Loket.

MXGP’s two points leaders and standout Red Bull KTM Factory Racing riders, Jeffrey Herlings and Antonio Cairoli both came into the weekend on the mend. Cairoli with the more recent fractures to his thumb and Herlings with the newly plated collar bone. The injuries provided no change in the racing however as both led the field throughout the weekend.

At the gate drop of MXGP Race 1 Cairoli was fastest but Herlings was quick to take the Sicilian’s lead. The spectator favorite this weekend was Team HRC’s Tim Gajser who’s following made the trip from Slovenia to cheer him on. Gajser’s start placed him in the battle for the top 3.

Gajser was followed by Rockstar Energy Husqvarna Factory Racing’s Gautier Paulin and Gebben Van Venroy Kawasaki’s Alessandro Lupino. Gajser’s focus was however on Cairoli as he latched on to speed of the 9-time champion.

Paulin was first to make a mistake when he fell at the top of the uphill to Pit Lane allowing Lupino and Monster Energy Kawasaki Racing Team’s Clement Desalle past. Desalle continued to make gains with a pass on Lupino.

Monster Energy Yamaha Factory MXGP’s Jeremy Van Horebeek was also on the move forward climbing from 8th on lap one to pass Red Bull KTM Factory Racing’s Glenn Coldenhoff and Paulin before making it by Lupino for 5th.

At the front Herlings continued to grow his lead and Cairoli kept Gajser at bay. Lupino would lose a position back to Paulin before having one more taken by Monster Energy Yamaha Factory MXGP’s Romain Febvre. At the finish of Race 1 Herlings took the win 31.99 seconds ahead of Cairoli, Gajser, Desalle, and Van Horebeek.

Race 2 started nearly identical for Cairoli and Herlings with another Fox Holeshot going to the Italian but the first official lap belonged to Herlings. Gajser was again 3rd and Paulin 4th but Van Horebeek was off to an improved 5th. Wilvo Yamaha Official MXGP’s Shaun Simpson was also riding much better than recently in 6th before losing a spot to Febvre.

Both Van Horebeek and Febvre found a way past Paulin in the same corner on lap 7. The following lap the Yamaha riders switched positions with Febvre in 4th and Van Horebeek 5th. Herlings began to find his rhythm and better lines around the halfway points which gave him the extra edge to pull a gap over Cairoli.

At the finish Herlings won, with Cairoli 2nd, then Gajser, Febvre, and Van Horebeek rounded out the top five. In the overall the podium was clear with the top 3 the same as in both races Herlings, Cairoli, and Gajser while 4th and 5th were taken by Febvre and Van Horebeek.

Jeffrey Herlings: “To come home from Loket with 50 points is amazing! I’m really looking forward and I’m extra motivated for Lommel. There is 2 more months this season and I can’t wait for the next 6 races to come!”

Antonio Cairoli: “We couldn’t really do much but I am really looking forward to another week of rest where I’m going to try and heal up 100%. I think in Lommel I can be close to where I was before, hopefully we can make another battle and go for the top spot.“

Tim Gajser: “Overall I’m happy to be on the podium in front of such an amazing crowd, everybody was cheering and for me it was a good weekend.“

Though the MXGP races were pretty clean cut the MX2 class was wildly unpredictable and thrilling until the final checkered flag had flown and the scores were tallied.

MX2 Race 1 kicked off with the now common Fox Holeshot from Red Bull KTM Factory Racing’s Jorge Prado. Closely behind the KTM of Prado was the Rockstar Energy Husqvarna of Thomas Covington while his teammate Thomas Kjer Olsen came through the first corner in dead last.

Jonass found a way into the top 5 in lap 2 while Vlaanderen passed Cervellin for 3rd. 2 laps later Cervellin was dropped further back as both Jonass and Honda 114 Motorsport’s Hunter Lawrence made passes on the Italian. Clawing their way through the field after poor starts were Thomas Kjer Olsen and Kemea Yamaha Official MX2 Team’s Ben Watson.

Just before halfway through the race Vlaanderen gained massive ground on Prado in second and by lap 10 was past the Spaniard. Vlaanderen’s confidence showed in his riding and 4 laps after passing Prado he was pressuring Covington for the lead.

With 4 laps to go Vlaanderen claimed the lead and gapped both Covington and Prado. Across the finish Vlaanderen won by 2.5 seconds over Covington with Prado 3rd, Jonass 4th, and Lawrence 5th.

Prado’s holeshot prowess showed again in Race 2 for his 17th Fox Holeshot of the season. One of the few other riders to score a holeshot this year is Jacobi who was second on the first lap today. Covington was 3rd and struggled to make it past Jacobi until lap 2 at which point Prado had grown a sizable gap.

Again 6th on the first lap was Jonass with Yamaha SM Action M.C. Migliori’s Maxime Renaux just ahead. Vlaanderen was back in 8th behind Watson who fell on the finish during lap 3 and would be unable to rejoin after his bike was damaged. Jonass charged past Olsen and Jacobi after also getting Renaux. The moves of Jonass got him to third behind Covington who responded and started to close on the lead of Prado.

Vlaanderen was also charging forward and was one of the fastest rider on track with the exception of the start. By the 7th lap the HRC rider was up to 4th and closing on Jonass who had lost ground to Covington. In the later stages of the race Vlaanderen was all over Jonass for third and the pair swapped positions before the #10 made a pass stick.

Jonass then lost ground to Olsen while his teammate Prado was losing time to the other Husqvarna of Covington. Olsen made his pass on Jonass with 3 laps to go but Covington wasn’t able to do the same for the lead. Making stabs at Prado for the race win and overall proved fruitless and Covington was forced to settle for 2nd. With Prado taking the win, Covington 2nd, and Vlaanderen 3rd the overall went to Prado’s 3-1 opposed to Vlaanderen’s 1-3 while Covington’s 2-2 gave him the final podium spot. Prado’s victory combined with the 4th overall from Jonass gives the Red plate to Prado for the first time in his career with a 11 point advantage heading to Lommel in 2 week’s time.

Jorge Prado: “Already yesterday everybody was riding really fast and today again. It was hard in the first race battling from the beginning till the end. I am really happy with the win and now leading the points”

Calvin Vlaanderen: “I feel really good, I had such a good weekend. When I woke up this morning I felt really well and thought this was a day that I could really prove myself and fight for a win. I am really happy on my weekend.“

Thomas Covington: “Considering everything it was a really solid weekend for me getting the win yesterday and two consistent races today. I am happy to be on the podium.“