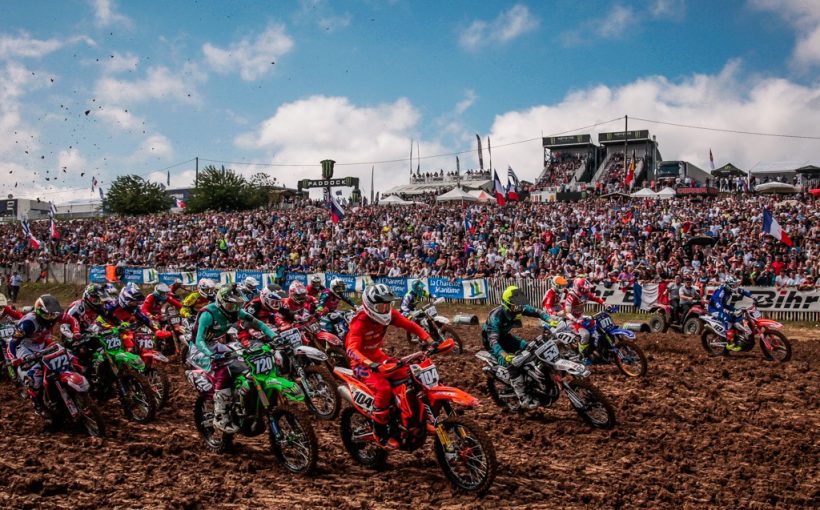 Joining the MXGP and MX2 racing this weekend was the European championship classes of EMX250 and EMX125 presented by FMF Racing. An amazing rider turn out in both classes led to 2 groups for each where in the end only 40 Qualified to race in each. Taking the overall victories at the French race were Honda Redmoto Assomotor’s Mathys Boisrame and Team Maddi Racing Husqvarna’s Mattia Guadagnini.

The success of the winners was aided by the thousands of French fans cheering them on from the edges of the circuit. The hillsides, packed with passionate motocross fans, came to life as the gate dropped for the races. The atmosphere is unmatched by any race so far this season and the memory of winning in front of the massive crowd will stick with both Boisrame and Guadagnini.

The final race of Saturday was the EMX250 class where Honda Redmoto Assomotor’s Mathys Boisrame fought against his fellow French competitors for the win. At first it was BUD Racing Monster Energy’s Brian Moreau who held second but he lost 2 positions letting Tom Vialle take over the runner up spot and ASTES4-TESAR Yamaha’s Roan Van de Moosdijk into 3rd.

Coming into the weekend REVO Husqvarna UK’s Mel Pocock was leading Boisrame by 9 points in the Championship Standings. Pocock was 5th on the opening lap and by lap 7 he was into 4th past Moreau. Valentin Teillet also passed Moreau a lap after Pocock but continued forward and passed the #119 2 laps later. Moreau found some more speed on the final lap to pass Pocock back and take 5th.

Clarke worked to catch Goupillon and was successful but not able to make a pass. Just slightly further back Boisrame pursued Moreau and took the position from the #225 after a mistake. Moreau however responded a lap later and reclaimed 3rd.

Across the finish Goupillon won the race ahead of Clarke, Moreau, Boisrame, and Sydow. In the overall standings Boisrame took the victory and the red plate while Moreau was second and Van de Moosdijk claimed 3rd after scoring vital points by passing 2 riders on the last lap of race 2.

Leading off the start in Saturday’s Race 1 and never looking back was Yamaha Europe EMX125’s Thibault Benistant at what is his only home race of the season. Benistant created a massive lead which continued to grow throughout the race.

Behind Benistant the battle for second position was on with 3 riders duking it out for the spot. Running in 5th during the early part of the race was KTM Junior’s Rene Hofer who came into the weekend with a massive points lead. On lap 5 Hofer started to make passes and by lap 7 the Austrian found his way up to 2nd.

Today’s Race 2 was held in the morning and the riders where the first on the track after an overnight storm. The already challenging Saint Jean d’Angely circuit pushed the riders and their machines to perform at the highest level today.

Taking the early lead was Guillem Farres Plaza from Spain but after 3 laps in front he was out of the race along with Team VRT’s Tom Guyon who was third on the first lap before moving to second. With the early leaders out of the racing Mattia Guadagnini found himself in the lead.

After only two laps completed the red plate holder Hofer was down and unable to restart his bike. Rick Elzinga found himself in a strong 2 for 5 laps before dropping to 7th and an eventual 15th. Elzinga’s teammate and Race 1 winner Thibault Benistant was up into 5th by lap 4 which was his position on lap 12 of 13. Unable to complete the final lap Benistant lost a position to James Scott but was the first of a handful of riders to complete 13 laps.