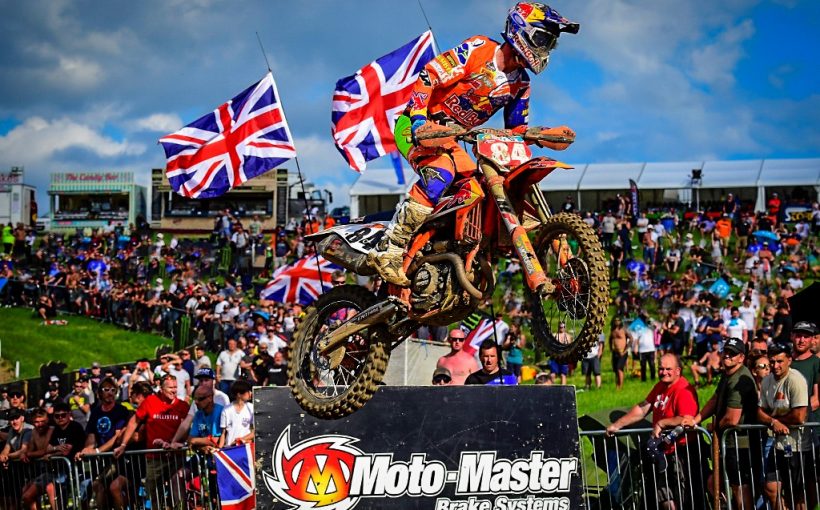 The 2018 edition of the MXGP of Great Britain is complete under sunny skies at the Matterley Basin circuit. Eager British fans lined the track witnessed some of the best races of the season so far and saw Red Bull KTM Factory Racing’s Jeffrey Herlings and Pauls Jonass assert themselves as undisputed winners.

The unusually sunny British weather was scorching hot and when combined with the nearly 2,000 meter circuit provided testing but epic conditions for the world’s best motocross riders. The stadium like venue gave perfect viewing for all in attendance as the racing action kicked off.

Aside from the wild MXGP and MX2 racing the FIM Veterans Motocross World Cup was action packed with riders like last year’s winner, Martin Zerava, who won the VMX in 2014 and 2017 too, the 2 time Motocross World Champion KTM Rocket Juniors Mickael Pichon, and multi time GP winner Mervyn Anstie all joining in the racing. Saturday’s Race 1 was led from start to finish by Zerava while Pichon worked his way back to the front after a bad start while Anstie crashed out. Anstie crash looked worse than it was fortunately but a fracture to his collar bone plus some injured ribs left him out of racing Sunday. When the racing returned Sunday so too did the dominant performance from Zerava with Pichon again second for a surprising result. Finland’s Niko Kalatie rode consistent all weekend taking 2 third place finishes to round out the podium behind Pichon and back to back winner Zerava.

MXGP Race 1 started with a Fox Holeshot from Red Bull KTM Factory Racing Antonio Cairoli just ahead of his teammate Glen Coldenhoff. A few spots further back was the other Red Bull KTM of Jeffrey Herlings, the MXGP points leader.

Team HRC’s Tim Gajser also had a good start and ran third after the start but by the end of the 1st official lap Herlings moved into second as Coldenhoff dropped to fifth behind the surging Clement Desalle on his Monster Energy Kawasaki.

Monster Energy Yamaha Factory MXGP’s Romain Febvre and Jeremy Van Horebeek ran 6th and 7th with BIKE IT DRT Kawasaki’s Tommy Searle in 8th. Febvre later jumped into 5th past Coldenhoff which he held for the remainder of the race.

Searle was looking strong before a piece of plastic caught in his chain started to distract the Brit. Meanwhile Monster Energy Kawasaki Racing Team’s Julien Lieber was gaining ground and with 4 laps remaining Lieber took a spot from Searle along with Wilvo Yamaha Official MXGP’s Jeremy Seewer. Searle took the 9th back when Seewer fell in a turn and lost a handful of positions before finishing fourth.

Back at the front the battle was on between Cairoli and Herlings. A bad lap and some mistakes left Herlings in a position to take the lead but Cairoli fought back and the two carried on for the next laps. With 2 laps to go Herlings dove to the inside of Cairoli and both bobbled with Cairoli going down. Herlings took the race win but Cairoli got up quickly and managed second with Gajser 3rd.

Race 2 started just the same with Cairoli taking the FOX Holeshot and Herlings around 4th with Febvre and Desalle in between. Meanwhile Gajser lost traction and had a big save in front of Pit Lane. After the first few corners Herlings was already into 2nd and chasing down Cairoli while Desalle took 3rd from Febvre.

The front two started to pull away from Desalle after a couple of laps as both were setting their fastest laps each time around. On lap 6 Desalle fell, letting both Febvre and Gajser through before remounting his Kawasaki.

Gajser then started to close on Febvre coming within passing distance several times but couldn’t make it through. As Gajser continued to try to get by Febvre it was Desalle who ended up making it past the Slovenian.

When the 2 lap board came out Herlings was still behind Cairoli by a few seconds and realized he need to make a pass for the lead. As the pair started the final lap and came down the start straight into the first turn Herlings spotted his opportunity and took the spot! Herlings’ pace on the final lap resulted in the fastest lap of the race with a 2:19.285 and gave him the race win for maximum points and the clear overall. Herlings win gave him his 100th World Championship podium as Cairoli finished 2nd and Febvre took 3rd.

Jeffrey Herlings: “I am very happy to be here in this spot and to win… we made it happen and it’s a pleasure. It was a great race, both times I managed to get the lead, the first race 2 laps until the end and in the last race it was in the last lap, it was an amazing fight and a great way to get my 100th podium.”

Romain Febvre: “I am really happy to be on the podium again as the last few weeks have been tough…”

Much like in the MXGP class tension is building within the MX2 championship as Red Bull KTM Factory Racing’s Pauls Jonass and Jorge Prado each try to assert themselves as the top rider. Prado who won yesterday’s Qualifying Race by a near mile took the Race 1 Holeshot but Jonass responded before the pair excited turn 3.

On the same lap as Covington’s move forward his teammate, Olsen, was shifted back by Team HRC’s Calvin Vlaanderen. The following lap both Vlaanderen and Olsen moved Fernandez down the running order.

Things then started happening fast for the #70 of Fernandez dropping another 2 positions the next lap and 4 more after that. Olsen however found his groove again and passed Vlaanderen back and went even further forward to pass Covington. Olsen then faced a mechanical issue and was unable to finish the race while Jonass and Prado crossed the finish line followed by Covington, Vlaanderen, and Jumbo No Fear Vamo Honda’s Marshal Weltin, who had a stellar ride. Also impressive was Kemea Yamaha Official MX2 Team’s Ben Watson who after having an issue on the start came back from dead last to finish 6th.

Race 2 was another Fox Holeshot from the fast starting spaniard, Jorge Prado. Race 1 winner Jonass was behind Prado from the start but didn’t let the #61 get far away. In third was STC Racing Husqvarna’s Henry Jacobi with Olsen and Vlaanderen giving chase.

Just outside the top 5 was F&H Racing Team’s Jed Beaton in 6th but on his third time around he ejected of the uphill triple and did not finish the race. Inheriting 6th position from Beaton was LRT KTM’s Davy Pootjes.

On around lap 6 the battle for 3rd intensified between Jacobi and Olsen. Olsen went around the outside of Jacobi but the German fought back which caused him to miss his line and as Olsen tried to charge by again Jacobi slammed the door causing Olsen to go down. The battle allowed Vlaanderen to pass both and jump into third. Olsen tried to rebound from the fall but his bike again gave out forcing another DNF.

Just after the battle for third was decided Pauls Jonass charged past Prado for the lead. Meanwhile Watson was again fighting forward after another bad start and with 2 laps to go the British hero took 4th from Jacobi as Jonass won the race ahead of Prado and Vlaanderen. The overall finished the same as race 2 with Jonass on the top step, Prado second, and Vlaanderen taking 3rd for the second time.

Pauls Jonass: “Today I managed to turn it around and in the first race on the start I was just behind Prado and managed to pass him right away. I am happy to go 1-1 again and especially like this because in previous races when Jorge has got the holeshot and a lead he just pulls away, so for me it was good to catch him and pass him in the last laps today.”

Jorge Prado: “It was tough, really tough, he (Jonass) was riding really good this weekend so I did my best and I am happy with that.”

Clavin Vlaanderen: “It is really good to get back to back podiums. There is a big battle for 3rd place on the podium with about 5 guys so it is fun to battle with them, it is good racing and it’s always clean.” 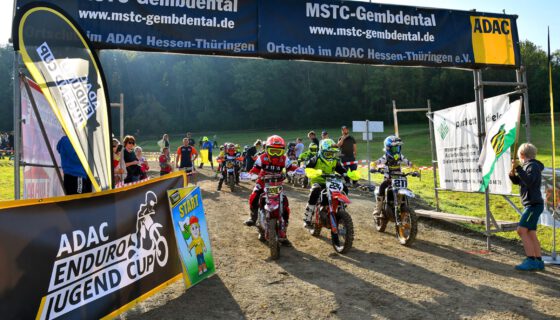 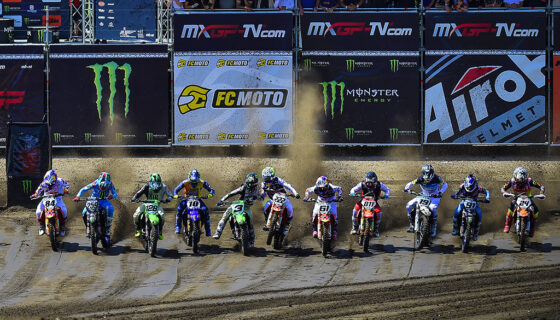 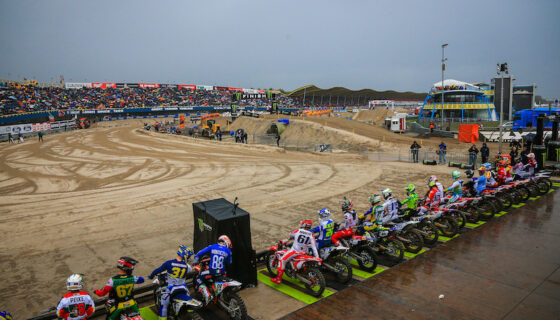 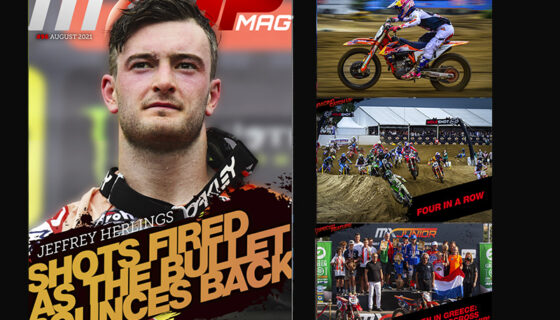