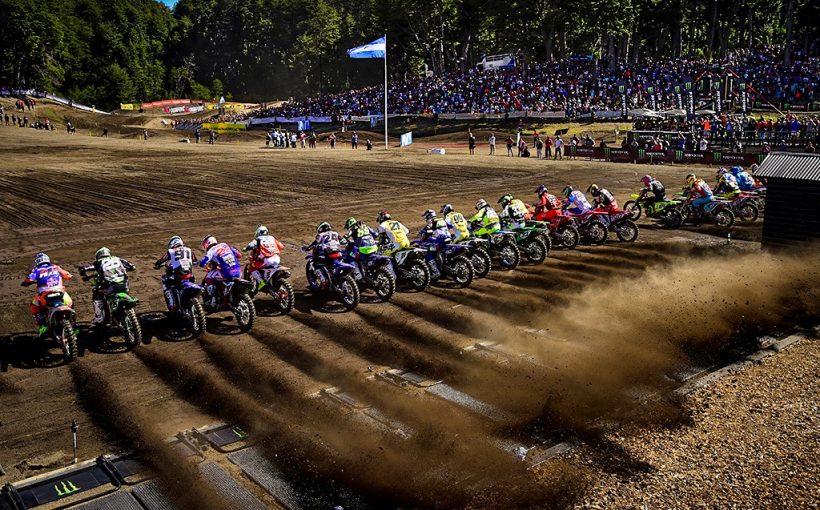 The first day of the highly anticipated 2018 FIM Motocross World Championship racing season is in the books from the scenic landscapes of the Patagonia Argentina. In front of many enthusiastic fans it was the pair of defending FIM Motocross World Champions, Red Bull KTM Factory Racing’s Antonio Cairoli and Pauls Jonass who took the first qualifying race wins of the new season against fierce Competition.

The 9 time and 2017 MXGP World Champion, Red Bull KTM Factory Racing’s Antonio Cairoli hasn’t skipped a beat and though a year older he appears faster than ever. Antonio had some of the fastest lap times in the free and time practice sessions before jumping to the front of the field in the qualifying race. Out front Cairoli rode a strong race through until the finish saying in the press conference: “It is nice for me to start another season, I am really happy that we are here in Argentina, nice weather, a nice track and one of my favorites I would say. I was good off the start and I was 3rd then after the first half lap I could take the lead and I had good rhythm.”

Behind Cairoli the racing was filled with action as Red Bull KTM Factory Racing’s Jeffrey Herlings ran in second position. However a crash took the #84 further back and though he tried to rebound from the mistake, apparent arm pump hindered him any further. Jeffrey qualified in 7th position and will look to reach the podium at the very least tomorrow.

Benefitting from the mistakes of Herlings immediately was Monster Energy Kawasaki Racing Team’s Clement Desalle who took over second position. It wasn’t to last though as Monster Energy Yamaha Factory MXGP’s Jeremy Van Horebeek overtook his fellow countryman from Belgium.
Behind the top three it was Van Horebeek’s Monster Energy Yamaha Factory MXGP teammate Romain Febvre and Wilvo Yamaha Official MXGP’s Shaun Simpson. By the end Febvre nearly caught Desalle finishing just over half a second behind the #25. Simpson however was another 10 seconds back of Febvre where he battled throughout the race with Rockstar Energy Husqvarna Factory Racing’s Max Anstie.

The MXGP rookies, Wilvo Yamaha Official MXGP’s Jeremy Seewer and Monster Energy Kawasaki Racing Team’s Julien Lieber both qualified inside the top ten split by MXGP veteran Rockstar Energy Husqvarna Factory Racing’s Gautier Paulin in 9th with Seewer 8th and Lieber 10th respectively. Lieber in the post race press conference said: “I am really satisfied with my day, I think I was consistent with the result and my speed was actually really good in the qualifying race.”

Jonass in the press conference said: “I am really happy with the new bike and we did some good testing this winter and also we had a really good off season. Today in the race I got a good start and in the first laps I just rode my own race. I always enjoy coming here to Argentina, it is a nice place and like Tony said there is also nice weather this year and it for sure always nice to start the season with a win.” Prado similar to Herlings would ride in second until crashing in the technical wave section of the track.

Taking second position from Jorge was the Rockstar Energy Husqvarna Factory Racing rider, Thomas Kjer Olsen who earlier found a way around his teammate Thomas Covington. Covington continued to drop positions throughout the remainder of the race and eventually finished 7th even with his good start.

One rider who looked turned heads in his first showing of 2018 was the new recruit to the Kemea Yamaha Official MX2 Team, Ben Watson. Watson worked his way forward throughout the 13 laps and came away with a strong 3rd place.

One of the guys to watch in the 2018 season after a strong finish to 2017 is Honda 114 Motorsport’s Hunter Lawrence. Lawrence had the third fastest lap time in the time practice session earlier in the day and continued to show speed in qualifying finishing in 4th position.

Following Lawrence’s privateer Honda was Team HRC’s new MX2 rider Calvin Vlaanderen. Vlaanderen has had a successful preseason leading up to this weekend and showed why as he flew by riders such as Thomas Covington on his way to 5th.
Another notable rider to mention is Bike IT DRT Kawasaki’s Darien Sanayei who had one of his best performance here last season. Sanayei will head to the starting line 6th tomorrow.